AND THEN…., THERE WAS BILL MAHER

What an interesting turn of events. Days after outspoken Trump-supporter Milo Yiannopoulos appeared on Bill Maher’s panel of idiots where he was subject to a liberal hit-job, the left decided to execute operation McMuffin; a collaboration between liberals and former CIA “never-Trumper” Evan McMullin to strategically release dredged up flippant remarks Milo made about homosexual grooming – which led to a canceled book deal and his resignation as tech editor for Breitbart. With over 1500 sex trafficking and child exploitation arrests in the first month of Trump’s presidency, this was clearly the left’s desperate attempt to try and insinuate some sort of hypocrisy on the right concerning pedophilia. Weak.

Salon.com even DELETED a pro-pedophilia article so that they wouldn’t look like total hypocrites when they ran a story quoting Bill Maher, who took credit for kicking off the Milo smear campaign: 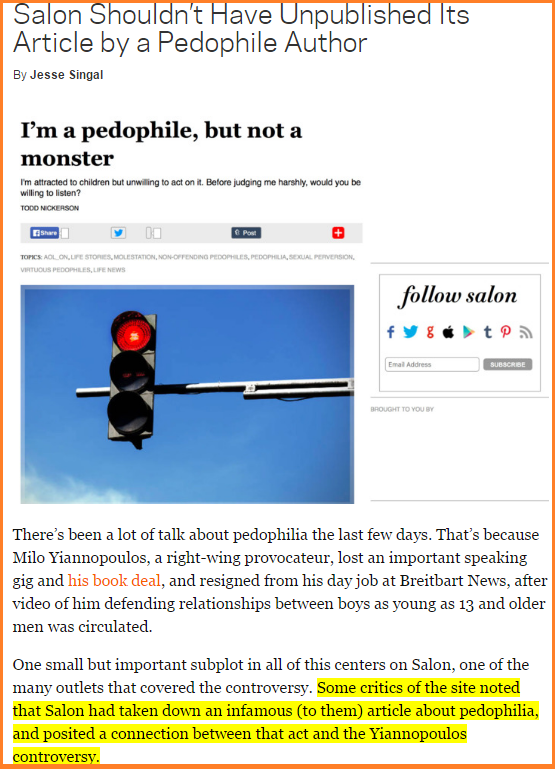 Hours later, thanks to 4chan and Reddit – the tides are turning, and Bill Maher’s about to get blown the fuck out…

Turns out the 61 year old host of HBO’s Real Time With Bill Maher, who attends a $75K / year elite Los Angeles SEX CLUB, is also a huge “fan of pedophilia” as long as the abuser is a woman – as told in a 2007 issue of Playboy magazine:

THIS ISN’T THE FIRST TIME MAHER HAS DEFENDED STATUTORY RAPE!

[Which makes his attacks against Milo perfect hipocracy…, and 100 percent politically motivated.  He is/was nothing more than a progressive hatchet man who “follows orders”. ~B]

While the official DSM definition of pedophilia has an age cutoff of 13, the HBO host vehemently defended former teacher and convicted statutory child rapist Mary Kay Letourneau for having a sexual relationship with one of her students, which began when the boy was 12 – firmly putting Maher’s advocacy for the relationship in pedophile territory.

(Note how Henry Rollins is completely on point?)

At a swanky party in a Beverly Hills, Calif., mansion last Saturday, I spot Bill Maher in a sea of beautiful young women and make my approach.

“Are you a Leo?” I ask the host of HBO’s “Real Time,” while eyeing a lion pendant around his neck.

“No, they make me wear this stupid thing because I’m a member,” he replies, stroking the back of his date, a pretty younger woman in a short black leather dress.

AND THEN…, THERE WAS “SWEDEN”

DO I NEED TO GO ON ABOUT THE EVIL, PERVERTED, DISGUSTING, NEW WORLD ORDER LOVING….MEDIA ???