THE NEW AGE IS ANYTHING BUT “NEW” 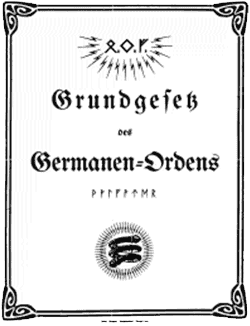 The Thule Society was originally conceived as a cover identity for the Germanenorden which, at the time, was becoming identified with the type of right-wing extremism and virulent anti-Semitism that the various German republican and socialist groups were seeking to weed out and destroy.
In short, the Germanenorden – another magic-oriented, occult society with its secret initiation rituals patterned after Masonic ceremony and its Theosophical-style philosophy encompassing everything from Eastern mysticism to runic lore and occult racial theories – was considered to be a subversive organization and thus a threat to society.

Here is an Interesting Historical Question:  How does what is basically a New Age “Organization“…, filled with people supposedly centered on Spirituality and Meditation…, turn into an ARMY of men and women who want to WIPE everyone else from the planet ??

Many followers of List and Liebenfels in 1900 Germany were not satisfied with the purely metaphysical, meditational, essentially passive and academic nature of the List Society and the Order of New Templars.

It was no longer enough to perform pagan rituals at the summer solstice, or to decode a particularly interesting series of runes found on a rock or described in a forgotten book.

While they devoured ‘Ostara’ and similar publications – and professed to read the longer, more complex books of both List and Liebenfels – they found themselves inflamed by their wild rhetoric and the countless attacks on Jews, Freemasons, Jesuits, Bolsheviks, and Capitalists. 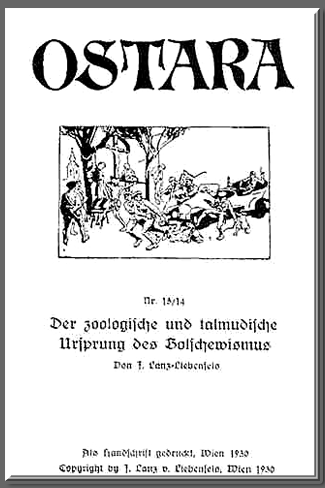 Believe it or not, it actually appears as if the very earliest source of the NAZI’S in Germany was in fact a “group” of very dedicated people who meditated, channeled, and were deeply into the meta-physical world!

They loved the Occult, and were deeply into hidden “magic”.

They were literally the forerunners of our present day NEW AGE MOVEMENT.

So this begs the all important question…, HOW could people who claim to be so loving and enlightened…, stoop to such hatred and chaos and turn into what became known as… THE NAZI’S?

Is there merely a tiny line between so called “spiritual people” who meditate on God, and play around with the channeling out of body entities…, and VERY EXTREME people who would see everyone else on the planet who DOES NOT AGREE WITH THEM…, ERADICATED FROM EXISTENCE??

How do those in the first group literally JUMP into the second group over night?

If the theories and proposals of List and Liebenfels were right — if a war was, in fact, taking place between the forces of Light and Darkness and the fate of the entire human race was at stake – then why wasn’t someone doing something about it ?

To that end, and following the lead of a wealthy (if small-time) industrialist by the name of Theodor Fritsch – whose publishing hobby included an inflammatory anti-Semitic periodical, ‘the Hammer’, and one of the first German editions of the ‘Protocols of the Elders of Zion’, several members of the List Society and the ONT formed their own, ultra-secret and ultra-right-wing society, the‘Germanenorden’(German Order) in concert with a more overt propaganda effort called the Reichshammerbund based loosely on the anti-Semitic diatribes to be found in Fritsch’s ‘Hammer’ magazine.
The Germanenorden had an impressive series of initiatory rituals, replete with knights in shining armor, wise kings, mystical bards, and forest nymphs.
The desire of the founders was to implement a Masonic-style program of secrecy, initiation, and mutual cooperation to counter the imagined conspiracy of Jews and Freemasons with their secret meetings and hidden agendas.
The Germanenorden was formally established — along with the Reichshammerbund – in May of 1912 at the home of Theodor Fritsch.
Things went along fine for a while until World War I broke out and many Germanenorden members found themselves called to the front.

After the World War I was over, the primary members of the Germanenorden, created the THULE Society!

The Thule Society,while ostensibly a “literary-cultural group,” had as its emblem the famous swastika superimposed on a dagger.
The Thule Society front fooled no one, probably – and certainly not its members, who, in the beginning were all Germanenorden initiates, and which included the Justice Minister Franz Gurtner(who would retain that title in the Third Reich),Ernst Pohner, the police chief of Munich, and various titled aristocrats.
Sebottendorffenlisted the aid of young ex-soldier and art student Walter Nauhaus.
Another occultist and a follower of Guido von List, Nauhaus joined the Germanenorden in Berlin in 1916 and in 1918 made contact with Sebottendorff (the Order’s Bavarian master) after moving to Munich.
Heretofore, the Germanenorden and the Thule Society were virtually the exclusive domain of the wealthy, educated, and prominent among Bavarian society.
There was no room for the lower-middle-class elements who were hurting the most from the effects of war, revolution, and inflation.
The enemies of the Germanenorden, the Communists and Socialists, were actively recruiting among these elements, however, and poisoning them against the aristocratic leaders and promising them a heaven on earth, or a “workers’ paradise.”
The monarchists and industrialists understood the need to counter this threat, or else their population base – a given for a thousand years of royal rule over the peasant populations of Europe– would wither and die.

It suddenly becomes clear here that the GermanenOrden, the Thule, and then the NAZI Party was “never” about the little guy…, or about the workers in Germany…, or about “the people”!
The Nazi Party was a well orchestrated CON…, put in place by the ELITE (who were only pretending to take on the mantel of the lowly worker) so they could combat what they felt was a brewing revolt against their long held ruler-ship over the masses!

The arcane occult theories and snarled academic prose that characterized the meetings and publications of the Germanenorden, the Thule, the List Society, and the Order of New Templars was not likely to be easily understood – or warmly embraced – by the masses.
The Thule, it was recognized, was an elite society, attractive only to those who had done the reading; to those who could afford the initiations and the leisure time to devote to occult studies; and to those who had already abandoned their traditional Christian faith.

Thus, in order completely to unify the German population in opposition to the threat of Bolshevism and international Jewry, Sebottendorff formed a workers’ circle with a few hand-picked men, among them Anton Drexler.

This group did not meet at the fancy Four Seasons Hotel but at a tavern, and was called the German Workers’ Party, the Deutsche Arbeiterpartei or DAP, a consciously Socialist-sounding title.
It was this group that Hitler was sent to join in September, 1919,and which, five months later, became the National Socialist German Workers’ Party, the NSDAP.
Rudolf von Sebottendorff would eventually return to Germany in the 1930s with a mission to revitalize his old Order, calling upon his former colleagues and even reissuing his old magazine, ‘Runen’.

Once the NAZI Party was established and active, a party that for all of it’s claims of being a “WORKERS PARTY” was actually a front for the GERMAN ROYAL ELITE to maintain their control over the peasants of Europe – the SS was established out of the very same Germanenorden and Thule Society sources!

Heinrich Himmler joined the SS when it was still a bodyguard unit with no more than about three hundred members, and he marched with Hitler’s men during the Munich Putsch of 1923, carrying the Reichskrieg flag.
After he became the head of the SS in 1929, however, he began to reform it along lines that can only be described as ‘cultic’, while its membership rose from three hundred, to fifty-two thousand by 1933.
The very selection of the double Sig rune as its emblem had its roots in the doctrines of List and Liebenfels.

Eventually even the Geheime Staatspolizei (Secret State Police) – or Gestapo – came under his jurisdiction, making Himmler one of the most powerful men in the German Reich, and second only to Hitler himself in authority, and enjoying the fear which the black uniforms of his elite SS aroused in the populace.

Here then, is the question of questions:

Why was Himmler so exceedingly IMPORTANT to Hitler?   What did this one man have to offer…, that NO ONE ELSE COULD?

HOW CAN YOU TELL IF SOMEONE IS REALLY LYING