NOTE FROM BRADLEY:  THIS ARTICLE COULD EASILY BE CALLED A “CASE-STUDY” FOR AI CONTROLLED TRANS-HUMANISM….

Notice that all of the big players (including Jeffrey Epstein) had his hands on this kind of science!

It was applauded as an ambitious blend of fact and fiction, “Transcendence” is Hollywood’s most dystopian movie take on the implications of Artificial Intelligence. I have cited the film featuring Johnny Depp in my latest book, Confessions of an Illuminati Vol.6.66, dedicated to the dangers of Cyber Satan. The movie in question presents the tale of the wildly brilliant researcher, Dr. Will Caster (Johnny Depp), and his team as they perform a radical experiment of uploading a human mind to a computer.  Whole-brain emulation (WBE), mind upload or brain upload that is sometimes called “mind copying”or “mind transfer” is the upcoming process of scanning the mental state (including long-term memory and “self”) of a particular brain substrate and copying it to a computer.

Whole-brain emulation as depicted in “Transcendence” appears possible in principle, as a character from the movie’s first trailer explains that the mind is, “a pattern of electrical signals,” nothing more. That might be controversial among the general public, but it is the near-universal consensus among cognitive scientists. And in principle, the pattern of electrical signals could be run (“emulated”) on a computer rather than in the human brain. The obsession with Cryogenics and Artificial Intelligence is linked to the late pedophile Jeffrey Epstein and some of the greatest minds of our time, but not many people know the extent of this secret project to emulate the fictional Dr. Will Caster, aka Johnny Depp in “Transcendence.”

In the movie, Dr. Caster’s journey goes from being fatally shot to uploading his own mind into a supercomputer, where he ultimately achieves the all-knowing, all-powerful state he’s only dreamed about. In his virtual form, the protagonist and his team work to create a sentient computer predicting that such a computer would create a technological singularity, or in his words “Transcendence.” To achieve this, Dr. Will Caster builds a technological utopia in a remote desert town called Brightwood, where he spearheads the development of ground-breaking technologies in medicine, energy, biology, and nanotechnology. The fictional town of Brightwood was filmed on location in New Mexico, with limited shooting in California.  Some of the facilities were, in fact, very high-tech labs with extremely expensive equipment. Imagine the instruments used were so sensitive that walking by with a cup of coffee could throw out the calibration of much of the equipment, so they even hired the facilities’ own scientists as extras to stand guard while they were filming.

Brain uploading will be familiar to fans and readers of Ray Kurzweil’s books or other futurist literature, but for the Illuminati elite immortality as a computer program is definitely going to be a thing of great importance in the future, and this nightmare scenario is becoming a reality. Transhumanism is advancing as a high-tech religion preying on people’s fear of death, people like the Satanic elite who have lost their faith in Jesus Christ and the promise of eternal life.  MIT Technology Review has reported that he’s pretty sure minds will be digitized in our lifetime. Some of the most serious scientists of today assume the brain will be uploaded to the cloud sooner rather than later.

The brain storage business is not new. In Arizona, the Alcor Life Extension Foundation holds more than 150 bodies and heads in liquid nitrogen, including those of baseball great Ted Williams. But there’s a dispute over whether such cryonic techniques damage the brain, perhaps beyond repair and even Jeffrey Epstein seemed very interested in a feasible alternative.

A company named 21st Century Medicine developed a different method, which combines embalming with cryonics. It proved effective at preserving an entire brain to the nanometer level, including the connectome—the web of synapses that connect neurons.  Last year, Nectome’s cofounder, Robert McIntyre, presented his brand new technology for exquisitely preserving brains in microscopic detail using a high-tech embalming process. The MIT graduate boasted on his website: “What if we told you we could back up your mind?” However, his mind-uploading service that is “100 percent fatal”will preserve your brain, but you have to be euthanized to do it. After all, Dr. Will Caster the protagonist of the film “Transcendence” was killed before being “uploaded” with his consciousness into the quantum computer.

So Hollywood predictive programming is once again not far from fiction, just as the brand new 3 billion dollar project created by Pegasus Group Holding, nicknamed “The Hive” resembles Dr. Will Caster’s fictional project near the fictional town of Brightwood, including the ostensive display of solar panels in the middle of the desert. At the inauguration ceremony that took place earlier this month, in Mohave County, Arizona, just south of Kingman, the keynote speakers featured Jeffrey Epstein’s close friend, Sarah Ferguson, Duchess of York, former wife of Royal pervert Prince Andrew, now in hiding, and self-help guru Tony Robbins, also business strategist of the Pegasus Group, who was recently accused of sexually harassing fans and staffers. This unusual ceremony featuring Sarah Ferguson, who was recently nominated official ambassador of the Pegasus Group, took place not far from where I recently held a presentation for my latest book dedicated to The Age of Cyber Satan, Artificial Intelligence, and Robotics.

The extremely well connected Jay Bloom, a friend of Barack Obama and the Clinton’s, who is the key figure and the mind behind the new solar-powered data center that officially started construction earlier this month, declared during the event: “We have selected Mohave County for its abundant sunshine, quality labor force, and the overwhelming support of Supervisor Jean Bishop and the Mohave County Board of Supervisors.” Bloom, who was also welcomed in Buckingham palace at the end of July added, “The tremendous sense of welcome and cooperation by the local government has allowed us to accelerate the launch of our project which will be operational by the end of 2019.” 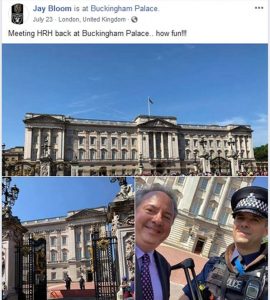 It seems pretty clear that Bloom is really representing the interests of the British Royal family, and not the United States, in this project that covers an extensive 717 acres just south of Kingman, on Interstate 40, and is patrolled and protected 24/7 by what appear to be paramilitary forces, not the usual local security contractors. In the film, “Transcendence” the FBI eventually attack the fictional “Hive” of Dr. Will Caster with artillery, destroying much of its power supply after they discover the danger of this project and its true aim. Let’s see what happens in real life once the people of Arizona realize that despite what they claim, the real mission of the “World’s Largest Solar Data Center” will consume almost all of the energy produced by their massive display of solar panels to allegedly keep the brain uploads of the elite running for the next 1000 years.

THERE IS A “FATHER” TO US ALL