CALLING A SPADE, A SPADE! THIS IS WHAT “PARENTS” IN AMERICA HAVE DONE BY TACIT CONSENT

This article, (if true) is basically a “visual” demonstration of what happens WHEN ADULTS DO NOTHING!  Mark Passio is so “right” when he talks about NEW AGE BULLSHIT!

Personally, I feel so sorry for the children…, but hey…, I’m not their parent!  I’m just an observer.  One thing that I do know AS A FACT is this…, YOU REAP WHAT YOU SOW!

If you are one of the (so-called) adults who have allowed this mess to be created…, YOU will be re-born into the middle of the MESS…, over and over…, UNTIL YOU CLEAN IT UP!

See this story below! (Don’t you DARE tell me that as a “parent” there is nothing you can do!)   I would cry…, but why?  No one in America “cares” anymore!

Education in a Police State: Schools Across the US Firing Guidance Counselors — Opt for Cops Instead 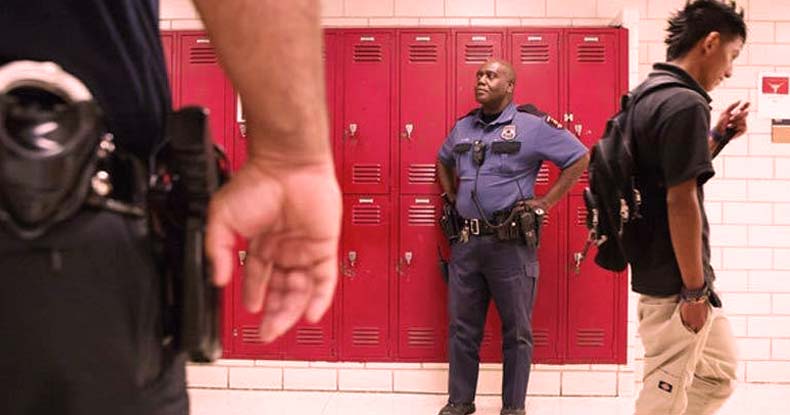 This week, the United States Department of Education (DOE) released a collection of survey data from all 95,000 public schools in America. According to the DOE, the 2013-14 Civil Rights Data Collection (CRDC) is a survey of all public schools and school districts in the United States. The CRDC measures student access to courses, programs, instructional and other staff, and resources — as well as school climate factors, such as student discipline and bullying and harassment — that impact education equity and opportunity for students.

The trove of data highlights a frightening state of affairs in which public schools now find themselves.

One of the trends shown in the data is the removal of guidance counselors. According to a report in the Washington Post, high school counselors often have tough jobs. They keep track of their students’ progress toward graduation. They help students apply to college and navigate the financial aid process. They also help kids navigate their lives outside of school, which can be made complex by poverty, violence and family trouble. And because counselors often are one of the first positions to be cut when budgets get tight, there are almost never enough to go around. The national average is close to 500 students per school counselor; many students have no counselor at all.

While the data shows that students have declining access to a kind and caring role model to guide them through their high school careers, the number of students who have access to a police officer is growing.

A whopping 1.6 million (k – 12th grade) students attended a school that employs a law enforcement officer — but has no counselor.

According to the CRDC report, which counted cops in schools for the very first time, 24 percent of elementary schools and 42 percent of high schools have armed police officers. In schools with higher concentrations of minorities that number skyrockets.

It seems that schools in America are starting to more closely resemble prisons than learning facilities. Think about it — children are locked in behind steel doors all day long as armed agents of the State patrol the grounds. A few minutes out of the day, the students are given a little yard time — and again, they are kept under the watch of armed state agents.

Video after video shows the horrific nature of such a practice as children are seen being maced, beaten, and tasered for normal childhood behaviors.

The mere act of being a child is now criminalized.

As the Free Thought Project previously reported, according to statistics released by the U.S. Department of Education and published by NBC News, in the 2011-2012 school year, teachers called the cops on students a total of 31,961 times in the state of California alone, leading to 6,341 arrests.
With 175 8-hour-long school days, that means that every 2.6 seconds a cop is called!

At one California school district, in particular, East Side Union High School District in San Jose, police were called on students 1,745 times during the 2011-2012 school year. This one school called the police on students more than ten times a day!

Just last month, we reported on the video showing a San Antonio Independent School District police officer body slam a 12-year-old girl. In February, the Free Thought Project brought you the story of the Baltimore School cop who was seen beating a student who had done nothing wrong.

In fact, recent videos have revealed a myriad of school cops attacking unarmed students. In December, Officer Rigo Valles was cleared of any wrongdoing after grabbing a student by the neck and slamming him to the floor. In October, Richland County Deputy Ben Fields was fired after students recorded him flipping over a girl’s desk and dragging her across the floor. Oklahoma City Master Sgt. Thomas Jaha was charged with assault and battery in October as well, after repeatedly punching a student in the face for not having a hall pass.

And these are the ones the public knows about — How many more incidents, just like this one, go unreported and unpunished?

Instead of attempting to solve a problem with logic and reason, schools are now taking the easy road and turning to the barrel of a gun to force compliance. This is not only dangerous and lazy, but it’s entirely unnecessary.

A study of more than 185,000 private and public school users from 2010 to 2014 revealed that violence is largely a problem in the public school sector. Private schools, unlike public schools, have an incentive to create a safe and caring environment for their students, so they take a far more proactive approach to prevent bullying — and it works.

Without using police force, private schools are able to reduce bullying and violence to levels far below that of public schools. Imagine that.

What this data illustrates is the societal dependence on the State to solve matters that should be handled without government. Being dependent upon the state to solve one’s problems is a de facto dependency upon violence.

The State represents violence in a concentrated and organized form. The individual has a soul, but as the State is a soulless machine, it can never be weaned from violence to which it owes its very existence. – Mohandas Karamchand Gandhi

If you truly want a glimpse into the horrid effects of the police state on all school children, take a scroll through our archives, at this link.

Until people wake up to the reality of relying on a system of violence to maintain “order,” we can expect this problem to get worse.

[P.S.  –  I’ve got “news” for you!  NO ONE…, is going to “Ascend” out of this mess…, until “those who made it” clean it up!   If you are one of the beings who (through cowardliness and fear)  did nothing…, and simply allowed this VIRUS to spread…, then you will re-incarnate right back into the middle of a POLICE STATE (over and over again) until your actions…, and by that I mean TAKING ACTION…, say to the Universe that you do not want a POLICE STATE any longer!  This is how the perfectly “BALANCED” Universe does things!  It looks at what you “DO” not what you “SAY” – Bradley]

RANDY MAUGANS – SHANE BALES (THE RUINER) on OFF PLANET RADIO