CAN YOU FINALLY “ADMIT”

For some time, I’ve been looking for an “image” or a “picture” that encapsulates the entire personality of Barack Hussein Obama almost perfectly!   Until now, I had not found it…, but today (I’m happy to say) that the very “image” that best encapsulates the mind, the persona, and the idealism of Barack Obama is the one that you now find below! 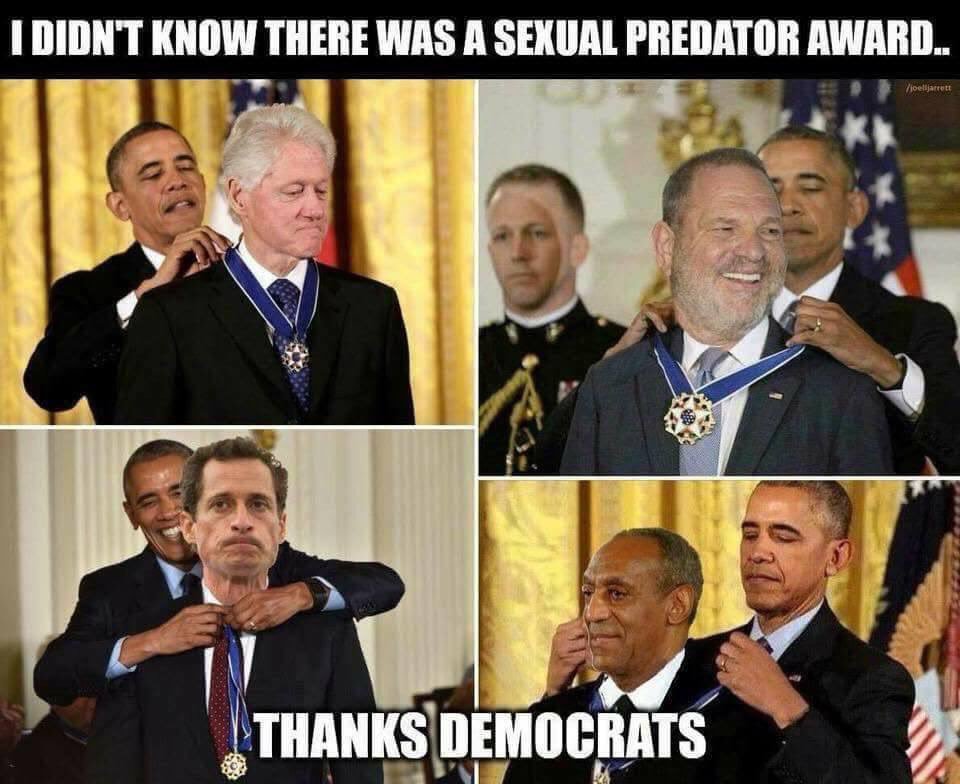 If nothing else says VOLUMES (cymbals) about what Barack Obama sees as pure, wholesome, and good…, it is the FREEWILL CHOICES he made during his own Presidency as to whom to give honors to, and thus who he gave “medals” to.

What we see happening above was NOT about “running a country”…, and it was certainly NOT about “life and death” decisions that had to be made in the line of being a President.  It had NOTHING to do with National Security issues or protecting the people of America!

Instead, it was purely about who HE, (as the President of the United States) thought was “inspiring” and thus chose to give “honors” to…, plain and simple.

In the top left corner…, he is seen giving Bill Clinton the PRESIDENTIAL MEDAL OF FREEDOM.

The Presidential Medal of Freedom is currently the supreme civilian decoration in precedence in the United States, meaning that it is the HIGHEST honor a President can give to a civilian.

In the top left corner, he is seen giving this Medal to Bill Clinton!

These are the sexual-assault allegations against Bill Clinton.

The three women – Juanita Broaddrick, Kathleen Willey and Leslie Millwee – recounted their accusations against Clinton during a press conference at the National Press Club on Wednesday.

“I was 35 years old when Bill Clinton, the Arkansas attorney general, raped me,” former nursing home administrator Broaddrick said. “And Hillary Clinton tried to silence me. I’m now 74. And it never goes away.”

Next, in the top right corner he is seen giving the SAME MEDAL OF HONOR to Harvey Weinstein!

Harvey Weinstein scandal: Who has accused him of what?

Salma Hayek, Rose McGowan and Gwyneth Paltrow are among dozens of women who have come forward with allegations ranging from rape to sexual harassment by movie mogul Harvey Weinstein.

He is currently facing five charges relating to two women in New York.

Next, in the bottom left corner Obama is seen giving this SAME MEDAL OF HONOR to Anthony Weiner!

Weiner was released after serving 18 months of his 21-month sentence for sending explicit text messages and photos to a 15-year-old girl in North Carolina.

Finally, he is giving the SAME MEDAL OF HONOR to Bill Cosby!

Look, are you finally starting to see a pattern here?   Who is it that Barack Obama found “worthy” of honors and accolades?

This had nothing to do with his Presidency, but rather who he found to be VALUABLE TO AMERICA!

Now…, for those reading…, my question is this.   Many times I have blasted the New Age Community for telling us all for eight straight years that Barack Hussein Obama was a good man…, a “great” man…, and a very HIGH SOUL!

Someone who was here to literally “Save the World”!

None of these many, (literally countless) men and women who were blogging, running websites, channeling, etc…, have ever YET EVEN ONE TIME…, admitted that they were wrong about him.

What I am wondering here is that after looking at this single image above…, CAN YOU NOW ADMIT…, that by seeing Barack Obama giving Medals of Honor to four known sexual predators – that tells us a lot about his character and who he really is?

Maybe he wasn’t here to SAVE THE WORLD!