DONALD TRUMP (MOST LIKELY) IS A FREEMASON! BUT IS HE GOING TO “SAVE” THE WORLD OR HELP “DESTROY” IT?

This particular article is somewhat in line with the last posts that I have been making concerning MYSTERY BABYLON!  A major “source” for this article can be found at this link:

Much of what this source article claims, only lends more credibility to what I’ve already been posting in the last several days!  In fact…, it fit’s just like a glove!

I will be using much of this article from the link above, and then doing my own commentary on it!  It is Dated:  February 28, 2016

An astounding, and frankly terrifying, nearly 500 page report prepared for the Security Council (SC) by the Main Intelligence Directorate (GRU), Foreign Intelligence Service (SVR) and Federal Security Service (FSB) is warning today that the United States can now be classified as undergoing a coup d’état where Freemasonic forces (for the first time in 188 years) led by American billionaire Donald Trump, and aided by secretive elements within both the Sicilian and American mafia, are presently engaged in a “soon to be deadly” all-out battle against the US Federal Reserve System supported “shadow government” currently ruling that nation, and who on its side is being aided by the Central Intelligence Agency (CIA) and the La Santa Sede (Vatican/Holy See).

Remembering that Sorcha Faal can be half truth and half lies…, this is going to be a sticky piece to wade through.  However…, if we can take Steve Pieczenik seriously…, the election of Donald Trump as President was a “counter coup” against the Clinton/Bush Crime Cabal, and thus (if what this article that I’m quoting says is true) it was also against the “Shadow Government” and the Federal Reserve Banks!

See this other article here for more background on Steve Pieczenik:

According to this report, in the aftermath of the 2008 global financial collapse caused by the outright systemic corruption emanating from the US Federal Reserve System that infected the entire Western world’s banking system for the benefit of the American “shadow government”, a powerful American-British Freemason cabal arose, headed by Donald Trump, to restore “sanity” into this system in order to, in essence, “save the world from itself”.

Having begun large land purchases in Scotland, this report continues, Donald Trump, in 2010, gathered around him the most powerful Freemasonic force ever seen in modern times in a bid to first save the United Kingdom’s banking system, and, as he envisioned Scotland would soon break away and become an independent nation, the entire world’s economy could then be saved from the Freemason’s new economically impenetrable Scottish stronghold.

In June 2010, this report says, Donald Trump and his Freemason cabal secretly put forth their historic plan to the City of London Corporation—who in turn appointed as their emissary to the Freemasons House of Lords member Baron James of Blackheath.

To understand the full implications of the Freemasons negotiating with the City of London Corporation, this report explains, one must know that the Freemason leadership only communicates with persons having an international security rating possessed by only 6 people, and that the value of their gold bullion holdings is estimated to be worth more than all the gold in the world that has ever been mined.

In his seeing that the US Federal Reserve’s “stranglehold” upon the City of London Corporation was impossible to break, this report continues, Baron James, in November 2010, took to the floor of the House of Lords publically telling his peers of the historic offer being made by the Freemasons (he self called Foundation X) to save Britain first, and then the world—but which failed to sway them leaving this critical historic event virtually unreported; except, or course, our 7 November 2010 report Secretive Knights Templar Make Astounding Bid To Save World.

Now here is where it gets sticky!

So far…, it says here, that there are a bunch of current day “FREEMASONS” running around who actually want to SAVE THE WORLD!  But later, in this very same article…, you will see some quotes given by Albert Pike (where have we seen him before?)…, who is a 33rd Degree Level Freemason…, who was already talking about having 3 world wars…, in the year 1871!!

(Don’t you just wonder how he got his information??)

Now here is where it gets interesting!   The article claims that there are TWO factions that are exceedingly wealthy in the world, and both are ruthless!  One is the Freemasons…, and the other is the Secret Shadow Government, aided by the CIA and the Federal Reserve!  If Steve Pieczenik can be believed…, then Hillary Clinton was serving the Federal Reserve/CIA/Shadow Government faction!

Let’s look at more of this article:

And since its creation by the Freemason leader Mazzini, this report continues, the Sicilian Mafia (and its American extension) has operated in “deep secrecy” protecting the global interests of the Freemasons against the equally as ruthless and criminal US Federal Reserve System and its main protector, the CIA—with the mafia making billions from the global drug trade, and the CIA making billions too.

To the ultimate purpose of the Freemason’s creating this global mafia structure to protect itself, the FSB in this report details, centers around the 15 August 1871 letter written from America’s highest ranking Freemason, Albert Pike, to Mazzini warning of the apocalyptic fate the world was facing. Known now as the “Three World War” letter, Pike warned Mazzini about what was being planned against humanity by describing the conflicts to come:

“The First World War must be brought about in order to permit the Illuminati to overthrow the power of the Czars in Russia and of making that country a fortress of atheistic Communism. The divergences caused by the “agentur” (agents) of the Illuminati between the British and Germanic Empires will be used to foment this war. At the end of the war, Communism will be built and used in order to destroy the other governments and in order to weaken the religions.

The Second World War must be fomented by taking advantage of the differences between the Fascists and the political Zionists. This war must be brought about so that Nazism is destroyed and that the political Zionism be strong enough to institute a sovereign state of Israel in Palestine. During the Second World War, International Communism must become strong enough in order to balance Christendom, which would be then restrained and held in check until the time when we would need it for the final social cataclysm.”

The Third World War must be fomented by taking advantage of the differences caused by the “agentur” of the “Illuminati” between the political Zionists and the leaders of Islamic World. The war must be conducted in such a way that Islam and political Zionism mutually destroy each other. Meanwhile the other nations, once more divided on this issue will be constrained to fight to the point of complete physical, moral, spiritual and economical exhaustion…

We shall unleash the Nihilists and the atheists, and we shall provoke a formidable social cataclysm which in all its horror will show clearly to the nations the effect of absolute atheism, origin of savagery and of the most bloody turmoil.

Then everywhere, the citizens, obliged to defend themselves against the world minority of revolutionaries, will exterminate those destroyers of civilization, and the multitude, disillusioned with Christianity, whose deistic spirits will from that moment be without compass or direction, anxious for an ideal, but without knowing where to render its adoration, will receive the true light through the universal manifestation of the pure doctrine of Lucifer, brought finally out in the public view.

This manifestation will result from the general reactionary movement which will follow the destruction of Christianity and atheism, both conquered and exterminated at the same time.”

Here he is again, your unapologetic Luciferian…, Albert Pike: 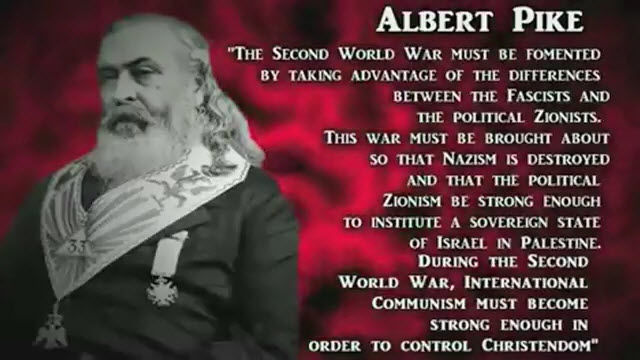 Though this “Three World Letter” letter from American Freemason leader Albert Pike to Italian Freemason leader, and mafia founder, Guiseppi Mazzini has been called a hoax on the grounds that in 1871, when it was written, the words “Zionism” and “Fascist” weren’t known, an intriguing FSB addendum to this report notes that the Freemasons have long been known for their “predictive warnings” of future events and the dissemination of them to the public, such as:

So it would appear…, that this “Coup d’tat” was actually predicted back in February of this year.  And that Donald Trump had some very powerful friend helping him get into the White House!

However…, if he really is a Freemason…, then he does have some powerful allies.  I find it interesting that the Freemasons however…, find themselves on the “other side” of a battle with the Secret Shadow Government, the CIA, and the Federal Reserve!

I’m wondering if  “SOME” of the Luciferians out there… (it seems as if all high level Freemasons are in fact Luciferians)…, don’t want to kill 90 percent of the population and actually want to save the planet??

Or, could it be as simple as a “fight” over “which” group of Luciferians gets to PUSH THE BUTTON that destroys Earth…, thereby gaining and reaping the “honor” of having done so from Lucifer??

The letter of Albert Pike seems pretty clear the aim of the Freemasons is to practically destroy humanity so that they can roll out the “true” Luciferian Doctrine to the masses!

So far today.., (and things are changing with him day by day) what has been interesting to note is that Donald Trump has decided to NOT continue the investigation into Hillary Clinton (a campaign promise that he made)…, and is thinking about placing Mitt Romney…, into his administration.

Mitt Romney is into many dark things…, but he could possibly be a fellow FREEMASON…, which is why TRUMP might use him.

After the article that I wrote yesterday…, it is my opinion that all very high level Mormons (the ones at the very top) are in fact Freemasons!

I guess in the end the article ends in a single question!!

CAN WE TRUST DONALD TRUMP?

Is he trying to save the world??  Or, is he part of the group that has been historically trying to destroy it??

A look on things in April | Save The World

[…] the other hand, this article reflects where the current presidency might lead: https://lovetruthsite.wordpress.com/2016/11/23/donald-trump-most-likely-is-a-freemason-but-is-he-goi&#8230; It didn’t look too good then, and neither it looked well […]

Reader has called my attention to a post discussing links between Trump & the Trump Tower with Freemasonic symbols. http://watchmanscry.com/?p=6550

Hi, nice asking for our opinion. Here’s mine, made an article about it: https://savetheworld1001.wordpress.com/2016/11/24/the-galaxy-is-so-big-and-carelessness-will-cost-us-the-universe/
Essentially, it’s all about whether he chooses independence of humans or the opposite.

The Galaxy is so big, and carelessness will cost us the Universe | Save The World

[…] might serve the same agenda, but it remains to be seen if that is so, written here in this article: https://lovetruthsite.wordpress.com/2016/11/23/donald-trump-most-likely-is-a-freemason-but-is-he-goi&#8230;), as it will be explained in the below articles), and this being done by convincing humans that […]

Im wondering since Trump has made it clear his allegiance to Israel and Netanyahu than what does that tell us.