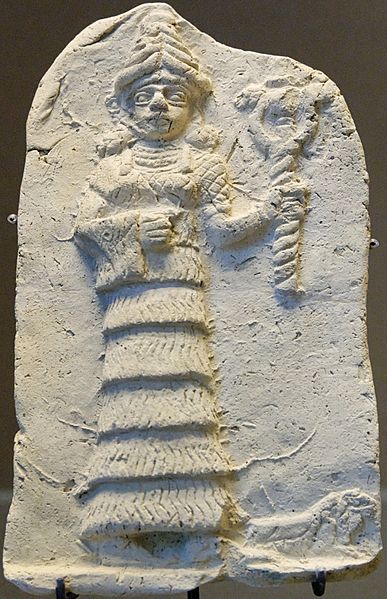 Well, here we are again, celebrating the pagan holiday of “Ishtar”!

No matter what the “Catholic Church” tells you that you are celebrating today…, you ARE in fact celebrating ISHTAR (ISTAR).

Ishtar was an important deity in Mesopotamian religion which was extant from c.3500 BCE, until its gradual decline between the 1st and 5th centuries CE with the spread of Christianity.[2]

Today is the 16th of April…, and (for those of you who don’t know, don’t care…, and can’t pay attention) the actual “day” called: Easter Sunday can be anytime from mid February at the earliest to mid April like it is this year!

It is NEVER celebrated on the same day each year meaning that it can not POSSIBLY in any way signify or celebrate the Ressurection of Jesus Christ!

If that were true (USE YOUR HEADS)…, then it would be celebrated on the SAME DAY each year.

It is the “Catholic Church” which chooses the actual Sunday each year when EASTER will be celebrated!

They do this by using “Astronomical Readings of Planetary Allignments”.

In other words…, they “watch” the skies and the “heavens” and the “planets” in order to give them the proper date (read best time MAGNETICALLY/MAGICALLY) to have this world wide celebration.

Why do “planetary alignments” matter if not used for MAGICICAL/MAGNETICAL reasons??

And no matter what religion or faith you practice in the “Christian World”…,

I don’t care if your Protestant, Methodist, Luthern, Jehovahs Witness, Mormon, or any other…, you ALL celebrate Easter Sunday on the exact day that the Catholic Church tells you to!!!!

STOP DENYING JUST HOW CONNECTED YOU ARE TO THE CATHOLIC CHURCH.

Between February 15th and April 15th there are approximately 60 possible days.  Why do each and every christian church celebrate Easter Sunday ONLY on the day that the Catholics say to celebrate it on?

And for the LIFE of me…, how do you “justify” their need to change the date every single solitary year, and vary it as much as 60 days from one side to the other?

Use your head!  (You’ve been CONNED)

There is NO SEPARATION between Christian churches at the very top because if there WAS…, then each of these other “churches” (who are not Catholic) would simply pick their OWN DAY to celebrate ISHTAR.

This is everything that the Catholic Church stands for!  It is unabashedly enmeshed in all of the above with the emphasis these days on WAR-SEX-and POWER!

Ishtar would be proud!

Ishtar was the daughter of Anu.[3]

She was particularly worshipped in the Upper Mesopotamian kingdom of Assyria (modern northern Iraq, north east Syria and south east Turkey), particularly at the cities of Nineveh, Ashur and Arbela (modern Erbil), and also in the south Mesopotamian city of Uruk.[3]

Besides the lions on her gate, her symbol is an eight-pointed star.[4]

See this link for MORE…, and as the source for one of the quotes below:

What is closer to the TRUTH, is that ISHTAR is a pagan holiday which is far more celebrated by Satanists/Illuminati/Luciferians than you can possibly realize, and has tremendous significance to both witches and warlocks…, which is why planetary allignments are so very important!

Check out this link:

There is, arguably, a persistent commonality between these two natures of Inana/Ištar: her sexuality.

The young Inana of Sumerian poetry, who says “Plough my vulva, man of my heart” Leick 1994: 91) is no less desirous than the Inana/Ištar portrayed in Gilgameš: “Let us enjoy your strength, so put your hand and touch our vulva!” (Dalley 2000: 79).

It is for this reason…, that most of the secret places you can go on the web…, and ALSO HIDDEN PLACES ON DARK WEB…, you’ll find that ISHTAR is associated with both “child sex” and “child prostitution”!

Dozens of websites can be found (do your own research) where images of naked children can be found, and there will also be undeniable references to ISHTAR on that website as well!!

Men and women who work on the SATANIC/WITCHCRAFT SIDE of things recognize the Ancient Importance that ISHTAR has to both sex and prostitution!

Which is EXACTLY why the “symbol” for “Playboy Magazine” has always been a “bunny”!!

The “bunny” is a nod and a bow to ISHTAR!

Tammuz was noted to be especially fond of rabbits, and they became sacred in the ancient religion, because Tammuz was believed to be the son of the sun-god, Baal. Tammuz, like his supposed father, became a hunter.

The day came when Tammuz was killed by a wild pig.

Queen Ishtar told the people that Tammuz was now ascended to his father, Baal, and that the two of them would be with the worshippers in the sacred candle or lamp flame as Father, Son and Spirit.

Ishtar, who was now worshipped as the “Mother of God and Queen of Heaven”, continued to build her mystery religion.

The queen told the worshippers that when Tammuz was killed by the wild pig, some of his blood fell on the stump of an evergreen tree, and the stump grew into a full new tree overnight. This made the evergreen tree sacred by the blood of Tammuz.

She also proclaimed a forty day period of time of sorrow each year prior to the anniversary of the death of Tammuz.  (LENT)

During this time, no meat was to be eaten.

Worshippers were to meditate upon the sacred mysteries of Baal and Tammuz, and to make the sign of the “T” in front of their hearts as they worshipped.

They also ate sacred cakes with the marking of a “T” or cross on the top.

Every year, on the first Sunday after the first full moon after the spring equinox, a celebration was made.

It was Ishtar´s Sunday and was celebrated with both rabbits and eggs.

Ishtar also proclaimed that because Tammuz was killed by a pig, that a pig must be eaten on that Sunday.

By now, the readers of this tract should have made the connection that paganism has infiltrated the contemporary “Christian” churches, and further study indicates that this paganism came in by way of the Roman Catholic System.

The truth is that Easter has nothing whatsoever to do with the resurrection of Jesus Christ.

Please…, once and for all…, STOP LISTENING TO AUTHORITY FIGURES WHO TELL YOU WHAT TO DO AND WHAT TO THINK!

Simply read history…, and you’ll know you are being CONNED!

WHAT COULD POSSIBLY GO “WRONG” WITH THIS ??

Ishtar, God and the great calf |

Thank you a lot for this. This came at the right time, was studying something in regards to gods.
Thank you for this and your post.

My intuition was right, posted some information regarding how breaking of eggs is not something truly Right, but something more or less sinful, and pagan.
I am curious, for how long you knew about the paganism in so called ‘Christianity’?
Today, or at least, the past couple of weeks, evidence was revealed regarding what is/ what are the so called ‘religions’, right now.

The videos from the article after this have good information and further clarification, so I’ll post a comment there, regarding what current religions actually are.

Here is the telescope called “lucifer” which is the
Catholic Church using to get the right “Planetary Allignments”.