You know…, every time I write an article that I (know) God our loving Father/Prime Creator wants me to write…, HE always BACKS ME UP the very next day.

This is the article in question (I got no comments on it by the way)…, but our Heavenly Father wanted me to call attention to it once again (apparently) and so here is the link:

WHY ASCENSION IS “NOT” IMMINENT

Now…, what the heck am I talking about?

Well, if anyone is reading the morning news out of SPAIN…, you’ll find that the government of SPAIN has gone 100 percent totally SATANIC…, and there are photos to PROVE it.

What was supposed to be a peaceful “vote” of the people of Catalonia…, as to whether or not they would get independence from Spain…, the people of that small state…, were brutally beaten by POLICE THUGS as they voted.

See this article from Zerohedge for details.

Young and old people alike were BEATEN simply for being inside a polling station and for trying to VOTE.

Let me be the first to make this perfectly clear…

ALL POLICE OF SPAIN/CATALONIA WHO TOOK PART IN YESTERDAY’S BEATINGS (AND FOLLOWED THESE HORRENDOUS ORDERS) BE AWARE THAT I AM PETITIONING PRIME CREATOR TO SEE THAT THEY ARE SEVERELY PUNISHED ON THE OTHER SIDE. (NOTICE GIVEN)

These cops/police have proven that they are NOT really human…, and just like Mark Passio tells us in countless videos…, they are DOGS!

They are the DOGS of the ELITE.

HOWEVER…, THERE IS A MUCH LARGER PICTURE HERE…

SPAIN…, is a member of the supposedly “First World Showcase European Union”.

This is the group of nations that we are being “told” every single day is the “Model” of Earth Citizenry…, and is pure Love and Tolerance!

While “we” here in America are being finger wagged (by the very same European Union) as we speak…, at how we are so INTOLERANT…, RACIST…, SEXIST…, and just plain pigs to boot!

But holy cow…, the so-called “model” of tolerance and love…, just showed us what it is truly all about…, and we here in (intolerant, racist, and sexist) America can only be so Damn Glad…, we are NOT living inside the EUROPEAN UNION!!

England…, can also be damn thankful that they voted FOR BREXIT…, and if they do not finish the job.., then they will ONLY have themselves to BLAME and soon we could be seeing these very same things in England.

Here are some images from yesterday in Catalonia where Spanish Police are lovingly “helpling” citizens see that VOTING is “wrong” and a “bad” thing to do. 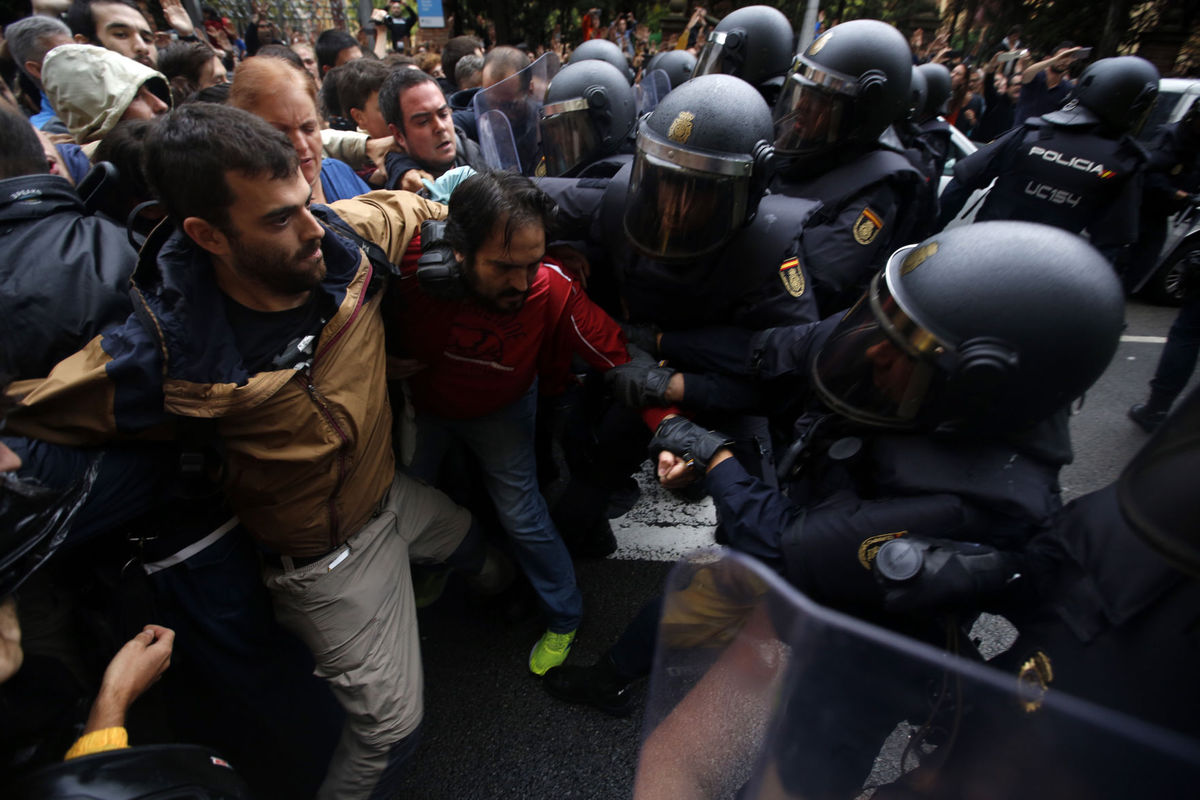 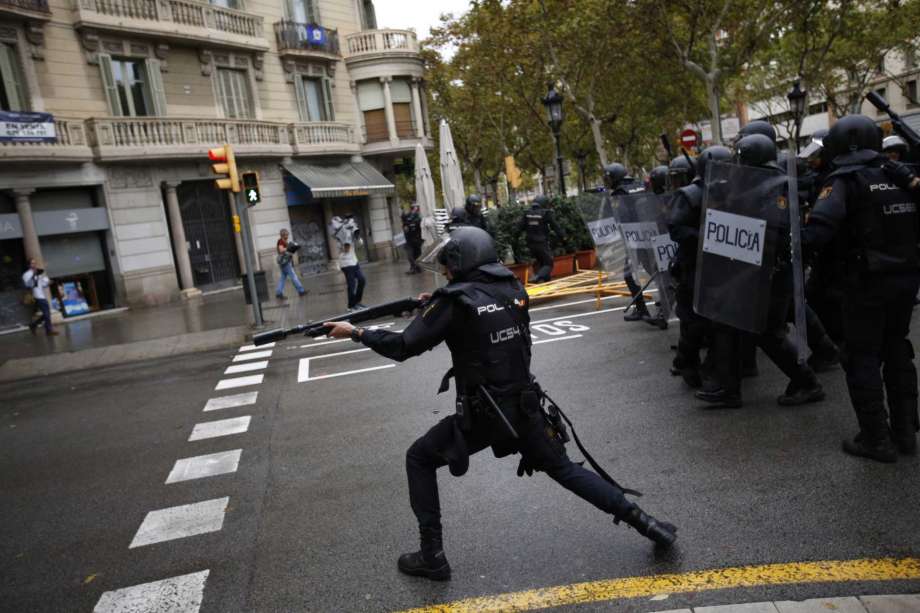 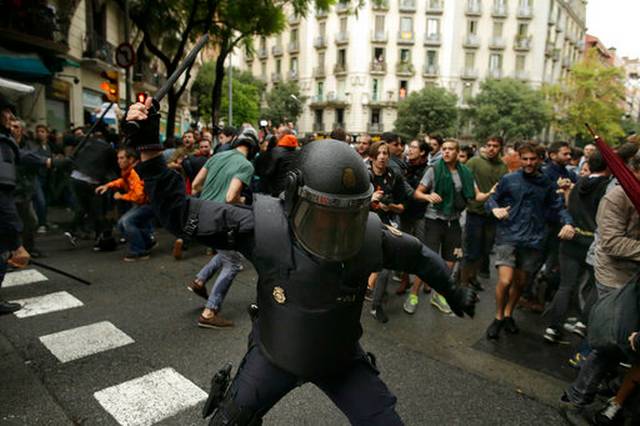 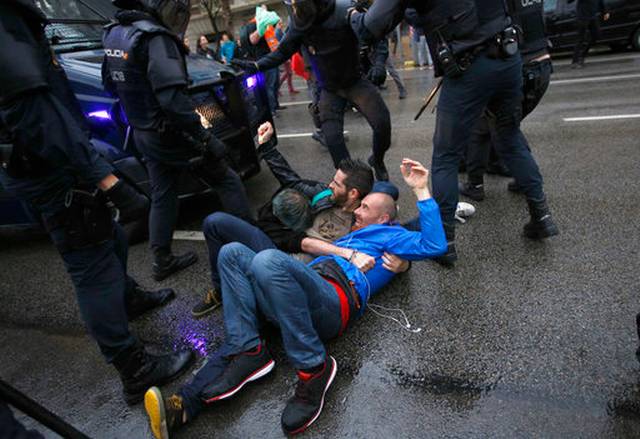 Countless “tweets” can be found on the Zerohedge article…, of people video taping while police are beating people up.

Once again…, that link is:

NOW, LET’S GET BACK TO THE ARTICLE/POST THAT I WROTE YESTERDAY…, AND NO ONE COMMENTED ON…

Here is a quote:

We are seeing the world getting darker and darker…, and more and more people are turing “cultish” or “satanic” in their daily actions and behaviours.

These are just the “signs” if you will, but there is so much more to say.

Once you are able (IF) you are able…, to take off the “rose colored” glasses that have been placed over your mind, you will see that almost every single world leader is in fact a vicious criminal.

This is not an exaggeration.

Almost ALL governments LIE to their people…, and the sheer amount of human beings that are working “in government positions” around the world is staggering. They are (in all honesty) supporting the DARK that is being done.

Run more like “criminal mobs” or gangs than hollowed bodies meant to govern…, we have over 200 some “governments” whose ONLY JOB seems to be to put down and trample all of their people and their GOD given rights under foot.

It does not get any MORE REAL than this.

Well…, if you look at the images coming out of Catalonia…, then you “might” just say I was on to something.

Can I say “I told you so”…, now…, or should I wait for a few days…, while a few thousand MORE people get beat up by their so called Government??

OH…, and by the Supremely “loving” and “tolerant”…, and “progressive” European Union…, no less….., which can ONLY shake its head and wag it’s finger at AMERICA!

Hey…, how about letting a few more million migrants into Europe…, you know…, the ones who just LOVE TO RAPE women and children! (Sweden/Germany)

That should help your problems over there in Europe!!!

And…, it is for those who have ears to hear!

THE TIME HAS COME!

Either stand with GOD.., for what is truly right and just…

(There is no in between…, the TIME HAS COME)

See the Video at this link:

WHY “ASCENSION” IS NOT IMMINENT

No matter what position your life is in………………….. , YOU CAN MAKE A DIFFERENCE in each and every Contact you have with another Human Being!!

MANY THANKS AND BLESSINGS BRADLEY !!!