HERE’S EXACTLY HOW THE “OFF PLANET ENTITIES” ARE HELPING THE US!

This article reposted from Dave Hodges site is a good example of how ridiculous the idea is that “we” are being “helped”. 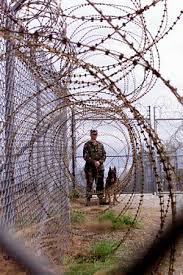 There are three type of prisons inside the United States. There is the one, that the people see. In this instance, the prison works in conjunction with legal authorities and their activities are transparent. A second type of prison system is the privatized system which has degenerated into system of slave labor which benefits Wall Street with free labor. The third of type of prison is a FEMA camp for political prisoners. The Government admits to two such facilities and they call them Communications Management Units. The latter operates under the auspices of the NDAA. They are everything that the old Soviet Gulags were made of. What is presented in this article is a brief review of the second and third type of prisons in the United States. After reading this article and watching the associated videos it can be said that any journalist who denies the existence of FEMA camps, is not worthy of the public’s consideration.

The United States Is the World’s Biggest Jailer

The United States only has about four percent of the world’s population. Yet, the U.S. presently incarcerates over one quarter (25%) of the world’s prison population. In this, theland of the free and the home of the brave, an American citizen has a six times greater chance of being incarcerated than in most other countries.  We lead the world in per-capita incarceration rates and the number is growing by leaps and bounds. Over the past 45 years, our prison population has risen by 700%. Incredibly, one in 99 American adults are behind bars in the U.S. Further, one in 31 adults are under some form ofcorrectional control (e.g. prison, jail, parole and probation populations). All too frequently, incarcerations are the result of low-level, non-violent offenses.

Given our incarceration rates, it is apparent that the number one goal of our justice system is to incarcerate as many poor people as possible who do not have the economic means to fight back. These conditions are leading to the creation of a “prison industrial complex” that is just as real and just as corrupt as the military industrial complex.

Privatizing Probation for Fun and Profit

The prison industrial complex is motivated by profit. Privatized corporations have been given extra-judicial authority in this country to jail as many people as possible. And they have found an old way to accomplish this goal. The end result is that on an increasing basis, our prison population is made up of nonviolent offenders who cannot pay their court costs. In other words, our prisons are increasingly being turned into debtors prisons.

The GEO Group is not the only profitable privatized prison group. The Corrections Corporation of America is the largest private prison operator in the United States. The CCA procured its first private prison in, ironically, 1984.

Did you know that in many states, privatized prisons are guaranteed 90%to 100% occupancy rates by the government?

According to the California Prison Focus “The private contracting of prisoners for work fosters incentives to lock people up. Prisons depend on this income. Corporate stockholders who make money off prisoners’ work lobby for longer sentences, in order to expand their workforce. The system feeds itself,” says a study by the Progressive Labor Party, which accuses the prison industry of being “an imitation of Nazi Germany with respect to forced slave labor and concentration camps.”

A Globalist Endeavor to Incarcerate As Many People As Possible

Privatized prisons are big business, very big business. The GEO Group, headquartered in Boca Raton, Fla., claimed $115 million in profits on $1.52 billion in revenue in 2013. The GEO Group is publicly traded on the New York Stock Exchange, is worth $2.3 billion, and it paid Chairman and Chief Executive George Zoley $4.62 million in total compensation in 2013.

According to public analysis from the Security and Exchange Commission (SEC), the largest holder in Corrections Corporation of America is Vanguard Group Incorporated. Vanguard is a major player in controlling several media giants. Vanguard is the third largest holder in Viacom and AOL Time Warner. Vanguard is also the third largest holder in the GEO Group. The GEO group, second only in size to the CCA with regard to privatized prisons as it controls over 100 correctional facilities in the US, UK, Australia and South Africa. In addition to CCA’s unwarranted control over the media, the number-one holder of both Viacom and Time Warner is a company called Blackrock. Blackrock is the second largest holder in CCA, and the sixth largest holder in the GEO Group in this never-ending incestuous relationship. This is why you are not hearing about these abuses in the media.  By association, the media is a partner in locking up as many prisoners as possible for slave labor purposes.

Many of Wall Street’s giants have been invited to the party and are reaping huge profits. The following is a list of the corporations that contract with CCA and GEO to produce American slave labor goods. They include Intel, Northern Telecom, TWA, Nordstrom’s Boeing, Motorola, Microsoft, AT&T, Wireless, 3Com, Revlon, Macy’s, Pierre Cardin. Texas Instrument, Dell, Compaq, Honeywell, Hewlett-Packard, Nortel, Lucent Technologies, Target, and countless more. All of these businesses are excited about the economic boom generation by prison slave labor and most actively lobby for mandatory sentencing.

Generally, prison inmates in state run penitentiaries generally receive minimum wage for their work. In Agenda 21 controlled Colorado, they only receive about $2 per hour, well under the minimum for state run prisons. However, Colorado inmates are rich compared to inmates in privately-run prisons where they can receive as little as 17 cents per hour. This is worse than Walmart slave labor in China! The highest-paying private prison run by the CCA pays 50 cents per hour for “highly skilled positions.” I am not sure how this is even legal as I remember reading something about the 13th Amendment.

The government will fully admit that they have FEMA type prisons within two Supermax prisons in the United States. It is estimated that about 70 people are being held in CMU units in two federal penitentiaries –, namely, in Terre Haute, Indiana and Marion, Illinois.

This is an NDAA program and these prisons were created to isolate and segregate certain prisoners from the general prison population, and to restrict and monitor communications between inmates and the outside world. Once assigned to the Communications Management Units (CMUs), prisoners are banned from any physical contact with friends or family, and phone calls and letters are restricted too. If they mention anything about the conditions, they will instantly have 26 years added to their sentence and no judge or jury will ever be involved. The Board of Prisons, like the FDA, the BLM and the EPA are allowed to make up their own laws as they need. Here is one reporters account of his experience in a CMU.

This is the side of the CMU that the government lets the public see. There is a hidden side that represents the worst of Stalin and Hitler.

The FEMA Prison within a Prison

There is the case of Schaeffer Cox. He was a Second Amendment proponent. He was nonviolent, but was steadfast about the right of the people to control guns. He was also speaking about the power of the purse returning to the people as well. These are two issues that a tyrannical government does not want the people to control. Subsequently, Cox’s group was infiltrated by FBI undercover agents of provocation. The FBI agents suggested killing law enforcement to make their point. Cox rejected the arguments. The FBI reported to the Alaskan CPS that Cox was abusing his children. The FBI tried to create a scenario where Cox would resist arrest and they could kill him as they did with Lavoy Finnicum in Oregon in the BLM controversy.

Cox was arrested and his trial was a kangaroo court. The judge would not allow evidence to be introduced that he was being framed. He was prosecuted for the actions of the FBI undercover agents who verbally plotted against the government, even though Cox rejected their intentions. This was all recorded and the federal judge would not allow the tapes to be entered into evidence. Cox is a political prisoner and is being held under the NDAA. He has no physical interaction with family, his time on phone is less than any federal prisoner, he banned from speaking about his conditions of confinement. If he violates these provisions, he will have another 26 years tacked on to his sentence.

Cox’s story is told here, and it starts at the nine minute mark.

It’s What They Aren’t Telling You That Is Important

First, CMU’s are FEMA camps within a prison. However, the two known facilities are only the tip of the iceberg. Any prison can create a FEMA camp prison within a prison. I have an insider source who tells me that this is being beta tested in several prisons and that the “disappearing homeless” are their prime guests and they are being used to train the staff at these covert FEMA camp sites.

I believe that this will be ultimate fate of people in the Independent Media. An FBI stooge will do what they did to Cox, They will write in on a website of a talk show host and suggest violence and the talk show host will be prosecuted for the actions of the FBI.

Meet the new prisons. They are often prisons within prisons. They practice slave labor and worse yet, they are the new FEMA camps which can be hidden in plain site. I would request that my fellow Americans make this go viral so we can raise awareness against the new American Gulag.

Like what we do? Please consider donating to The Common Sense Show–CLICK HERE

WHAT IS “PSYCHOPATHY” – Mark Passio

IS VENEZUELA THE “BETA TEST” FOR WHAT IS COMING IN THE US?