HOT OFF THE PRESS AT Q-RESEARCH 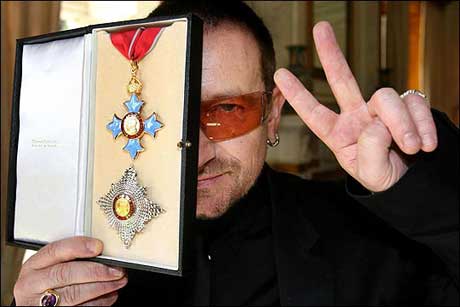 This looks like BONO to me!  Is he giving us the ILLUMINATI – one eye covered up SYMBOL??

What is that medal he’s holding and so proud of??

Is he part of the NEW WORLD ORDER “FAN CLUB” ??

As we all have heard symbolism will be their downfall. What symbolism and whose downfall. That is going to be exposed.

“Listen to everyone, read everything; believe absolutely nothing unless you can prove it in your own right!”

A Black-Tie Ball Fit for a Knight 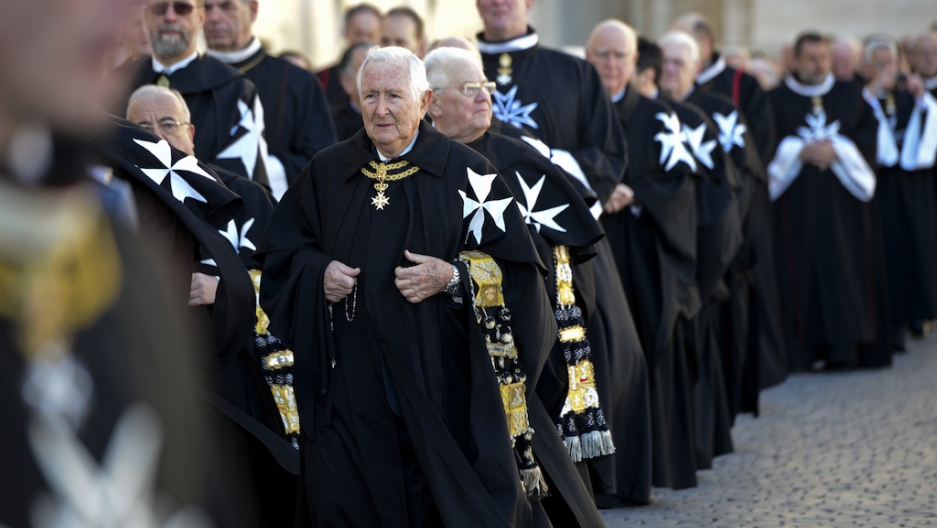 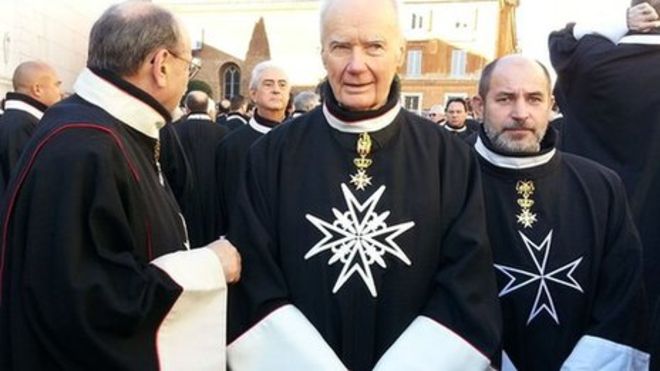 The Order of Malta is more than nine centuries old, but that doesn’t mean it can’t try something new. Last Saturday at the Metropolitan Club, the organization, whose mission is to serve “the poor and the sick,” held its first White Cross Ball in New York, where it has some 150 knights and dames.
A few things to know about the order (whose full name is the Sovereign Military Hospitaller Order of St. John of Jerusalem of Rhodes and of Malta): It is a sovereign entity with diplomatic relations in 105 countries and permanent observer status at the United Nations. Its insignia is the eight-point Maltese cross, which hung prominently over the raffle prize table.
And it has not occupied the Mediterranean island of Malta since 1798, thanks to Napoleon.
“To me, it epitomizes the real meaning of chivalry,” said Michael Espiritu, 36, a neonatal doctor originally from Woodbridge, N.J., who wore tortoiseshell glasses and a small medal on his lapel.
(The dress code called for “black tie with miniatures and decorations.”)
Dr. Espiritu became a knight last fall, after years of volunteering. “For a long time you had to show nobility in all eight of your great-grandparents to become a knight,” he said. “And the surest way not to become a knight is to ask to become a knight.”
He was soon joined by Niccolò Falez, the 29-year-old event chairman, who is also a knight. “For me, it’s a family thing,” said Mr. Falez, who was born in Rome and works for his family’s hotel-management business. “My father is a knight in the Order of Malta.
My grandfather was a knight in the Order of Malta.” He had two medals on his tux, he said, because “I’m also a knight of the Holy Sepulchre.”
With premium tickets going for up to $2,000, the ball had sold out its 350 seats. A string duo played for the crowd, which included not just knights but lawyers, real estate agents, former debutantes, restaurateurs and a pair of robed priests from the Canons Regular of Saint Augustine, who had come in from Long Island.
Many were unaware of the big anniversary being celebrated: 450 years since the Great Siege of Malta, in which the knights fended off an Ottoman invasion.
“The Order of Malta held strong against them, and by doing so saved Europe,” said a 26-year-old Scotsman named William Murray, another party organizer.
Somewhat sheepishly, he revealed that he is the Honourable William Murray, Master of Stormont.
But he is not a knight (yet).
“I was the aide-de-camp to the Grand Master in Rome,” he said. “You know ‘The Devil Wears Prada’? More like ‘God Wears Prada.’ I’m Anne Hathaway.”
As for the party, he said, “I’m the idiot who came up with the idea,” along with Mr. Falez. The concept, he added, was to stoke awareness of the order in New York (the ball has a well-established equivalent in London) and to raise funds for humanitarian projects, including a summer camp for disabled youth and disaster relief for earthquake victims in Nepal and Chile.
The pair enlisted Dr. Espiritu as a co-chairman and their friend Laura Webb as the ball’s creative director. “I want this to be one of the landmark social fund-raising events in New York,” Mr. Murray said. “It’s going to happen. The mystique of the order is on our side.”
His girlfriend, Kate Borowitz, led him into the dining room, where guests were served lobster-claw starters and filet mignon as they sat beneath a ceiling of painted cherubs. Dr. Espiritu was seated between two models, Tottie Greer and Solveig Hansen.
“We were both born premature,” said Ms. Hansen, who is Danish, referring to herself and Ms. Greer. “Mike is a neonatal doctor, and one of the missions is a neonatal hospital in Bethlehem. And so we got to talking. We actually met at a Knicks game.”
Mr. Murray got up to announce the raffle prizes, including a bottle of Macallan Scotch and a pair of custom Lareymondie loafers. Then he invited up an honorary host, John T. Dunlap, who sits on the order’s Sovereign Council in Rome.
“I’m a professed knight,” Mr. Dunlap, a lawyer, explained later. “I took vows of poverty, chastity and obedience.” He wore a kilt (he’s Scottish-Canadian) and 11 miniatures on his lapel. “Every time a head of state comes, I get another medal.”
After dinner, there was dancing, a photo booth where guests could pose with a coat of arms, and a beautification station from the company beGlammed, where Jasmine Lobe, the sex columnist for The New York Observer, got her hair primped. She said she met Dr. Espiritu at a party at the Whitney Museum.
“He never told me he was a knight,” she said.
“Does he not list it on Facebook?” asked her plus-one, a Los Angeles astrologer named Rose Theodora.
“I don’t know him that well,” Ms. Lobe said. She added, “Actually, I just wrote a column about finding your knight in shining armor. A lot of women have fantasies about Prince Charming coming into their lives, and I think that as a woman you start to realize you’re your own knight in shining armor.”
Did she realize she was surrounded by actual, honest-to-goodness knights?
“Scratch what I said!” she cried. “Excuse me, I’m going to go up to the top of a tower and wait.”
https://www.nytimes.com/2015/09/27/fashion/order-of-malta-white-cross-ball.html

The Order of Malta has certain connections to CARDINAL BURKE! 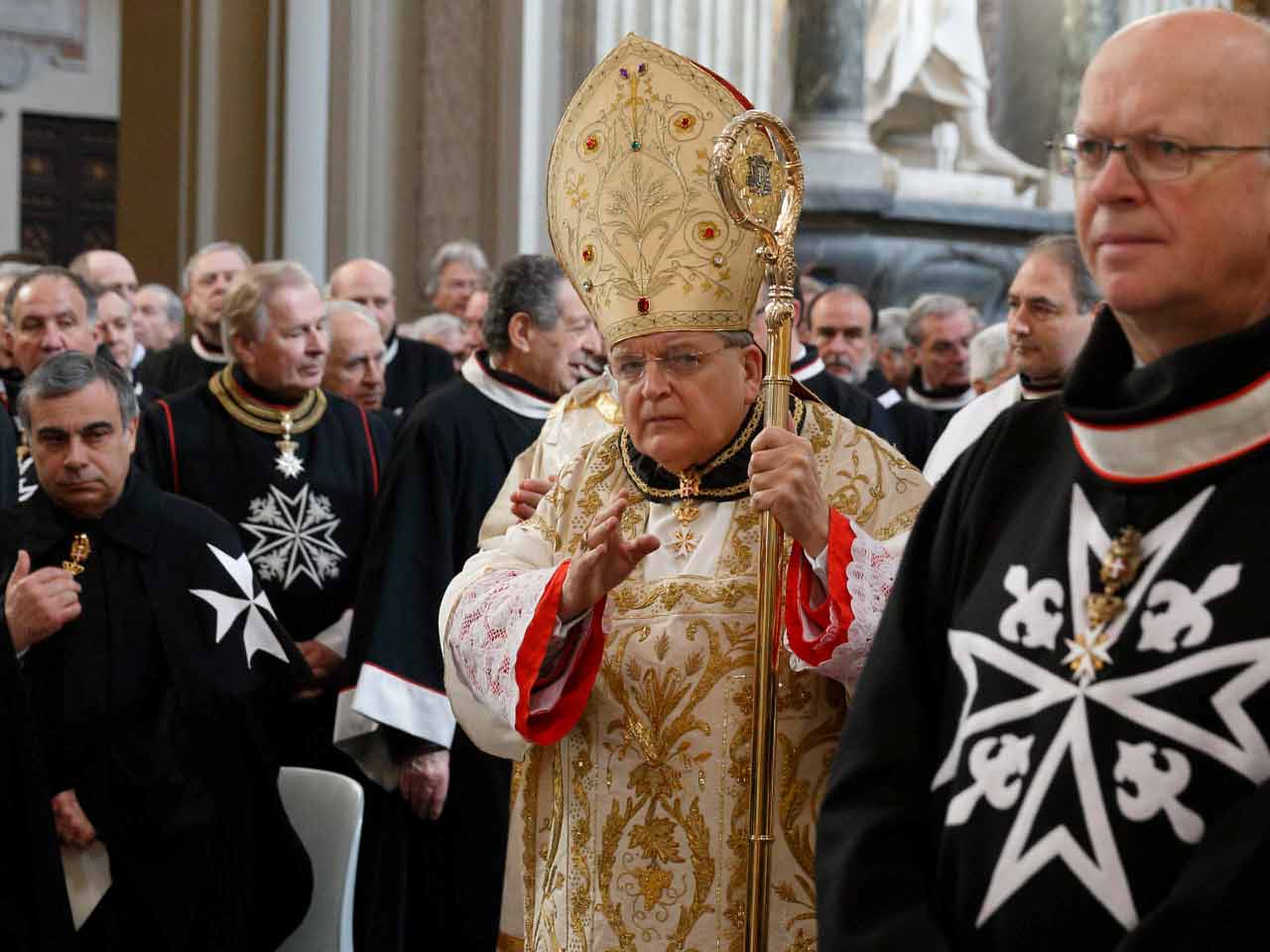 Also…, from this Article written by Leo Zagami…, it is clear that there is still a lot of subterfuge going on inside the CATHOLIC CHURCH!

One again the Vatican is linked to another scandal.

This time an Italian dermatology hospital and two senior cardinals are at the center of a financial scandal involving the Vatican bank, the U.S.-based Papal Foundation, and millions of euros from misallocated government grants where the Catholic faithful seem to be used as a credit card by these criminals.

In this case, the events concern the financial collapse of a hospital in Rome called the Istituto Dermopatico dell’Immacolata (IDI), a very good hospital that I have personally used in the past, unfortunately linked to the wrong people.

According to media reports and new sources, Cardinal Angelo Becciu and Cardinal Giuseppe Versaldi have been key players in a complicated series of transactions that financed the Vatican Secretariat of State’s 2015 acquisition of the hospital, which collapsed under large-scale acts of theft and money-laundering which led to the imprisonment of its president.

Multiple sources in the United States and in Rome have confirmed to Catholic News Agency that the then-Archbishop Becciu was responsible for organizing a concerted effort by other Vatican officials and American cardinals including the former Cardinal Theodore McCarrick to pressure the board of the U.S.-based Papal Foundation to approve a grant of $25 million in 2017.

Although American donors were told the money was to ease a temporary cash shortage at the IDI hospital, sources in the Administration for the Patrimony of the Apostolic See (APSA) and the Papal Foundation stated that the true purpose of the loan was to help remove a 50 million euro debt from APSA’s books, so it was basically another scam at the expense of the Catholic flock.

The debt was in the end the result of an APSA loan to a non-profit partnership between the Vatican’s Secretariat of State and an Italian religious order, which borrowed the money to purchase the institute in question.

The hospital, in bankruptcy at the time it was purchased, was then unable to repay the debt, and because the loan violated European banking agreements, it called in APSA under strict regulatory oversight. Becciu, who was the second-ranking figure at the Secretariat of State, reportedly stepped in to stop the bad loan from putting APSA and the hospital at risk of a more serious financial scandal.

According to my sources, the request came directly from Pope Francis and not Becciu who said he was not involved in securing the Papal Foundation grant.

However, one senior figure at APSA conveniently told Catholic News Agency recently that Cardinal Becciu was the person in charge to remove Pope Francis and not involve him in this new financial scandal hitting the Vatican.

Sources close to the efforts to fund the IDI purchase also told the Catholic News Agencythat the Italian government officials declined to pursue the matter further because of the involvement of high-ranking Vatican officials and because the funds were still going to be used for a hospital proving once again the crookery of the Italian government.

Last year, Pope Francis even made Becciu a cardinal and appointed him to lead the important Congregation for the Causes of the Saints, probably to shut him up. In recent weeks his time at the Secretariat of State has come under increasing scrutiny after the Vatican raid,

following reports of his use of a Luxembourg-based investment fund to direct more than $200 million into a property development scheme in London, and he is believed to be at the center of a still-ongoing internal Vatican financial investigation that proves that the Vatican is overall a criminal organization not a religious one anymore and as USA Today pointed out last year, “Catholics, keep your wallets closed until the Church reforms from the Vatican on down.”

Q- ANON POSTING ONCE AGAIN – 8KUN.NET – BUT CURRENTLY UNDER ATTACK