HOW DEEP DOES THE RABBIT HOLE GO? YOU HAVEN’T SEEN ANYTHING YET!! (Part Eight)

Reading Helena Blavatsky’s Book: The Secret Doctrine, is like trying to follow AND catch a million flies…, all at the same time!  She is all over the place, and brings into her discussion almost every single Ancient Religion that ever existed!

What is most noticeable to me however is this:

Nothing that she writes in this book has any resemblance in the least to the many FAKE RELIGIONS the she and her Freemasonic buddies started and gave to the masses, or the public, at a time when the TRUTH was sorely needed!

In fact…, just like fellow Freemason Albert Pike says over and over again in his writings from Morals and Dogma…, her teachings are SECRET, and are not for the profane!  It is of interest to me then…, while coming upon these writings and teachings of hers well over 100 years after she gave them…, that I can read what she REALLY BELIEVED…., while at the same time see all of the horror and the despicable fallout of the many FAKE teachings that were handed out to what both she and Albert Pike called:  “the less deserving”.

War, famine, disease, hunger, greed, and all of these other things, were not “corrected” by saving what she thought was TRUE KNOWLEDGE for only the “adepts” while at the same time, very actively handing out false doctrines to the lowly masses.

For those people who do not think that SHE, and all of her Freemasonic buddies are responsible for LYING to the masses…, I have just given at least a dozen examples in the previous installments of this series (See Parts 0 to 6) of Religions or Societies that were in fact “started” by the Freemasons, in order to do nothing BUT hand out false doctrines and teachings to the masses.

It is an “agenda” that they are still following apologetically to this very day!

This is why, regardless of how “knowledgeable” she claims to be, I can’t take her seriously!!

LYING IS NEVER A CORRECT APPLICATION OF WISDOM

For instance, she claims that Satan was the Angelic, but rebellious son of a demi-god (creator god) named: Jehovah-Il-da-Boath!

This sounds a lot like the Yalda-Boath “monster” or Archon that “Cobra” talks about in his many updates…, which in sucking the very life out of our solar system.

She also calls Satan a “Fire Angel” and likens him to other Hindu Angels!

“Rudras”, “Fire-Devas”, “Kumaras”, and then even says he resembles the “Virgin Angels” of which she emphatically states belong both Arch Angel Micheal and Arch Angel Gabriel…, all who are also VERY rebellious spirits, or Divine Rebels! (At least according to her).

So in her “theology” (which she calls: Theosophy) Satan is very similar to Arch Angel Micheal because they are Fire Angels and Divine Rebels!

All of these “entities” (especially the Hindu ones) according to her descriptions are pure FLAME ENTITIES…, and therefore remind me of the so-called “god” that Jay Parker’s mother (who claimed to be a witch) “summoned” into the physical when he was only a young boy so that he could “see” who “GOD” was.

This is all very “ASTRAL” , and gets into what I would call the POWER TRIP of the spiritual journey!

I encourage anyone who has the time to read well over 1,000 pages, to take a spin with THE SECRET DOCTRINE, just to see what you can make of it!   But be warned!  It reads like something a PH.D. would write IF that person were totally “enamored” with their own intelligence!

The only real TRUTH that I can tell you is that every part of the ritual and dogma that is handed out to the masses, has very hidden “meanings”…, which those who are the “profane” are NOT supposed to understand!

So…, The Catholic Church (just like all of the other Religions that I’ve previously named) is very much a FAKE RELIGION, with endless  hidden symbols and meanings. 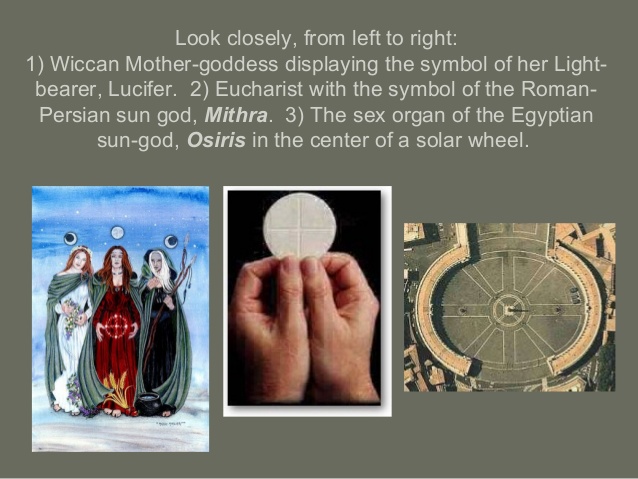 Here is a closer look at what is clearly an Astrological Solar, or “SUN” wheel which makes up St. Peter’s Square. 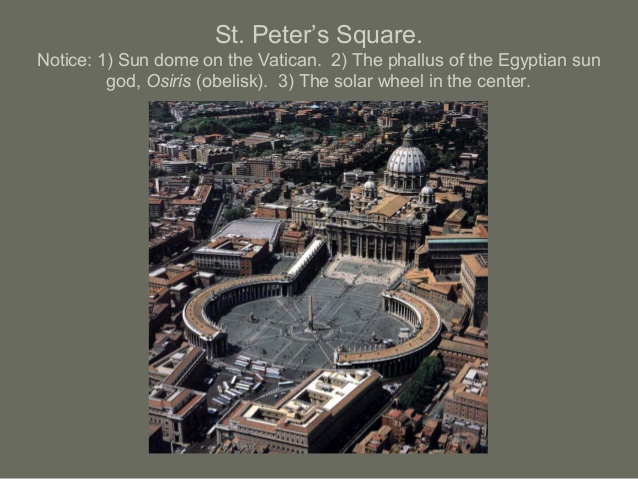 The “phallus” of the Egyptian Sun God “Osiris” stands right in front of the Sun Dome…, which also represents a woman’s womb!   Therefore, the phallus of the Sun God, impregnates the female Goddess to “pro-create” or “give life”.

This is nothing more than acknowledging the Ancient form of SEX WORSHIP that came from Ancient Egypt and from earlier Religions.

And…, if you “think” that the Obelisk standing in St. Peters Square is “NOT” the phallus of the Sun God Osiris…, THINK AGAIN!

That 3,200 year old Obelisk was “moved” all the way from Egypt (taken from the Temple of Osiris) and placed in Rome in 37 AD at the request of the Emperor Caligula (who was one of the most perverted Emperors Rome ever had) just so that he could have the phallus of Osiris for himself!

Only in about 1450 AD…, was it moved to be the Center Piece of the Vatican’s St. Peter’s Square!

Here is Ralph Woodrow talking about the Obelisk! 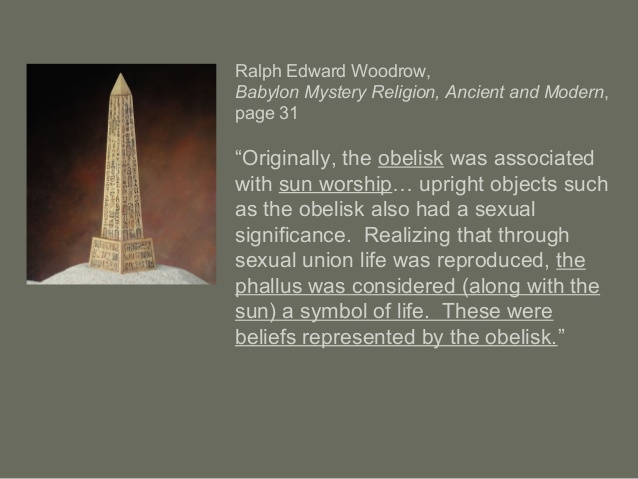 Now here is an exact duplicate of the SEXUAL set up that the Vatican has: 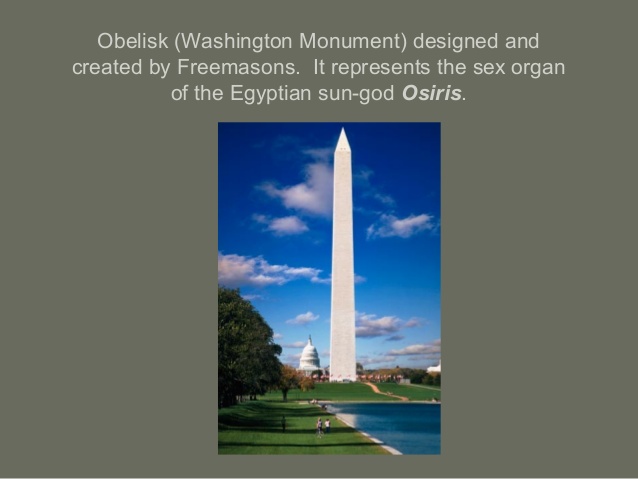 Do you notice the Dome of the Capital in the background?  Here again, the male phallus impregnates the female goddess womb which is the act of “creation”, and thus is the very SEAT OF POWER!

The “taking” of POWER is all very SEXUAL!

And every phallus and dome carefully placed around the world, tips it’s hat to this hidden knowledge!

This is why “magicians”…, who want to have much MORE POWER…, rape little children…, and “TAKE” or “STEAL” the power of their young bodies and spirits right from their “root” chakra…, by anally raping them!

And when the armies of Washington DC are sent to every corner of the globe in conquest and domination…., it is a type of RAPE that happens at a National Level in order to “steal”, or “take” the power of those nations, and add it unto those who run Washington!

For those who may have read: THE GREAT CON OF MAN…, what was the comment that William (Brett) Stillings made to me personally about the Military “higher ups” when I talked with him??

They are all into MAGIC…,all of them!

If they are all into “magic”…, well that makes them Magicians then…, doesn’t it??

“Horus” was the son of Osiris!  In the Egyptian Religion…, the priests of Horus dressed in fancy vestments! 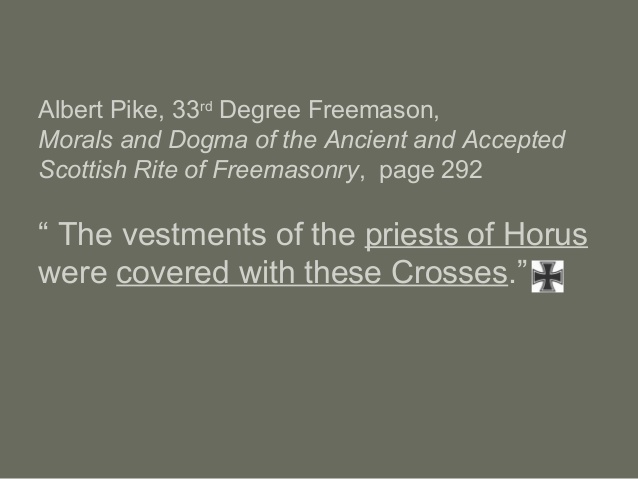 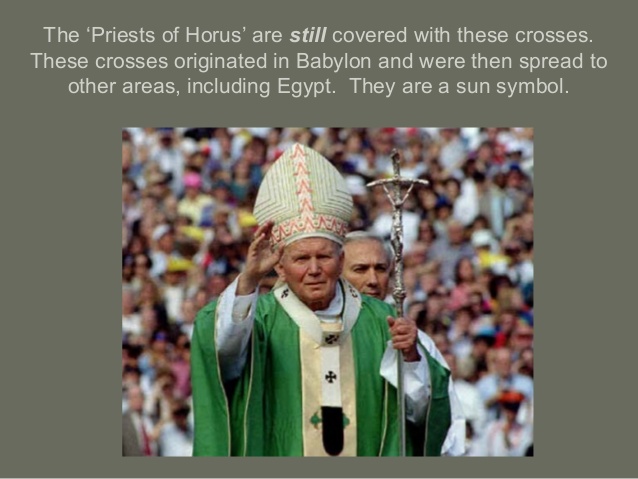 MARK PASSIO – HOW “REALITY” GETS CREATED

WHY IS THE “CABAL” SO DESPERATE TO PROTECT “COMET PING PONG”?…., CRISES ACTOR AND FALSE FLAG NOW ENGAGED