IT “MUST BE TRUE” BECAUSE EVERYONE IS SAYING IT…. 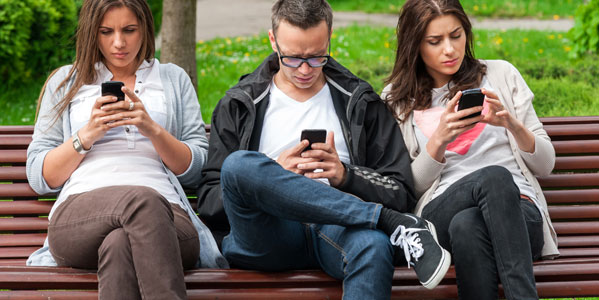 It must be true…, because everyone is saying it….

If ever there was a hallmark for a “lazy brain”…, these are the thoughts that are the give away!

Sadly…, I don’t know how many human beings (especially the young ones) consistently have these same thoughts running through their heads every single day and no one notices.

These “lazy brains” look out upon the sea of humanity as they go about their daily business…, and listen to what everyone is saying…, and come to a conclusion based NOT UPON ANY EVIDENCE…, but instead based on the common opinion!

In my life I have talked to many “millennial’s” over the course of the last few decades…, and even when these kids were young and still in school…., I was surprised by the common motto they all seemed to live by.

Under the guise of “efficiency”, almost down to last man…, they all seemed to live by a very strange set of rules.

The main motto or rule (one that was articulated to me by several millennials) is that they always strove to “get the most…, by doing the least”!

This in their minds was an “efficient” way to live!

We can see this group mindset manifesting all around us today in ways no one of the previous generations could have possibly imagined!

The demise of the American Shopping Centers and Malls all over the country are a direct result of this single mindset!

You see…, it is the “millennial’s” who do all of their shopping ONLINE!  It is the millennial’s who have taken to ordering everything from socks to pots and pans from Amazon.com and having them delivered right to their door rather than having to go out to an actual shopping center or mall and deal with a crowd to get what they want.

Millions of brick and mortar stores all over America are now going under due to an extreme lack of business while men like Jeff Bezos (owner of Amazon) become TRILLION-AIRS!

It is directly because of millennial’s that men like Jeff Bezos could then BUY the Washington Post and force it to write almost anything (even if untrue) to help him and his GLOBALIST friends become even MORE RICH!

And it all boils down to the strange…, and almost narcotic like mind set that these millennial’s have about living their lives “EFFICIENTLY”….

But as I’ve said…, where there is a (debatable upside) to this Millennial Religion…, there is a huge downside as well!

That downside is that not a single millennial is equipped to put any real effort into finding out what is really going on around them!

You see…, in an era of propaganda and lies…, where you really have to dig and spend a lot of time in research to discover the TRUTH…, the very thing that the millennial’s love more than anything…, (efficiency) goes right out the window!

You see…, how can an entire generation of Americans…, a generation that has lived by the unspoken code of “getting the most from doing the least”…, change their core operating systems in mid-stream and spend endless hours of “inefficient time wasting” looking for the TRUTH?

It would be like asking a frog to fly!

They just can’t do it!

So…, in order to “most efficiently” find out what the truth of any subject is…, a millennial will quickly poll all of their friends on Social Media to find out what everyone else is saying about a subject, and then base their decision upon what is true simply by how many people are saying it!

The Democratic/Liberal/Progressive Party…, made up mostly of millennial’s…, KNOWS THIS ONLY TOO WELL.

This is why they have employed both the Main Stream Media…, AND…, BIG TECH Corporations in on-line Social Media to “spread their version of reality” as far and wide as they can.

They know that if they saturate social media with propaganda and fake news…, then most millennial’s will never look any deeper because it would simply be an INEFFICIENT USE OF TIME to do so!

The “code” of efficiency is TOO STRONG in this generation!

Now…, having been born in the 1960’s…, there is no way that I can understand how or why the millennial’s think this way!   It is foreign to me…, as it is foreign to the baby boomers who had to fight World War II!

We expend what ever energy is needed to get a job done…, and to do it right and with perfection!  We do not think about efficiency!

So somewhere along the line…, an entire generation was either MIND CONTROLLED or “taught” or “programmed” with the idea that only maximum efficiency was an acceptable way to live!

Well…, like I said…, we just found the Achilles heal of that mind set!

It is very “inefficient” to have to spend any amount of time looking for the TRUTH…, and therefore…, this generation (as efficient as it is) will be the most lied to and deceived generation ever to walk the face of the planet!

We can see this happening as we speak!

The fallout of the millennial mind set is everywhere!

From the rise of huge mega corps like AMAZON…, and UBER…, to the fall of simple things like TRUTH and HONESTY…, the millennial’s will have left their mark on the entire world.

NONE OF IT (IN MY OPINION) IS VERY BENEFICIAL…, AND THIS IS COMING FROM A GUY BORN IN THE EARLY 60’s!

Of course this is another “down side” to the millennial code of efficiency.   If you can get it done sooner and quicker by cutting corners, cheating, or fudging…, then do so because it is MORE EFFICIENT!

Why did I even write this article??

Because almost no one in the Alternative Media has written about something so OBVIOUS!

Just talk to a millennial for a few days honestly and ask them what code they try to live their lives by…, and if they are honest…, you will soon hear almost every single one of them say:

I always try to get the most…, out of doing the least…..

“FORGIVING” DOES NOT MEAN “DOING NOTHING”

APOLOGIES TO MY READERS