JUST BECAUSE “YOU” CAN’T SEE WHAT’S COMING…, DOES NOT MEAN OTHERS CAN’T

noun
1.  care or provision for the future; provident care; prudence.
2.  the act or power of foreseeing; prevision; prescience.
3.  an act of looking forward.
4.  knowledge or insight gained by or as by looking forward; a view of the future.

It takes a special kind of human being to be able to see a “pattern” of events taking place, and then string a “dot connector line” along that path and then “extend it” to the seemingly “unknown” destination.

Many would call this impossible speculation…, but really…, if 20 dots all line up in a row, and are going as straight as an arrow…, then it does not take much imagination to simply extend the line a few more feet and look where it will end up after adding a few more dots.

This is EXACTLY what we are seeing and experiencing with what is called the LGBT “community.

You see…, Lesbians and Gays for years struggled with acceptance.  They wanted to be accepted for who they were!

Then, they were joined by the “Bi-sexuals” who only wanted to accepted for who THEY are.

Finally…, there were people who felt they needed to be another gender…, and they joined the already struggling group who only wanted to be recognized and accepted for “THEIR FEELINGS!”

Fine…, I get it…, but this is only the beginning of the STORY!

ENTER THE ILLUMINATI…, AND THE SATAN WORSHIPPERS

You see…, these men and women…, the ones who practice old world “BLACK MAGIC”…, only want be accepted and also do not want to be “judged” for who they are!

However…, there is a “problem” with this particular group…

So…, here is the question that every Illuminti Member and Satan Worshipper is asking themselves today…,

“…how do we “get” the greater part of humanity to “accept” what is basically unacceptable??”

Hitch your wagon to an already struggling group of people who only want to gain acceptance…, (namely the LGBT Community) and then infiltrate and support that group…, while “steering” their agenda in a totally new and unforeseen direction!

You see…, ALL OF THIS PERSONAL PRONOUN BULLSH*T…, is being rolled out for a single reason only

Remember all the crap about personal pronouns??

Yea…, well if you don’t remember…, let me remind you that the country of CANADA…, was seriously thinking about making it a HATE CRIME to simply refer to another individual as “he” or “she”…, if that individual did not want to be refered to as such!

Over the past year or so, we’ve observed in amazement as one ‘institution of higher indoctrination’ (a.k.a. “university”) after another came up with replacement pronouns for politically incorrect ‘hate speech’ like ‘freshman’.  Vanderbilt even forced its teachers and administrators to wear name tags defining their pronouns just so there would be absolutely no gender confusion that might lead to a nasty “triggering” event or unnoticed “microaggression (see: Vanderbilt University Name Placards For Faculty Offices Will Now Include “Preferred Pronouns”).

You see…, what has actually started to happen in all of these:

“I ONLY WANT TO BE ACCEPTED COMMUNITIES”…,

…is the total transmutation of their agenda by the DARK LORDS OF THE ILLUMINATI!!

You see…, in the Illuminati’s world…, everything is done by force!

This is how they operate…, and so if you see a group of people who suddenly are saying things like:

Then you know for 100 percent certain that this “group” has been infiltrated…, and is now being run by the ILLUMINATI!

Only in the world of the ILLUMINATI is it…

Do it MY way…, or I will hurt you with every ounce and measure of legal action…, force…, and brutality!

THIS IS THE SATANIC WAY

So why has the Illuminati chosen to infiltrate and USE this group??

Because they want to “ride the wave” of sympathy and “political correctness” that has been already garnered and worked for by these people!

In other words…, they want to co-opt it…, and then USE IT FOR THEIR PURPOSES.

Of course anyone who knows how the Illuminati operates…, knows that this is exactly what they do!

They have never worked an honest day in their lives…, but instead choose to parasite and to steal what they want.

Even if it is only “good will” and “sympathy”.

Yes…, especially if it is “good will” and “symapthy”.

Now…, for a very long time the practitioners of RITUAL CHILD SACRIFICE and the eaters of human flesh have been able to hide!

However…, they fear more than anything being exposed and feel that the “energy” may change so much that everyone SEES what they are doing.

So…., what they have done is to “create” a “plan” that involves USING the LGBT Community for their own ends.

First…, they need to get everyone in the world to criticize and vilify anyone and everyone…, who does NOT ACCEPT  transgenders!

(There is a very important reason for this by the way…, and I will get to it.)

This is being rolled out as we speak.

This is not just about “acceptance” as I’ve said…, but it is about actually crucifying anyone who DARES step out of line and hold a different opinion about “TRANSGENDER”.

See this article from Infowars.com

And if you remember THIS FASHION SHOW…, out of London…, we have men dressing like women in order to STOMP OUT GENDER IDENTITIES… 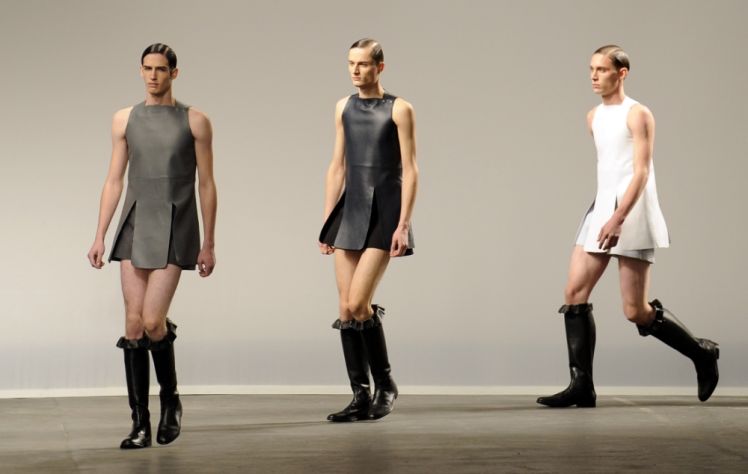 There is a greater PURPOSE to all of this however!

The LGBT Community has NO CLUE…, and NO IDEA what they are being used for!

You see…, for the next few years…, all kinds of DRACONIAN LAWS will be passed “making it a crime” to say anything about “transgender people”…, because THAT is a “HATE THING”.

But what (pray tell) is waiting in the wings…, that the Illuminati (and the Satanists) desperately want to roll out and have universally accepted??

The melding of MAN and MACHINE.

(Thank You LGBT’s…, your movement will be responsible for the total destruction of MANKIND as we know it…, if you don’t get wise to who is actually running your agenda.)

And “if” they can make it a crime to say a single negative thing about the melding of man and machine…, then the next step is to FORCE (yes force) humans to accept MACHINE IMPLANTS against their freewill…, because after all…, only a “hater” would not accept the blending of man and machine.

So…, if we want to stick a robotic chip into your brain at birth…, (to control you) and you don’t want that…, then it is a HATE CRIME against technology to refuse it.

This is where the damn “transgender” arguement is heading.

Dot by dot by dot…, as straight as an arrow…, and now extend that line and see where it’s leading!!

The only reason “transgender” is even a big deal at this point in history…, is to get the “BLUEPRINT” or the “OUTLINE” of the specially needed “laws on the books” so that when the SATANISTS finally want to roll out TRANS-HUMANISM…,  all of the HATE CRIME legislation will already be in place so that they can immediately STOMP out any objections with total brute and overwhelming FORCE!

YES…, THAT IS WHAT THE SATANISTS DO…, THIS IS HOW THEY OPERATE

Look at the word:

Then look at this word

You see how similar they are…, there’s a reason to this!  There is a method to their madness.

They will eventually claim it’s the SAME THING!

Now…, once the TRANS-HUMAN issue is taken care of…, and all of the specific HATE CRIME laws are “on the books” for speaking out against the melding of man and machine…, and anyone who verbally and openly objects is IN PRISON…

Then the very same group…, under the cover of the LGBT agenda…, will roll out the idea that sex with little children needs to be PROTECTED as a sexual orientation.

The Satanists will then say that ANYONE who objects is a “HATER”…, and someone who needs to be “criminally” dealt with as having committed a HATE CRIME.

And…, only a HATER…, a NAZI…, a DICTATOR would want to take away someones right to choose to do that.

This is where the ILLUMINATI and the SATANISTS are going…, as they have gotten into the “driver’s seat” of the LGBT Community.

They have their ugly hands on the steering wheel, and are about to take the LGBT group out for the ride of their lives.

That is UNLESS…, the LGBT’s get their heads on straight and get a clue that beating people over the heads with LAWS against speaking out will only end badly for them as well.

IF the SATANISTS can achieve that…, and believe me…, legalizing sex with very little children is really one of their goals…, only THEN will they feel safe enough to bring out the idea that it is ALSO okay…, and part of their FREEDOM OF RELIGION to kill and sacrifice little children to MOLOCH.

What happens next is UP TO YOU!

Either you will speak out NOW

OR…, you will soon live in a world where NO ONE has a right to speak out EVER!

THE BIGGEST “LIE” THERE IS