LEO ZAGAMI – THE SECRET VATICAN MEETING BETWEEN PAROLIN AND POMPEO 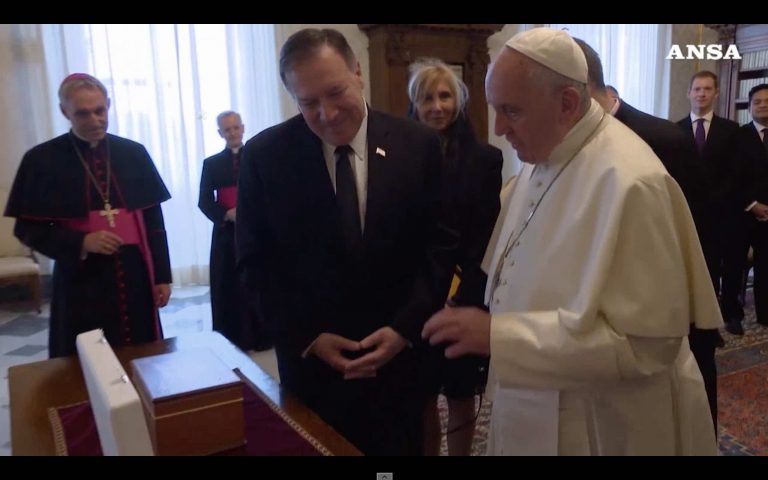 Vatican City – Today the Pope received U.S. Secretary of State Mike Pompeo in a private audience at the Vatican that is a closed-door interview. Yesterday, Pompeo took part in a bilateral symposium organized by the American Embassy and the Holy See on the subject of religious freedom. I explained in an article I published yesterday the real reason for this visit that culminated today with a papal audience and Mike Pompeo:

So, it is no wonder that Father Georg Gänsewein, Prefect of the papal household, who is said to have orchestrated the raid conducted at the offices of the general affairs section of the Secretariat of State on October 1st, 2019,  was there next to Mike Pompeo and the Pope this morning. In the fragment of Pompeo’s speech made public through the media, Pompeo stressed the importance of strengthening the alliance between the U.S. and the Vatican to support the fundamental right of religious freedom.

But in reality, there was a lot more at stake behind the scenes this morning in Rome, especially after the recent attacks conducted by Jesuit agent Nancy Pelosi, who is also linked to Cosa Nostra, and various Knights of Malta loyal to the Jesuit Pope to undermind the U.S. Presidency with another impeachment farse.

At the end of his speech, the American Secretary of State was received by the Secretary of State, Cardinal Parolin, and that’s when the real diplomatic business was conducted between the two, as the raid of October 1st involved the offices within the Vatican’s Secretariat of State, to avoid a similar raid being made by Italian authorities.  In the meantime, the Italian news magazine L’Espresso reported yesterday that five Vatican employees have been suspended following the raid in question. An October 2nd internal memo from the government of the Vatican City State conveyed that the five employees have been “suspended from service.”  The memo was published by L’Espresso.

Among the suspended employees are Msgr. Mauro Carlino who lives next door to the Pope in the Domus Sanctae Marthae, who used to oversee documentation at the Secretariat of State and spy for Pope Francis, along with layman Tomasso Di Ruzza, director of the Vatican’s Financial Intelligence Authority. Both are now accused by the Vatican judiciary of money- laundering activities, that could if exposed, jeopardize the very existence of the Vatican. Two other men and one woman are also listed as suspended from their activities and their Vatican security passes are now invalid.

The Vatican investigators are said to have been analyzing some suspicious financial flow on the accounts of the Holy See reminiscent of the Godfather Part III. These are the charitable offerings that come every year from the faithful from all over the world to the pontiff, who should then use them for charitable works towards the weakest and most needy which instead were piling up in accounts and investments that had reached the record sum of nearly 400 million euros in 2015.

But who was really behind the control of money? As I wrote back in the summer of 2012, an official request to investigate such matters was made by Italian authorities to the Institute for Religious Works, but, of course, the Vatican refused to disclose the records of the account in question held by Father Ninni Treppiedi– who is currently suspended from serving as a priest, but still operating under Vatican control. So why is  Cardinal Parolin or the Vatican judiciary not talking about Father Ninni Treppiedi? Treppiedi can’t be mentioned because he worked on money-laundering operations run by none other than the ultimate Mafia Godfather from Sicily, Matteo Messina Denaro.

Denaro is the most important and elusive Mafia fugitive of all time, the last Cosa Nostra boss still at large protected by both the Vatican and intelligence sources says the C.I.A. If the majority of Catholic’s knew the truth they would likely leave the Church if even a fraction of the above came to light in the mainstream media. The Vatican is already fighting to stay credible due to their constant pedophilia scandals and something like this will inevitably lead to an even bigger crisis or a schism. Imagine money from Catholics from all over the world involved in money-laundering operations run with Cosa Nostra.

At this point, the Vatican, in cooperation with the Sovereign Military Order of Malta and U.S. Intelligence arranged for the preemptive strike/raid on the 1st of October, 2019 to avoid further scrutiny and investigation by the Italian authorities and make it possible for the U.S. and the Vatican to discuss such matters behind closed doors. At this point, a deal was almost certainly made by Mike Pompeo and Cardinal Pietro Parolin, who is also connected to the Vatican Illuminati in regards to getting Nancy Pelosi off the President’s back with her impeachment farce.

Pelosi, who allegedly known in the Italian mob as “Power Nana,”ultimately takes orders from the Vatican, so if Cardinal Parolin calls on her to stop this BS we can finally proceed with the victory of President Trump in 2020. On a day when a former special envoy for Ukraine was due to be interviewed in the impeachment probe, Pompeo was working on behalf of Americans to avoid the Jesuit/Democratic take over of this country.

Let’s remember what I pointed out in my previous article :

May God Bless Mike Pompeo and President Donald J. Trump because they are fighting against the biggest evil on this planet because the fall of Babylon the Great is near. Remember what St. Peter said, Rome is the new Babylon,  we are not afraid as we work with the Holy Spirit.

THE ONLY WAY TO SAVE EARTH IS TO START EATING BABIES !!