What does the non cogent  “DEMOCRATIC PARTY” fail to see happening within it’s own ranks??   (And sadly…, some within the Republican Parties own ranks?)

They fail to see that “At the Very Top” of their structures…, they are being run by men and women who follow LUCIFIER!

There is NO GREATER evidence of this statement than Saul Alinksy’s “Rules For Radicals!!

His book:  RULES FOR RADICALS is the very RECIPE for what we see happening IN OUR WORLD at this very moment!

I DARE anyone who has two eyes (that are working)…, to prove me wrong!

Watch the MSM (Main Stream Media) carefully…, and watch all of the movers and shakers within the Democratic opposition to Donald Trump in the daily media feed…, and it is as if they have a personal copy of RULES FOR RADICALS under their pillow, and are reading it every night before bed.

Remember however…., that Saul Alinsky dedicated this very book:

TO LUCIFER.    (The original Radical)

So…, for those who have never seen, nor bothered to read the 11 RULES in Alinsky’s Book…, here they are:

Rules for Radicals
In 1971, Saul Alinsky wrote an entertaining classic on grassroots organizing titled Rules for Radicals. Those who prefer cooperative tactics describe the book as out-of-date.

Nevertheless, it provides some of the best advice on confrontational tactics. Alinsky begins this way:
What follows is for those who want to change the world from what it is to what they believe it should be. The Prince was written by Machiavelli for the Haves on how to hold power. Rules for Radicals is written for the Have-Nots on how to take it away.
His “rules” derive from many successful campaigns where he helped people fighting power and privilege

For Alinsky, organizing is the process of highlighting what is wrong and convincing people they can actually do something about it. The two are linked. If people feel they don’t have the power to change a bad situation, they stop thinking about it.

According to Alinsky, the best community organizer — especially a paid organizer from outside — must first overcome suspicion and establish credibility.

Next the organizer must begin the task of agitating: rubbing resentments, fanning hostilities, and searching out controversy. An organizer has to attack apathy and disturb the prevailing patterns of complacent community life where people have simply come to accept a bad situation. Alinsky would say, “The first step in community organization is community disorganization.”

Through a process combining hope and resentment, the organizer tries to create a “massive army” that brings in as many recruits as possible from local organizations, churches, services groups, labor unions, corner gangs, and individuals.

Alinsky provides a collection of rules to guide the process. But he emphasizes these rules must be translated into real-life tactics that are fluid and responsive to the situation at hand.

Rule 1: Power is not only what you have, but what an opponent thinks you have. If your organization is small, hide your numbers in the dark and raise a din that will make everyone think you have many more people than you do.

Rule 2: Never go outside the experience of your people.
The result is confusion, fear, and retreat.

Rule 3: Whenever possible, go outside the experience of an opponent. Here is where you DO want to cause confusion, fear, and retreat.

Rule 4: Make opponents live up to their own book of rules. “You can kill them with this, for they can no more obey their own rules than the Christian church can live up to Christianity.”

Rule 5: Ridicule is man’s most potent weapon. It’s hard to counterattack ridicule, and it infuriates the opposition, which then reacts to your advantage.

Rule 6: A good tactic is one your people enjoy. “If your people aren’t having a ball doing it, there is something very wrong with the tactic.”

Rule 7: A tactic that drags on for too long becomes a drag. Commitment may become ritualistic as people turn to other issues.

Rule 8: Keep the pressure on. Use different tactics and actions and use all events of the period for your purpose. “The major premise for tactics is the development of operations that will maintain a constant pressure upon the opposition. It is this that will cause the opposition to react to your advantage.”

Rule 9: The threat is more terrifying than the thing itself. When Alinsky leaked word that large numbers of poor people were going to tie up the washrooms of O’Hare Airport, Chicago city authorities quickly agreed to act on a longstanding commitment to a ghetto organization. They imagined the mayhem as thousands of passengers poured off airplanes to discover every washroom occupied. Then they imagined the international embarrassment and the damage to the city’s reputation.

Rule 10: The price of a successful attack is a constructive alternative. Avoid being trapped by an opponent or an interviewer who says, “Okay, what would you do?”

Rule 11: Pick the target, freeze it, personalize it, polarize it. Don’t try to attack abstract corporations or bureaucracies. Identify a responsible individual. Ignore attempts to shift or spread the blame.

According to Alinsky, the main job of the organizer is to bait an opponent into reacting. “The enemy properly goaded and guided in his reaction will be your major strength.”

So let’s start with Rules for Radicals….RULE NUMBERE 5….., RIDICULE!

Now…, let’s look at the Twitter World…, and all of those people who do nothing but Tweet slander and Ridicule all day long!

Yes…, for those men and women who…, (like Alinksy) dearly love LUCIFER…, Rule number 5…, is a huge battle tactic!   Let’s read it together!!

Rule 5:     Ridicule is man’s most potent weapon. It’s hard to counterattack ridicule, and it infuriates the opposition, which then reacts to your advantage.

Now for those of you who LOVE TRUTH…, like I do…, and therefore LOVE GOD…, like I do…, ridiculing your opponent is unthinkable!   Teaching them…, having an intelligent debate…, and/or a logical discussion about the pros and cons of an issue is the way for adults to sort out disagreements.

However…, THIS IS NOT what LUCIFEIANS do.  They know their position is SATANIC…, and therefore makes no sense!  So, instead of engaging in debate…, they choose to RIDICULE anyone who opposes their viewpoint!

Remember…, Republicans and the MEDIA are good at this too!   Anyone who follows SATANIC thought processes will EMBRACE THIS!

READ RULE NUMBER FIVE over and over and get this through your head!

Now…, this book…, written in 1971 by Alinsky…, was one of HILLARY CLINTONS very favorite books!

She adored Alinksky so much…, she wrote her Senior Thesis about him!!

Now…, let’s go back to Milo Yiannoppolis, and his Berkeley experience!  He just happens to be a young, good looking, GAY activist who supports Donald Trump.

And because ALL PEOPLE who support Donald Trump are supposed to be “Homophobes”…, there is NO LOGICAL ARGUMENT in the world one can take against Milo that will stick!

And so…, instead of logical debate…, the ONLY way to attack Milo is Saul Alinsky’s RULE NUMBER FIVE.

Milo must be RIDICULED!!

Yes, yes…, HAIL SATAN.., HAIL LUCIFER…, your followers…, have read your recipe book…, (deeply loved by Clinton) and are now very receptive to just how to help “bring into manifestation” your 1000 years of REIGN!!

If only the crazy “millennials” would CARE to read a book once in a while…, instead of “Googling and Twittering” every second of every day…, they might actually SEE what is happening around them.

Rule 8: Keep the pressure on. Use different tactics and actions and use all events of the period for your purpose. “The major premise for tactics is the development of operations that will maintain a constant pressure upon the opposition. It is this that will cause the opposition to react to your advantage.”

What do you see HOLLYWOOD (Satan Central) doing with concern to Donald Trump??   But it is not just Hollywood…, but also the “Deep State”…, which in my opinion is equally as SATANIC as Hollywood!

Keep the Pressure On….

THE RUSSIANS DID IT!

No matter what happens in real or current world events…, keep the pressure on!  Always fall back to the SAME OLD LINE…, always use the same excuse…, never let up!!

THE RUSSIANS DID IT!

You see.., the “argument” according to RULES FOR RADICALS does not need to make sense!  It just needs to be repeated over and over again!

Rule 11: Pick the target, freeze it, personalize it, polarize it. Don’t try to attack abstract corporations or bureaucracies. Identify a responsible individual.

Ignore all attempts to shift or spread the blame. 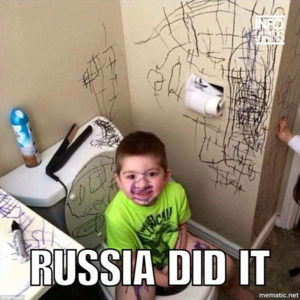 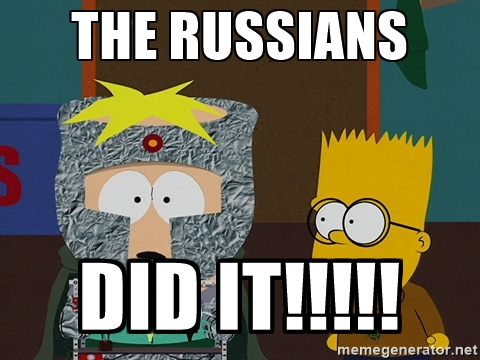 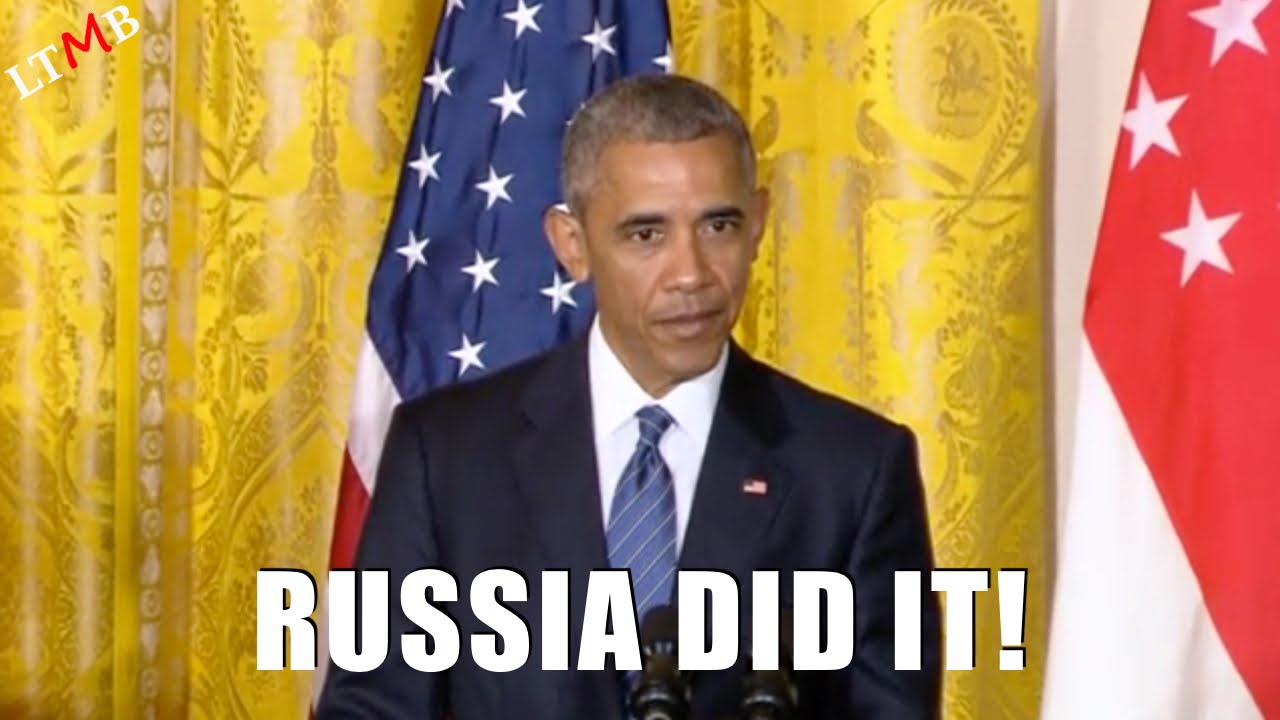 Yes…, THANK YOU LUCIFER…, you certainly are teaching all of those who follow you to cause the MOST perfect storm with non-sense, ridicule, and meaningless anarchy!!      Your “followers” are ON THE JOB!!

This next link is the perfect must read:

YOU CAN’T LIE TO PEOPLE…, AND THEN CLAIM TO CARE ABOUT THEM

the “jig” is up! the hidden dark agenda is exposed! we arise and shine in the light of Truth!