This NGO guides the UN. I was on their Web page about a year ago and I couldn’t believe the new age luciferian crap they were pushing. When I went back today all of their site is private now. Hmmm. Too many people red pilled now!

If u want to know why UN funds migrant invasions, into child trafficking, or other evil crap under the guise of doing good, see this link.

The Lucis Trust is the Publishing House which prints and disseminates United Nations material. It is a devastating indictment of the New Age and Pagan nature of the UN.

Lucis Trust was established in 1922 as Lucifer Trust by Alice Bailey as the publishing company to disseminate the books of Bailey and Blavatsky and the Theosophical Society. The title page of Alice Bailey’s book, ‘Initiation, Human and Solar’ was originally printed in 1922, and clearly shows the publishing house as ‘Lucifer Publishing CoIn 1923.’ 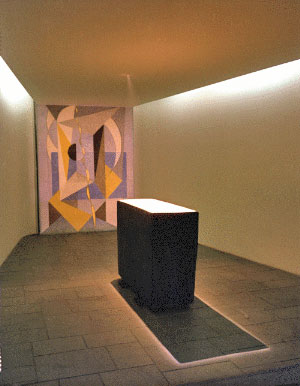 Bailey changed the name to Lucis Trust, because Lucifer Trust revealed the true nature of the New Age Movement too clearly. (Constance Cumbey, The Hidden Dangers of the Rainbow, p. 49). A quick trip to any New Age bookstore will reveal that many of the hard-core New Age books are published by Lucis Trust.

At one time, the Lucis Trust office in New York was located at 666 United Nations Plaza and is a member of the Economic and Social Council of the United Nations under a slick program called “World Goodwill”.

In an Alice Bailey book called “Education for a New Age”; she suggests that in the new age “World Citizenship should be the goal of the enlightened, with a world federation and a world brain.” In other words – a One World Government New World Order.

Luci’s Trust is sponsored by among others Robert McNamara, former minister of Defense in the USA, president of the World Bank, member of the Rockefeller Foundation, and Thomas Watson (IBM, former ambassador in Moscow).

Luci’s Trust sponsors among others the following organizations:

The United Nations has long been one of the foremost world harbingers for the “New Spirituality” and the gathering “New World Order” based on ancient occult and freemasonic principles.

Seven years after the birth of the UN, a book was published by the theosophist and founder of the Lucis Trust, Alice Bailey, claiming that

“Evidence of the growth of the human intellect along the needed receptive lines [for the preparation of the New Age] can be seen in the “planning” of various nations and in the efforts of the United Nations to formulate a world plan… From the very start of this unfoldment, three occult factors have governed the development of all these plans”

“Within the United Nations is the germ and seed of a great international and meditating, reflective group – a group of thinking and informed men and women in whose hands lies the destiny of humanity.

The stated aim of this group is,

Teilhard de Chardin (and edited by Robert Muller), it is revealed,

“Dag Hammarskjöld, the rational Nordic economist, had ended up as a mystic. He too held at the end of his life that spirituality was the ultimate key to our earthly fate in time and space”

[Robert Muller (ed.), The Desire to be Human: A Global Reconnaissance of Human Perspectives in an Age of Transformation (Miranana, 1983), p.304.]

William Jasper, author of “A New World Religion” describes the religion of the UN:

http://www.lucistrust.org you can find out much more about them and how they’re involved with the work of the United Nations by following their link “World Goodwill” at the top of their home page.

This Website is sponsored by the United Nations and the whole NWO philosophy is there.

Aquarian Age Community, as they call themselves, has this proud quote at the header of their page:

Such a grandeur is ahead!
Such a great step awaits a fiery affirmation.
Our teaching and the affirmation of the Higher
Principles will reveal so much that is great to humanity!
A great period is drawing near: Thus we do create together.
Fiery World
Vol. III, par. 149

Curtis Dall, FD Roosevelt’s son in law as quoted in his book, My Exploited Father in Law:

“For a long time I felt that FDR had developed many thoughts and ideas that were his own to benefit this country, the United States.

The UN is but a long range, international banking apparatus nearly set up for financial and economic profit by a small group of powerful One World Revolutionaries, hungry for profit and power.

The depression was the calculated ‘shearing’ of the public by the World Money powers, triggered by the planned sudden shortage of supply of call money in the New York money market…privately owned Federal Reserve Bank.”

A MESSAGE FROM “PROCYON”

there is another CON most people don`t realize.
The UN and the United Nation are two different
entities.

What is the UN?

By Anna Von Reitz
Here is your Test Question for today: What is the UN?
All those who answered, “Why, the United Nations,
of course.” — get an “F” and goto the back of the line.
The “UN” is a corporation founded in France several
years before the United Nations Charter was ever created.
And here, for your edification, are the Principal Parties of
Interest driving the “UN Agenda”—–
Current version UN Corp dba World Bank
dba FEDERAL RESERVE —
52% owned by Rothschild Bank of London and Berlin;
8% owned by Lazard Freres Bank of Paris;
8% owned by Israel Moses Seif Bank of Italy
8% owned by Warburg Bank of Hamburg and Amsterdam;
6% owned by Lehman Brothers of New York;
6% owned by Kuhn & Loeb of New York;
6% owned by Chase Manhattan/Rockefeller Bank of New York;
6% owned by Goldman Sachs.
(There may be some changes in ownership(s) since this list was compiled, but the
above is accurate for the most part.)

Thank you for this information! Your comments are always helpful!

This information is very interesting, HOWEVER…, the larger point that I was trying to make with this post…, is that LUCIS TRUST…, (which started out as LUCIFER TRUST) is behind the U.N.

Now…, the BIG REVEAL in that story is that ALICE BAILEY (who is the third woman to head up the THEOSOPHY SOCIETY …, after Annie Bessant and Helena Blavatsky) formed and started the LUCIFER TRUST.

Now…, rememeber who Helena Blavatsky is…, SHE IS THE GOD-MOTHER OF THE NEW AGE!

The NEW AGE…, is a LUCIFERIAN CREATION!