Nothing happening in the world as we speak was “unpredictable” or impossible to foresee!  In fact, for some of us, it was all too easy to predict, and all too easy to see coming from far down the road…

For some readers, this “truth” blog was never going to be easy to read.  It was always going to depend on how ready they were to let go of fantasies, illusions, and propaganda, and simply to look at the TRUTH the way it is without any window dressing placed upon it.

People are funny beings.  They want to indulge in countless things that make them sick, but at the same time, they always want to have perfect health as well.  Just look at every heavy smoker, or heavy drinker and tell me that I’m wrong about this.

What was never, (and I do mean NEVER) really understood – until a few of us pointed it out – is that there are far more ways to make you physically sick than just smoking and drinking.

There is far more taking place here on Earth at this time, and it has to do with how “we” interact with each other on almost every level you can think of.  We “were”, and I do mean were moving very quickly back toward open SLAVERY!


A few of us – the predicting types – saw this coming and raised the “alarm” just in time.  And now, there is a short pause of sorts while America and most of the world around it takes a good look at open SLAVERY (again) and tries to decide if that is what it wants to experience.

Personal Freedoms have been eroding (quite predictably) as Governmental Control and Regulations have grown bigger and fatter over time.  Each step taken toward the lessening of individual freedom, the closer the world gets to open SLAVERY.

You can not separate the two – even though you think that it is possible.

The more mankind tries to have a large centralized “power structure” – where all power comes from one single place – the more SLAVERY and the complete loss of freedoms for some – starts to manifest.

We were in the beginning stages of re-introducing open SLAVERY in America and in the rest of the world, but due the LOUD ALARM BELLS being rung by just a handful of good men – a pause has been taken to see if that is where “we” want to go (yet again).

The real problem – as I see it – is that no one on the planet wants to “fess up” and admit to the DAMAGE or HARM they are causing other people.

You see, it’s nice to “want” this – or to “want” that – but what happens when what you WANT causes damage to others?

Most people are very willing to overlook harm to others – if they can “get” something they desperately want!

Please don’t argue with me about this.

The real truth that no one wants to look at is that ANTIFA is made up former NEW AGERS – people who “think green” and want the use solar and wind power over fossil fuels.

They are people who are vegetarians and don’t want to kill animals.  They are people who would vote for Hillary Clinton again in a heartbeat because just like Hillary (who uses magic) – they too (as New Agers) are deeply involved in Wicca and other forms of Magic.

The kinds of magic that anyone can find in Books sold in New Age Bookstores.

So these “young” college level kids who love magic, think green, are vegetarians and that don’t want to kill animals are now out in the streets in mass burning, looting, pillaging, and beating up other men and women who “they say” are the enemy.

These New Agers are also the ones who don’t care about ABORTION and the killing of little babies because they say too many kids are bad for the environment, and causes Global Warming.

So these New Agers (and yes I’m picking on one small group here) are doing everything they can to limit and reduce individual freedoms – without even knowing (because they are young and stupid) that this kind of reduction of freedoms brings back the full manifestation of HUMAN SLAVERY INTO THE WORLD.

People ask me constantly why I pick on New Agers so much and there is a good reason for this.   The NEW AGE claims to be the “peaceful answer” to all of the worlds problems.  It claims to be non-judging and tolerant – but it is the very kind of chaotic crap that has been tried over and over and will NEVER WORK.

It is ready to go to battle to pound its beliefs into the minds of all of the unbelievers!

And just like every other religion (most notably Islam) the followers that really are peaceful and tolerant will NEVER (this means never) speak up and speak out against their own who are saying, thinking, and doing horrible things in the name of the group.

So now you’ve got older and more peaceful New Agers who literally refuse to speak up and speak out and say:

Hey wait a minute kids…, THAT IS NOT WHAT GOD WANTS FROM US!

Ask yourself – just WHO ARE these kids in Portland Oregon who are burning, looting, and pillaging?   What are their beliefs?   Where did they get them?  What are their goals?  Why do they think Hillary or Obama were such “good” people? 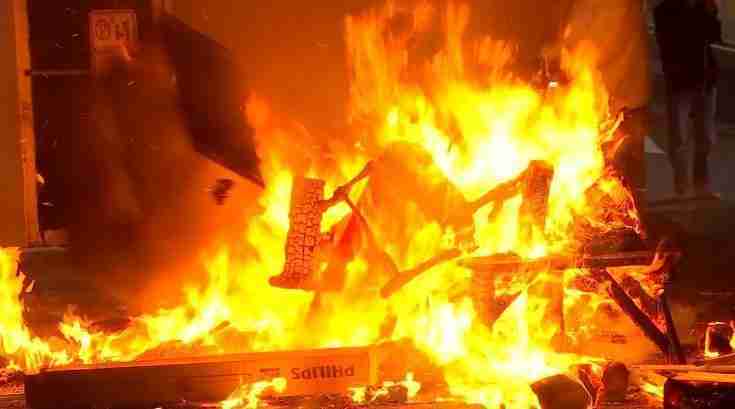 THE UNSEEN REALMS – PART ONE (Repost)

FAR MORE WAYS TO MAKE YOU SICK…, OR TO HEAL YOU