CONGRESS AND THE COURTS – CORRUPTION BEYOND MEASURE 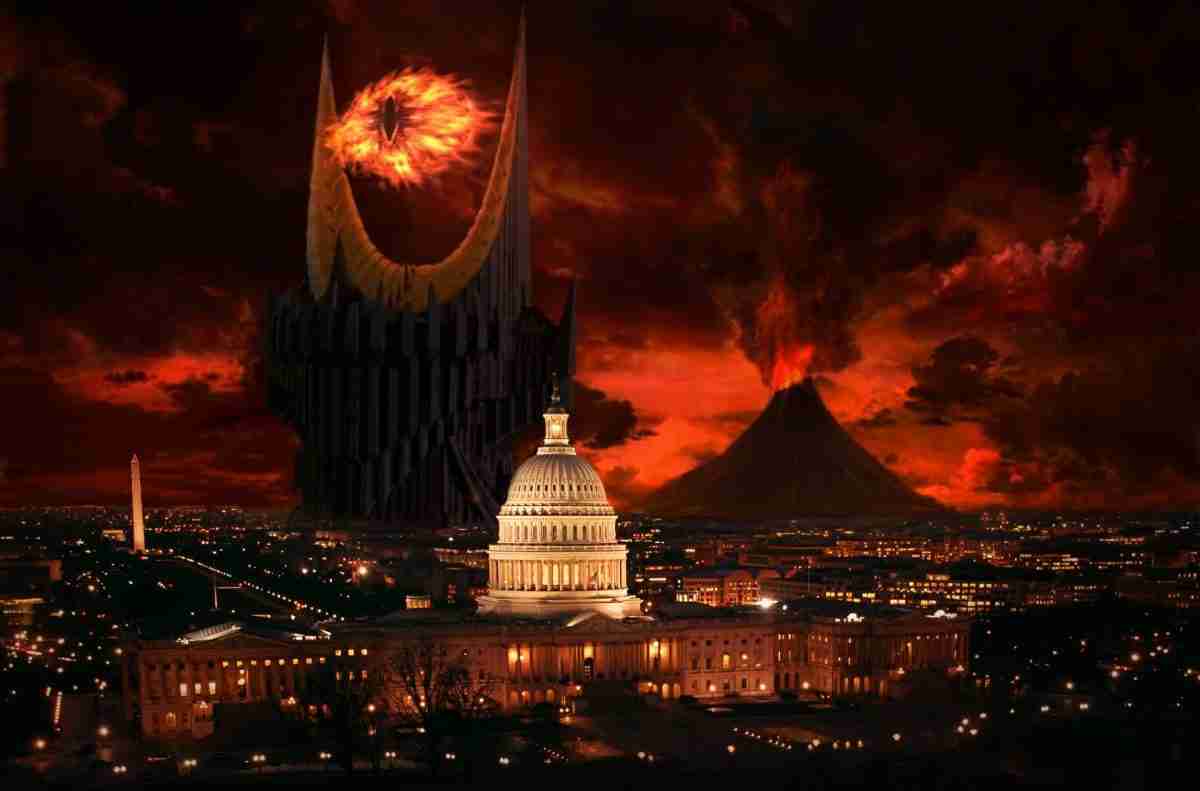 This video from Juan O. Savin – Honorary Time Traveler – gives us vital information, but leaves so much out.  Please watch and then read below!

I have known for some time that America would eventually be at “war” with its own courts.  There really was no where else for this to go.  Juan O. Savin gives us a tiny (and let’s be frank here) basically myopic view of how the Congress and the Courts rubber stamped the fraudulent victory of Joe Biden over Donald Trump (even though it is impossible for Biden to have actually won) and he does it as if this is something that just happened within a few short decades.

What Savin completely overlooks is that this single eventuality was all but guaranteed from the very first moment that the central bankers of the Federal Reserve took over the creation and distribution of our money in 1913!

I have been writing about this for quite some time, and yet it does not seem to be sinking in.  My view on this is not only completely valid, but is also mathematically precise, and it should have been reviewed by those in high levels of academia and the highest branches of US Military Intelligence.  See the post below.

MATHEMATICS, LOGIC, FAKE NEWS, AND OTHER THINGS – PART ONE

You see, once the GREAT CON of – “Birth/Berth Certificates” – started here in America and across the world – and the unlawful “registry process” of every man, woman, and child’s body “vessel” was recorded as property of the VATICAN (aka the Illuminati) – at that very moment, the deadly missile that would destroy us all – was launched!

That deadly missile has been IN FLIGHT all of this time – and the destruction that it would ultimately reek upon our nations was GUARANTEED, it was simply not made yet manifest while the missile was in flight.

Again, please see article above – and this time around – do read it carefully.


OUR U.S. MILITARY HAS “KNOWN” HOW THE CENTRAL BANKS ARE USING BIRTH CERTIFICATES – TO “FINANCE” THE GLOBAL MONETARY SYSTEM.

In other words, they “saw” this missile flying in the air over our heads for over 100 years!  Now, in the least grand tradition of our brave fighting men and women, instead of trying to destroy the target (which is what you do when a dangerous missile is flying over your head) they ridicul0usly tried to take out “part” of the missile, while leaving the other part flying.

They “knew” of  “Admiralty Law” – (Navy) – and allowed it to continue because it aided them.  The “yellow fringed flag” that is displayed in every Court Room in America tells us that our Courts are FOREIGN COURTS and do not even have lawful Jurisdiction over Americans.

Now, any one with a 5 year old education can see that this is about as dumb and dumb can get.  You see, the COURTS and our MONEY SYSTEM are totally and completely 100 percent tied to each other.  They are two sides of the same coin.  So leaving one untouched means you have to leave the other untouched as well.


Or, something completely MORONIC would be to try to “correct” and monitor the COURTS here in America (even though the are FOREIGN), without actually correcting the MONEY SYSTEM that the Courts are running on!

This would be like trying to take out half of the deadly missile while leaving the other half in flight!

In the same sense, trying to take down the FIAT MONEY SYSTEM without taking down (entirely) the COURTS, once again, is like trying to take out half the deadly missile and leave the other half flying!

WHO – WITH ANY BRAINS – DOES THIS?

These two (seemingly separate systems) are the very SAME THING!

And, for those in the military who are reading this –  you really don’t need me to be telling you this – you CAN’T shoot down half a missile!  You have to shoot the WHOLE THING down.

This paper money was printed in 1963 (see series date on the lower right side).

Created by an EO – Executive Order written by Kennedy – please notice that this is NOT a FEDERAL RESERVE NOTE – but instead it is a UNITED STATES NOTE. (at the very top).

Also there is no stamp from any FEDERAL RESERVE on the left side – meaning that the European Oligarchs could not charge us interest on this money, nor manipulate America any longer.

Once again, for those who are lost – here is a report – and a flow chart – done by a FORENSIC ANALYST which shows us conclusively that our entire MONEY SYSTEM here in America runs off of “penal bonds” – which are then turned into (through the use of the MILLER ACT) into tax exempt “munis” or Municipal Bonds, through the illegal (yes illegal) conversion of TRUST BONDS belonging to those who get unlawfully thrown into jail by:

For those who can not or will not “click” on the link above – and thus refuse to learn – here is the chart – without all of the “interactive” information you can get when you actually load the chart! 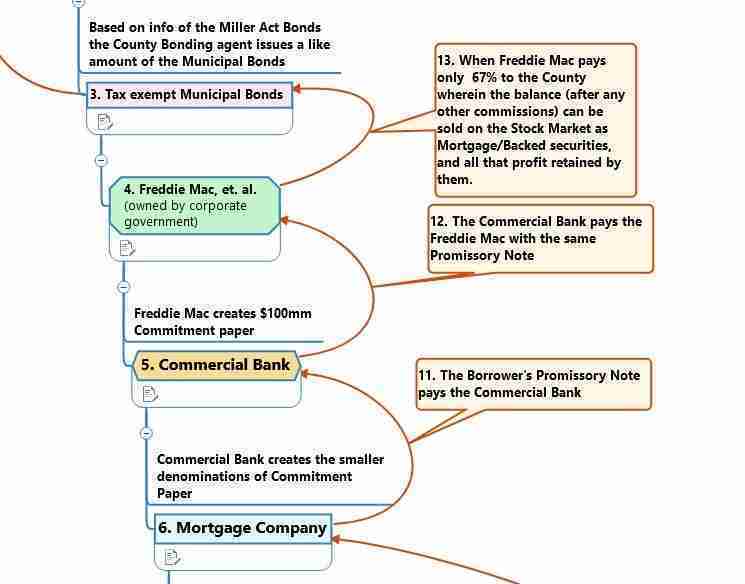 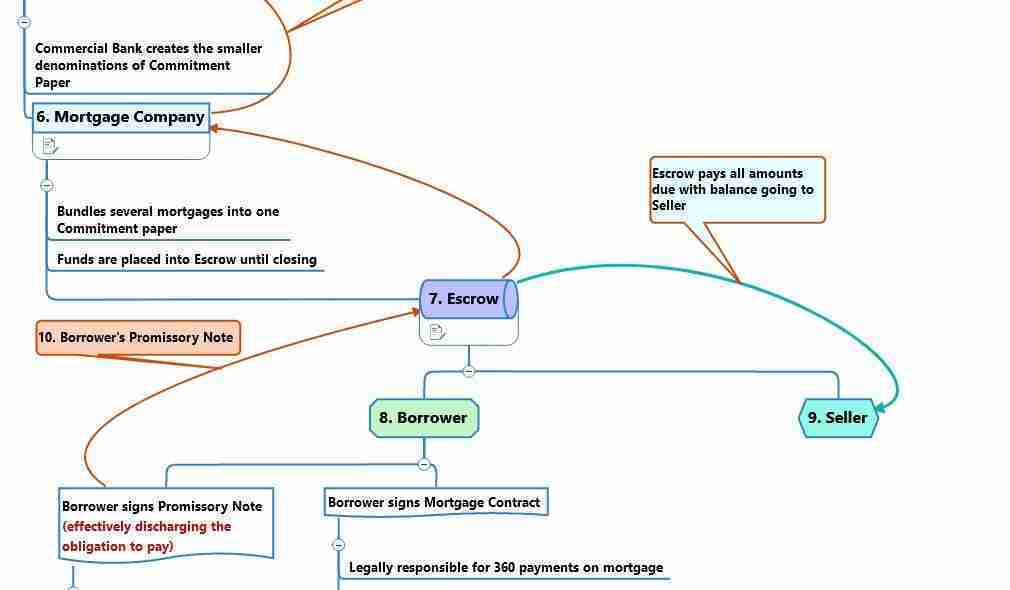 So if you read the chart above (and you understand it) – what you can see is that “MONEY” is created into our system by “arresting people” and then stealing money from their personal TRUST BOND – a bond that was created with the creation of that person’s Birth Certificate!  Therefore the ONLY WAY to create more money is to ARREST and JAIL more people!

So there you are people – proof right in front of your faces!  Our ENTIRE MONEY SYSTEM/=  – a “for profit system” that is being run by the COURT SYSTEM/= – for the EUROPEAN OLIGARCHS/= – – who set up our FEDERAL RESERVE SYSTEM/= – to serve their agenda and not ours.

And, just so you know, and can follow with my line of thinking here – that deadly missile was fired on America over 100 years ago (in 1913)!

It has simply been in flight this WHOLE TIME – waiting to land on our very heads – which it finally has with the rubber stamping of a fraudulent presidential election that took away America’s Votes and gave them to those who bought and paid for the VATICAN/FEDERAL RESERVE/BIRTH CERTIFICATE/COURT SYSTEMS.

YOU CAN’T SHOOT DOWN HALF OF A MISSILE

So here is the FIVE DOLLAR QUESTION – asked in honor of Lincoln – how is it possible that you expected a totally owned and Corrupt Court System to do anything BUT – rubber stamp the election fraud – and give the victory over to Biden – who was a bought and paid for tool of the forces working AGAINST AMERICA?

Consider this a Math Question – AND – a question in Logic!

This would be like asking a dog to stop wagging it’s tail.

Now, since the American COURT SYSTEM is 100 percent totally corrupt – and in the “bag” so to speak (due to Admiralty Law) to FOREIGN influences.  Then, ergo, as I have written before:

What I need is the average American who reads this to STOP PRETENDING and to STOP DELUDING YOURSELVES that this is okay!

Because – THIS AND ONLY THIS – is why and how your “election” of Donald Trump was stolen – and for NO OTHER REASON.

By not knowing what I’ve just written above – none of you actually know the WHY of what is going on – and so you do NOT COME TO READ HERE WITH ANY KNOWLEDGE!

Shall I now repost every article I’ve written – WARNING of this very problem – of this deadly missile flying over your heads:

THE GREAT CON OF MAN: Esoterics – The Supernatural – Magicians – Mind Control and the New World Order

Anonymous Judge Blows The Whistle: U.S. Is A Plantation And ‘We The People’ Are Slaves

TO WHOM IT MAY CONCERN…, GOD CAN’T BE “FOOLED”

Shall I post more?  There are hundreds more you know!  They ALL say the same thing!

You get the picture!

Take some time to read this – let it sink in – and then decide if you want to take on the REAL PROBLEM – which means taking out ALL OF IT – not just a tiny portion of it!

All my love, and stay tuned for part three…

FOR THE LORD GOD ALMIGHTY REIGNS