NOT SO DAMN FAST

HOLD THE PHONE PLEASE…, SPEED BUMP AHEAD…, DRIVE CAUTIOUSLY…, NOT SO FAST….

You know what the old saying says…, IF IT SOUNDS TOO GOOD TO BE TRUE…, then it probably is!

Here is just one of the many NEW YEARS “OMG” POSTINGS that are telling us our fairy god mother has arrived and waved her magic wand! 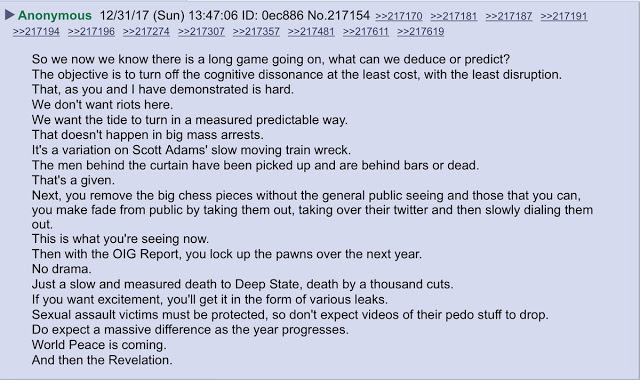 How convenient it is for those in power to “JUST TELL US”…, (sort of like a priest giving a sermon from a pulpit) that all of the “bad” people have now been picked up and are GONE!

Nothing to see here…, move along and go back to your life and do business as usual!

REALLY??  THATS WHAT YOU GUYS WANT??

All of humanity has been lied to for the better part of 100 years…, and we are now just supposed to BELIEVE that under the cover of darkness, in the middle of the night, and in ways that NO ONE can either prove or verify…, mommy and daddy “government” has taken care of the problem FOR US.

The common man needs a trustworthy representative with his two FEET ON THE GROUND who can watch and verify all of the proceedings, take notes…, see that it is all going down in real time…, and then REPORT BACK TO THE REST OF US DAILY!

In other words…, a HUGE CON!

I don’t believe for a mircro-second that those who “created” all of these horrible problems by using SECRECY and MIS-DIRECTION are suddenly at the outset of a “Brand New Year” going to be so squeaky clean that they will only use honesty from here on out!

These were most likely taken off of DW (David Wilcocks site) Divine Cosmos.

I don’t know about you…, but I’ve got a BIG PROBLEM WITH THIS STUFF!!!

Since they are all saying this person is a “she”…, I will go along with that assessment because I have never met (her).

However…, who in the hell does she think (she) is in giving us some of the absolute CRAP that she has given us…, while telling us it is the truth?

How does she know what she is telling us is the TRUTH?

MA: The elites who do this are the Illuminati types. Their actions may be more symbolic, like a communion.

It’s like a religion. People tend to do ceremonial things. It amounts to traditions and rituals.

Companies like Raytheon are also involved. People were making these maps, where all these companies engaged in child trafficking, organ harvesting.

ONLY ABOUT FIVE PERCENT ARE DOING THE WORST STUFF

MA: Some people think that everyone working in these networks are raping and murdering kids, drinking their blood. This is not true.

Within Pizzagate, from everybody who swipes a kid to everyone who murders a kid, drinks the blood and sells organs, maybe five percent total engage in the total process.

Other people are just contributing around it, directly or indirectly, just like drug trafficking. They may just be shuffling money around.

Some smugglers don’t do their own drugs, they just sell them. They don’t take the guns for themselves that they get.

They just sell them off in the street, or to the cops or whatever. They take the kids or coordinate.

MA: James Alefantis didn’t actually rape kids in the back room. It may have happened sometimes, but this wasn’t the norm.

It’s not like he was herding kids into a back room and auctioning them off. The business was just a front for money to come in and out of.

It wasn’t like a holding cell. Kids were dropped off individually and handed off.

They just launder the money, take the cuts, and do it under their business entity.

So many companies have no clue that the money they are investing is going into this.

If you have donated to the UN or the Red Cross, you could be just as liable, without even realizing it.

IF YOU READ BETWEEN THE LINES HERE…, THERE IS A LOT OF SHIT GOING ON.

(AND IF YOU DON’T READ BETWEEN THE LINES…, YOU ARE BEING CONNED…)

Almost all of this sounds to me like:  DAMAGE CONTROL

In other words…, “they” know they’ve been caught…, they know that many other people know about what they are doing…, so now the entire focus has to be on the APPEARANCE OF CLEANING IT UP.

The first thing that you have to do if you are going to give the appearance of cleaning something up…, is to make certain that people are TOLD (during damage control) that no matter how bad they think it is…, it was only a small percentage of people (tiny, tiny) that has actually done these things!

What did we just see Meganon doing?

THIS IS EXACTLY WHAT SHE DID!

She almost sounds like a public representative for these monsters themselves!

Is she the hidden face of DAMAGE CONTROL?

Because this is exactly how DAMAGE CONTROL IS DONE!

If we don’t at least ask this one single question…, we are being exceedingly gullible and quite stupid.

Every part of this (quite long) collection of statements that she (apparently) made to David Wilcock should be QUESTIONED and VERIFIED!

Check out this part….which in my opinion is absolutely DISPICABLE and OUTRAGEOUS!!

ONLY ABOUT FIVE PERCENT ARE DOING THE WORST STUFF…

Really Meganon…, you know what…, I don’t think the CABAL could buy a better DAMAGE CONTROL representative than the one that you are being at this very moment!

Because this conversation you had with DW sounds very much like you are a one woman “containment squad”…., and doing as much “damage control” for the big boys as you possible can!

Yea.., bad things happened…, but it was only a few that were doing it.  We’ve got to maintain perspective….

Hey MEGANON…, where does the CIA send their “Thank You” letter to for your willingness in  helping them out of this huge bind??

What’s even WORSE for me is the lame, (truly lame way) this information all seems to come out in the flow of this conversation.

Maybe it could have been “said better”…, but the OPTICS of the conversation STINK TO HIGH HEAVEN.

Here’s an example of what I’m talking about:

In other words:   These guys aren’t so bad…, they were just doing a business and earning a few extra dollars!

If I could reach my hand through the computer and slap the crap out of you…, I would!

Here’s more of reading between the lines of this conversation:

Oh…, well then…, as Steve Martin used to say…

It’s my fault for jumping to huge conclusions!

Let’s all give James Allifantis a ticker tape parade through TIMES SQUARE because he wasn’t (always) raping little kids…, he was only SELLING THEM and PIMPING THEM OUT TO OTHER PEOPLE…, and just collecting the money.

He’s just NOT that bad of a guy really….

The more that I read from this ridiculous phone conversation that you apparently had with David Wilcock…, the more SICK of a person you appear to be Meganon.

Because while he sits there (and takes every single thing that you say to him as gospel without even asking a single DAMN question about any of it) I would have been holding you ACCOUNTABLE for every single word that you were saying.

HE BELIEVES EVERY SINGLE THING THAT HE’S TOLD…, AND I DON’T!

What’s more…, he just doesn’t seem to ever be affected by anything DARK – EVIL – or SATANIC.  (I wonder why).

Once one gets rid of the SMOKE surrounding this phone conversation…, all it really seems to be is a:

YES…some really bad things are happening out there…, but only a tiny percentage of the people involved are really bad…, and countless others are only shades of light gray.

HEY MEGANON…, I’VE GOT A FEW QUESTIONS FOR YOU…

What the F**K kind of human beings are these men and women and WHY are they still breathing?

So…, this a good question for my READERS….

We are apparently being “TOLD”…, that it is all being cleaned up…, BEHIND THE SCENES AND IN SECRET!

But is it TRUE…, and how would we even know if it was NOT?

WHO IS VERIFYING THIS STUFF WITH FEET ON THE GROUND?

There will be much more of this kind of thing coming from me in the coming days!

I am not “buying into” the:

….it’s all being done behind the scenes and in secret crap!

I know who these people are…, and what they are capable of!

THEY HAVE LIED TO US FOR CENTURIES…, WHY WOULD THEY STOP NOW?

Pretending to clean up their act for a few months or years is easy for them to do!

Albert Pike says it all!

All that is necessary is that you shall IMAGINE that you understand what is really happening!

David Icke said it all…, it’s a PERCEPTION DECEPTION!

All my love to my readers….

PS to the MILITARY…, If you want to have an objective and unbiased TRUTH TELLER to watch the proceedings and give daily reports from GITMO…, then all you need to do is ask….

THIS SAYS IT ALL