After reading Part Two of this strange and “unintentional” series linked here for your convenience:

I have just one simple question for anyone who happens to stumble upon this article and it’s predecessor:

Take a long hard look at Part Two of this series, think about it deeply, and then ask yourself WHO would engage with these types of people I talked about in Part Two.

IF indeed the NAZI’S (admittedly intelligent men and women) figured out SPACE TRAVEL during World War II and ventured out into Space, just WHO do you think people like that would make contact with?

Let’s put it this way, WHO would want to make “contact” with them?

The NAZI’S were brutal!  They enslaved men and women to work in their factories during the war!  They shot people for tiny infractions of the rules, while using intimidation, force, blackmail, threats of bodily harm and coersion to get things done!

They are everything a human being should NEVER want to be!

Yet “they” were Earth’s “first” representatives out in SPACE!

They were a top down “Military Tyranny” that needed to succeed at all costs, and were willing to pay any price to achieve their goals.

Morals, ethics, limitations, meant NOTHING to them.

HOW DO WE EVEN BEGIN TO LOOK AT THIS?

We could start with the “so-called” Spiritual side of this equation (so called, because it is anything but spiritual) where you had men and women in the Vril and the Thule Societies in Germany trying to make contact with out of body “entities” using CHANNELING and SEANCES to bring forth secretive and high level “information”.

It has even been suggested that through Channeling, they were able to bring forth precise information on how to build a space craft!

I’m not certain that this is true, but if so, I highly doubt that it was ANGELS who were keenly interested in helping the Germans achieve SPACE TRAVEL – especially given the nature of their government and leadership at the time.

And, if we were going to “start” with the Spiritual side of things, then we’d also have to look deeply at the idea that people like Helena Blavatsky, Albert Pike, and other Freemasons (as well as various secret society members) were having a BIG influence on the way the NAZI’s were thinking at that time.

(They say that HITLER himself was very interested in Blavatsky’s teachings).

But, if we did look at this stuff, then we’d ALSO have to look at the idea that those men and women at the VERY TOP of the Freemasonic Structure here on Earth – Blavatsky, Pike, and others – were unabashed and unapologetic Luciferians!

Once again we’d have to ask the question –

If the NAZI’S were Earth’s first representatives out in SPACE, and they were a brutal – MILITARY SYTLE GOVERNMENT – and furthermore must add into the mix that they were being heavily influenced in their thinking by high-level Luciferian “teachings and concepts”…, then just WHO in God’s Universe do you think they would make “contact” with once they got out into space?

What kind of beings would want to do “business” with a group that used SLAVE LABOR to get things done, and had declared open WAR on most of the world?

Are you “seeing” the problem here?

Would it be safe to say that the very WORST that Earth had to offer in the way of human kind, was the first to get out there?

There is so much to talk about concerning what I’ve just out-lined above, a book (or ten) could be written!

I could spend a few months researching just this stuff, but then the “point” of this article would never get made, so let’s move on!

THE NAZI’S DID NOT LOSE THE WAR

If we are to believe the reconstructionist theories, and late additions to history that were HIDDEN from public scrutiny, then the most ADVANCED part of the German (the most highly classified part) escaped to Antarctica before the war ended, and there, they were able to complete their work unhindered while the rest of Germany, (and it’s people) were being bombed into oblivion by the Allies.

The saddest part to this NEW WRINKLE in history is that we find out that men like PRESCOTT BUSH (George HW Bush’s father) was in fact working with the NAZI’s through the Union Bank in New York.

You see, one would wonder how a German Science contingent working hard under the Ice in Antarctica could ever buy enough supplies and hardware to complete highly classifed work on Space Craft with NO MONEY after the War was lost.

Yet, it may indeed have been that there were people in AMERICA who had been supporting the NAZI’S the entire time!

It has been said that a single fuel additive that was crucial for aviation fuel at the time was only being made by STANDARD OIL!

The fact that the NAZI’S had a seemingly endless supply of this fuel additive (considering that they were fighting America) stops being puzzling once you realize that Prescott Bush (through Union Bank and various shell companies) was seeing to all of Germany’s War needs!

Furthermore, once you consider that the OSS (America’s precurser to the CIA) was heavily influenced by Prescott Bush, and even went so far as to “import” thousands of NAZI Scientists (and their families) into America after the war, (Operation Paper Clip) then you wonder just WHO was running America at that time, and why World War II was fought in the first place.

THERE ARE NAZIS AMONG US 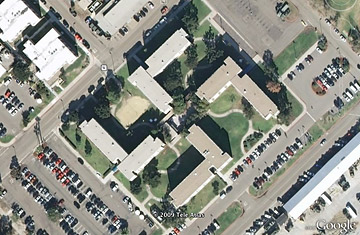 This building located on a Naval Base in San Diego says it all really!

Before we go “blaming” a large group of people represented by a SYMBOL and a FLAG, it would serve us well to start looking at the common threads that connect ALL such men and women who end up following NAZI – FASCIST – COMMUNIST – and all other radical forms of extremism!

Once you look under the Symbols and the Flags, the “names” and the “fronts”…, it always, always, always leads back to the Luciferians or the Satanists!

These people are like cockroaches that you just can’t kill!

Jay Parker claims that his own mother (who claims to be a Witch) and practices a version of Satanism that worships an out of body entity called THE MARQUE OF HELL, was a small part of a much larger ILLUMINATI structure that claims to run the entire world!

She also claims (according to Parker) to be descended from a group of people called the Amalekites!  Amalek was apparently a very real place in Ancient times.

Even GOD himself (according to the Bible) commanded that the  Amalekites be destroyed because they were vicious cannibals (they ate people) drank their blood and were practitioners of Magic!

But sadly, even if we started to go down THIS RABBIT HOLE, (again another five books worth) we would still not be answering the MAIN QUESTION of this post.

Who is it that is really BEHIND the first of our kind (most recently) to step out into SPACE?

If this is the case, and it does seem to be, then just WHO in GOD’s Universe would be doing BUSINESS with these men and women?

Is this not a question worth asking?

HERE IS WHERE COSMIC LAW KICKS IN

Whether here on Earth, or out there in the Galaxy, there are immutable LAWS called COSMIC LAWS (Natural Law if you listen to Mark Passio) which can not be broken and work everywhere at all times.

Or, here is an even more basic fundamental law that can’t be argued with:

The TRUTH of the matter here is that there really are NO BEINGS of a grand level of Spiritual Growth and Advancement who would be willing to work “with” these NAZI/LUCIFERIANS.

So this simple question, once again, and for the third time has to be asked:

Just who in God’s Universe would be willing to do BUSINESS with these types of men and women?

Those willing to “make friends” with the NAZI’s would be:

You know, by now, even the men of the SECRET SPACE PROGRAM must be wondering why they haven’t “met” more extremely “loving” and “enlightened” beings out there in the Galaxy.

They must be wondering why they have not been given access to the FAR MORE POWERFUL weapons and technology that extremely advanced civilizations have!!

If they are wondering this – then here are a few questions for them to ponder!

You see, the men and women of the SECRET SPACE PROGRAM wanted to be the “FIRST” out into SPACE in order to gain MORE knowlege, MORE information, and MORE technology so that THEY would be the FIRST (and only) ones to benefit from this, just to find that the beings they keep bumping into are (for the most part) “rogues” like they are.

If they do find races and beings of advanced intelligence and knowledge, they find they are being “treated” like little children and wonder why?

But then if they ever looked into the mirror (and were honest) they’d see that they were ACTING LIKE LITTLE CHILDREN! (Especially here on Earth).

Therefore, their “contact” with truly POWERFUL BEINGS – with SUPREMELY ADVANCED technology has been withheld.

They may be able to fly from here to another galaxy, and may even have “weapons” to defend themselves out there, but just WHO gave them these things?

Yea…, just the exact KIND of beings that you’d love to have over for dinner sometime! (If they don’t eat YOU first).

So.., am I just making too much sense here?

What really is going on out there in SPACE?

Bradley,
when I was reading part II I was remembered at the
“SS” beings of the Terra Papers.