OKAY – SO HOW MANY OF YOU ACTUALLY “WATCHED” THE YOUNGBLOOD VIDEO I POSTED??

I posted it for a good reason hoping that just like on the 8-Chan Boards, my readers would go through this video second by second and DECODE IT!

Okay…, I’m not going to do it all for you guys…, BUT…, I will get the ball rolling for you!

Here is the video again!

THIS MOVIE CAME OUT IN 1986 WHILE REAGAN WAS STILL PRESIDENT OF THE UNITED STATES and GEORGE BUSH SR. WAS HIS VICE PRESIDENT!

1) NOTICE THAT THE NAME OF THE SONG IS:  STAND IN THE FIRE! – (Which is a Hollywood reference to Satan’s Fire)

2) Notice at the very beginning of the vid…, the “actor” writes the word YOUNG BLOOD on his locker. Of course in the movie…, the characters name is “Youngblood”…, but the real message of the entire MOVIE is not about a hockey player but about YOUNG BLOOD!

3) Notice that as the video starts the song “Stand in the Fire” starts playing as a clue…, and two hockey players are getting ready for a “FACE OFF”!

4) Did you also notice the “hammer and sickle” in the title line of the vid hidden in the word RETROSPECTIVE ??

They turned the symbol to take the place of the “C” and the “T”. 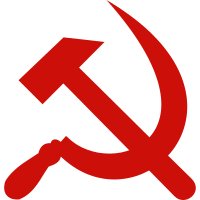 This is a communist SYMBOL.

5) At exactly 27 seconds into the vid (just after the “face off”) the opposing player gives YOUNGBLOOD a huge blow to the “face” and knocks him over in a very ABUSIVE MANNER.

7) At exactly 31 seconds into the video the word: CHROME is written on the side wall of the hockey rink…, which is exactly 4 seconds after Youngblood gets his blow to the face!  This is also the number that Youngblood is wearing on his jersey!

This is a direct reference to ADRENOCHROME – which is the entire reason for buying and selling of YOUNGBLOOD.

8) Youngblood gets up off the ice and touches his “eye” which has been wounded…, but this is a symbol that means you are supposed to be SEEING SOMETHING IN THE VIDEO.

9) As Youngblood gets up off of the ice…, the video cuts really fast to other players passing around the outer wall at 38 seconds, and one goes directly in front of the word: HAMMER! (Which is a reference to the Hammer and Sickle, which is reference to the Title Line of the Video).

10) At 41 seconds he passed by the word: TIMEX, which is also a reference to TIME.

I’ve done the first 41 seconds of the video for all of you!

Now…, I challenge you all to DO THE REST OF IT!

Post your findings in the comment section!  Let’s make it a contest to see how well you all do!

The song mentions Courage (coup rage) which is all about stoking the energy to create the brawl at the end of the clip. Of course they have the scene with sex where the girl is more aggressive ( I think she is probably transgender) she doesn’t have the nature of being female. And of course drink your liver into oblivion. They make it look so cool & fun…or they did in the the 80’s. This movie is about using the male energy that does well in sports, it’s a great way to channel that male “outer” energy, and mutating it into fighting. And the music makes my ears bleed it’s so awful.

OK. I am going to highlight three of the actors here.

Keanu Reeves went on to star in the Matrix series which basically (in code) exposed the nature of reality and urged one to take either the blue pill or the red pill.

Then we have Patrick Swayze who some time after this movie starred as a drag queen in : To Wong Foo Julie Nieumar. (here we have this macho screen idol and heartthrob putting on a dress in a gender bender role). This is a prelude to the wide-spread gender bender mind control in later Hollywood films and TV. I wonder if Patrick Swayze turned down any further movie roles which would have upset the carefully crafted agenda. So he had to be taught a lesson. Some “inconvenient people” who upset the Cabal mysteriously get a virulent cancer. Swayze died a painful death of pancreatic cancer.

This happened to Steve Jobs conveniently (for the Cabal) after he firmly refused to allow intelligence agencies to have a back-door hack into all Apple equipment. Similar fates befell Christopher Hitchens and Dominic Dunne who were brilliant men and outspoken critics of the establishment.

Then we have Rob Lowe who’s love interest in this film is this androgynous girl. (More of gender bending). Somehow Rob Lowe who at the time was at the height of his popularity was “involved” in a sex scandal (a damaging video) which for a time ruined his career. Robert Downey Jnr. went to prison on drug charges. He was a contemporary of these actors. Did he fall foul of the big agenda being crafted by Hollywood? I don’t know.

In any event all of this is total speculation on my part and I may be completely wrong about all of this. Makes you think doesn’t it?