Years ago…, I was told by an aquaintence that Alex Jones was Co-Intel Pro!

It looks like the verifiable proof of that assertion has finally come out in the form of a few drops from Q!

Some of my readers suggested this…, but as we’ve found out so many times with the followers of the NEW AGE…., “belief” in something is NOT necessarily PROOF of TRUTH.

Many New Agers have held “beliefs” that are not only incorrect…, but are downright SATANIC!

Thus…, I needed to be certain!

So here is Q’s drop: 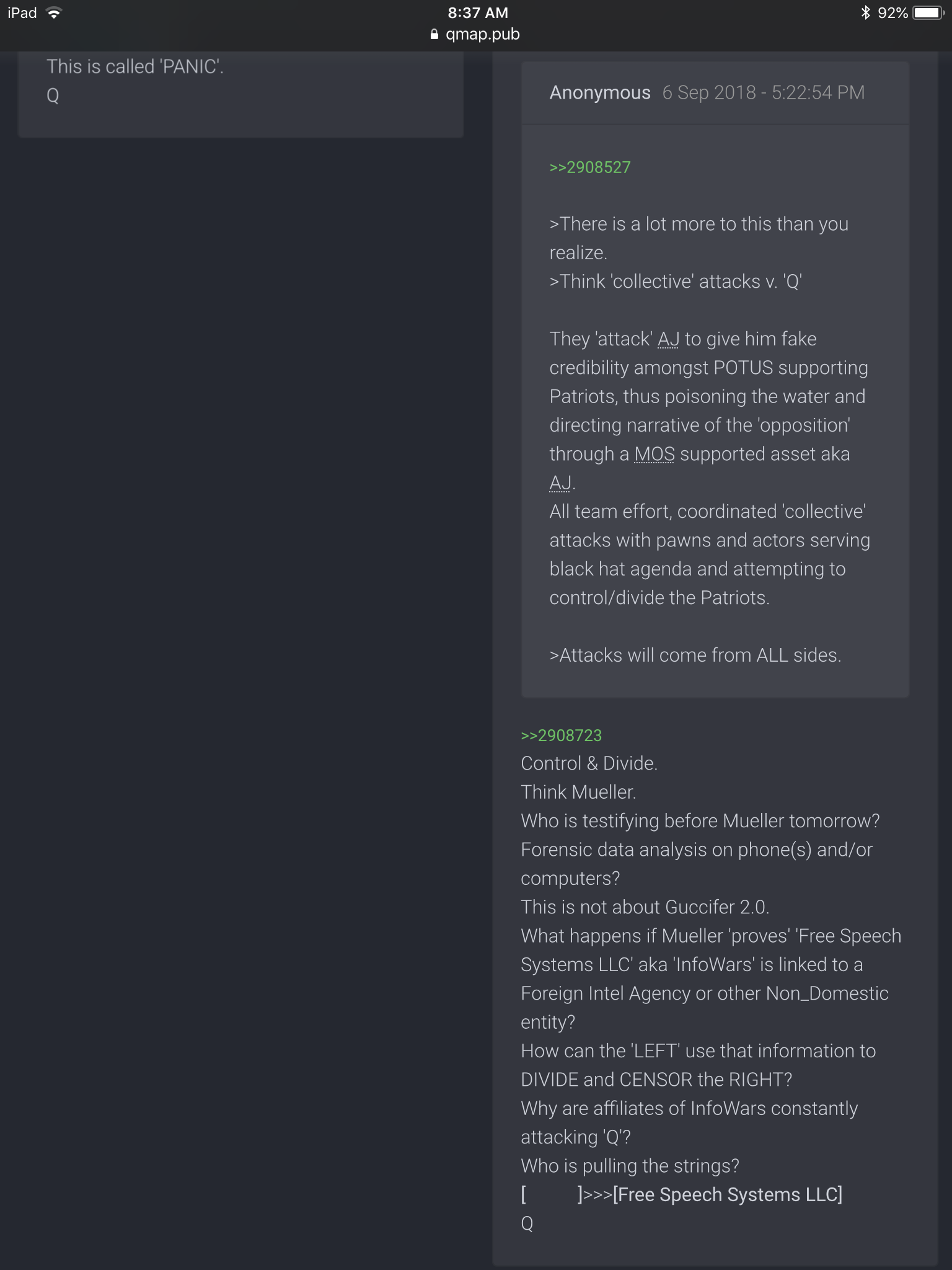 Sadly…, in this great game of CONS and COUNTER CONS…, it is a real challange to know who is actually telling the TRUTH!

Both sides – GOOD and EVIL – have “infiltrated” the other’s side and have operatives who are walking, talking, and acting AS IF…, they are on that side!

Alex Jones and Jerome Corsi would be two good examples (if what Q is saying is accurate).

The only purpose for DARK HATS to be pretending to be WHITE HATS is:

The purpose for WHITE HATS to pretend to be DARK HATS would be so that the DARK gets supremely over confident in its “assumed” control of unfolding events and at a critical moment in time…, to TURN what they thought was a guaranteed victory…, into a failure simply because several CRITICAL PEOPLE who they assumed were Dark…, were actually White Hats…, that were only “acting dark” and “doing bad things” just to TURN ON THE DARK at the most inopportune time when they needed them the most.

Needless to say…, HUMAN BEINGS were never this EVIL in the beginning.

Off worlders entered into our world (our game) and corrupted the GAME BOARD with tactics and behaviours that real human beings were NEVER equipped to deal with.

This is why they (those from outside) so easily came in and took over!

No one living on Earth was ready for these kinds of Draconian tactics because no one could have even imagined them!

There still is a GOD watching it all…, and COSMIC JUSTICE will prevail.

If you sell your soul for money and $…, then you can be assured that your SOUL will be taken down to the lower levels of creation…, this is a fact!

Eternity will not be plesant for these men and women!

PRESIDENT TRUMP NEEDS TO DISCLOSE THE TRUTH ABOUT 9-11

THE “CRIMINAL” SPEAKS… (Part One)

This is why we need to stop idolizing people in general. No one is ever 100% right all of the time. Great article. Thank you!

Bill Cooper was a True Patriot …..

Accurate. Though AJ’s heart and actions point out to be a good patriot.

Anyways, this is a good enough reason to put God’s Law above man made law and drain the swamp:
https://savetheworld1001.wordpress.com/2018/09/08/risk-of-30-correction-for-equity-indexes-especially-sp-500-gods-judgement/

Thank you for your article.

Dustin Nemos from https://www.dustinnemos.com/ made it very clear ( he was for years a follower of that shill Alex Jones…)

Corsi indeed is a Rockefeller, Mossad, and B’nai B’rith motherfucker… ( pardon me my French )