Q – ANON (My opinion after many weeks of watching)

Before we start…, I am going to give you two videos to watch!

First this one done by Jordan!

Then this one by Tracy Beanz…

Here is my OPINION.  (Based upon intuition only)

President Donald Trump is looking for a way to communicate directly with the public!

He does NOT own the Networks, and thus can never trust the Media to cover anything vital.  Also, he can not really TRUST Twitter, Google, Youtube, Facebook or any other Social Media Group because those belong to the GLOBALISTS.

However…, 8chan is a public posting board.

8chan can not be censored…, and if Trump needs to communicate directly with the people in an emergency way…, then certain people around him are building up Q Anon (who is actually a group of people) and 8 chan as one of many possible vehicles of doing this.

This would be used should he be cut off from any other way of getting his message out!

There have been many imposters trying to post as “Q”…, so this (apparently) is an ongoing battle.

So that is my current take (not etched in stone) about Q Anon.

I will update you if I gain MORE information! 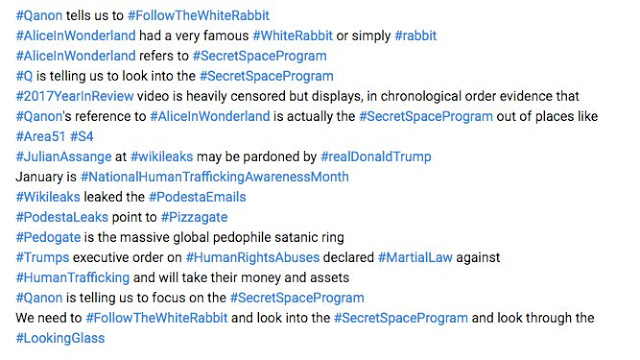 SO YOU THINK JUSTIN TIMBERLAKE ISN’T A GLOBALIST (??)

INSTRUCTIONS ON HOW TO USE MY BLOG

Somewhere in the text it sais :
“This should be gotten to someone with reach so it can be spread. Liz or Jordan or Lionel or SGT Report should take this and run with it, so if you have access to some one, get this to them and let them break it.”

Passed it on to Jordan also..