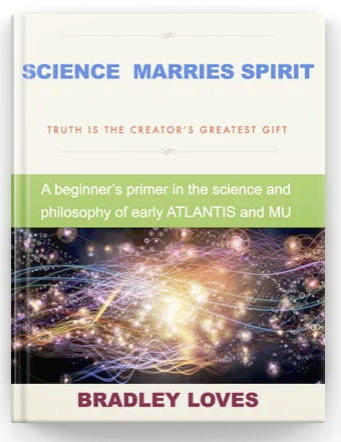 Originally, back in 2004, the working title of the book was:

MOTION, MAGNETISM, AND THE POWERS OF THOUGHT, LOVE, AND INTENT BEING USED WITHIN THE CONFINES OF THE  UNIVERSAL ELECTRA

However, after a bit of personal reflection that “title” seemed like it was a bit much.  I subsequently changed it to “SCIENCE MARRIES SPIRIT” when the book was finally completed simply because I wanted to show people that the “Ancients” did not consider Science and Spirituality to be two separate things, but instead they considered Science to be the highest form of Spirituality in that it was the search for real knowledge and ultimate TRUTH.


Of course, the problem we have today is that “science” does not tell us any “truth” at all.  Today’s science is a bought and paid for “circus side show” of rich men’s foundations – and thus is devoid of any sense of spirituality whatsoever.  Today’s science is nothing but the punch line of a bad joke.

When TRUTH is omitted from Science – then it becomes ILLUSION – and a fabricated form of WIZARDRY.  Today’s science has nothing to do with “Spirit”, and therefore it cannot even accurately be called “Science”.

You may remember that for most of my life I earned my living as a “carpenter” and simply built things for a living.

Builders are fascinating people because builders can visualize and imagine things that are not yet created or revealed – and view them in their mind as fully done and complete!  It is this talent which allows someone like me – a builder – to realize and to understand that today’s “science” was “lying its ass off” to WE THE PEOPLE – and was feeding us all a line of total garbage as far as what was possible, and what was going on out there in the world.

Since I was just a carpenter – and could figure out many of the countless things that modern day scientists were lying to us about – I learned to LOATH these despicable men and women who – for a “paycheck” – and for a nice life, were selling the rest of us in America out and into the gutter!

This should not have been happening, and I decided to do something about it.  I began to write!

I began to write having no background in writing and barely being able to type.  I wrote many things in those days, usually after work and on the weekends.  I also spent a lot of time doing research. Those were better days for me, and I was certain that many of the things I was writing would eventually be published!  I was certain that the world would eventually see the things I was writing.


Sadly, many of the things that I wrote in those days will never be seen!  They will never be seen because they were STOLEN from me by rogue agents who raided my home in 2013, and took absolutely EVERYTHING that I had ever written or created.  Boxes full of things were carted away from my home – never before seen books on science and original music that I had written – which can never be duplicated or replaced.  PRICELESS THINGS.

After the raid, the raiding agents giggled when they told me:   “Barack Obama says hello”

Just one lone book survives from those early days and it was actually the very first one.  I had given a digital copy to a friend – who returned it to me.  Check it out.  It has lots of useful information in it, and as you can see, my opinion on many things has not changed!

If you are “Science Minded” – and by that I mean “Open Minded” – you may just find this 17 year old book fascinating!

You may now understand why the very NEXT THING that I wrote – in 2014 – was this:

It was written because I realized that there were powerful forces, using extremely advanced resources, to do very bad things to innocent people!  This REMOVAL OF CONSENT stands at the Throne of the Creator as witness AND as testimony against every living being who has come against me.

NOTICE WAS GIVEN to just “leave me alone” and those who slink and sloth around the world “following orders” and “plotting hidden agendas” will rue the day they were ever born here on the Earth.


GOD will see to it!

Remember this – I KNOW a thing or two about how reality gets created!  Life does not “end” after we leave here.  Nor does our “claims” against others end!

Anyway – that is just a tiny part of the history – and if you are interested, I hope you’ll look into SCIENCE MARRIES SPIRIT.  Maybe you can figure out what the “agents” were looking for when they took everything I’d ever written.

Here is a direct link to Apple where you can buy it as an e-book.

USE YOUR “TIME” DIFFERENTLY TODAY – STUDY AND LEARN

TIME-LINES – CHAOS THEORY – and the DIABOLICAL