THIS IS A MUST READ BASED UPON WHAT WE HAVE SEEN IN THE LAST FEW DAYS!

Blessed are they who have learned that the TRUTH is the only path.

For centuries, Secret Societies have worked very hard to decieve all of mankind!  Unless you were part of their “club” – then lying to you was a “sacred” commitment.

What a SICK – SICK man this is!   To think somehow that TRUTH can not be just “told” openly to all mankind – demonstrates acute mental illness!  This man, with all his ribbons, medals and bow is truly SICK!

Deranged, and infinately unwell…, his book MORALS and DOGMA has been spread far and wide as some sort of blueprint or roadmap on how to deal with life and the world!

And yet.., his ideas have cursed and very literally DESTROYED our world!

OUR WORLD AS IT IS…

Our world, as it looks today, was BORN out of the lying lips of deception!  Our world could not look like it does – if only the TRUTH had always been told to everyone!

The FREEMASONS – who claim to want to make the world a “better place” seemingly haven’t got a clue as to what makes the world better!

I say seemingly – because after seeing their pattern of lying and decieving…, it is all too obvious that those at the very top levels DO NOT want a better world at all.

If I – a carpenter – for crying out loud, can chart the slow descent of the entire world into chaos as a result of lies and deceptions…, THEN THEY CAN TOO!

So, with this information, one must conclude that they WANT THE WORLD WE LIVE IN DESTROYED!

There is no other logical conclusion to draw!

How did deception work for Hitler and the Nazi’s?

Gobbels (like Pike) thought that LYING was the only way to run Government and Control the people!

Why don’t you just ask any German who was alive during World War II, and living inside Germany!

That country was BOMBED day and night by the Allies until Germany surrendered!

Now…, we’ve got the SAME THING HAPPENING HERE IN AMERICA!

Hey…, Cooper…, Gobbels would be proud!

Why does the ANTIFA FLAG look almost exactly like the NAZI FLAG??

Could it be that the very same people who  “financed” the NAZI’s are now financing ANTIFA as well?

This is not difficult to see!

So why are so many people falling for it?

Americans can no longer tell if they are being LIED to!  In fact, they have lived a very long time in a cesspool of lies.

At this point, people are falling for the cons and lies of those who started World War II – and are looking to do it again with a World War III.

The only people who seem to be able to “see” what is happening around us have fallen for their own VERSION of  lies and deceptions…, and so they say nothing!

Even though many loving people are more “awakened” than those who are doing violence in the streets, they have equally been decieved by CHANNELERS and CHANNELED ENTITIES!

The “propaganda” is still being “fed” to them…, only it is coming through a different funnel.

WHY THEY ALLOW THEMSELVES TO BE FOOLED

Few people living here on Earth have a clue as to how “high up” this massive CONTROL STRUCTURE that has taken over our planet really goes!

It definately goes up into the ASTRAL LEVELS!

This means that there are countless “out of body” entites and beings who are working FOR THE DARK SIDE!

NEW AGERS REFUSE TO TAKE THIS INTO CONSIDERATION!

Not only do followers of Channelers and Channeled Messages refuse this OUTRIGHT…, they demonize and criticise anyone who asks them to LOOK DEEPER!

They actually try to “blacklist” and “shadow ban” their peers (also very spiritual people) who have a point of view that differs from their own.

They REFUSE to reprint articles or link to them on their blogs if they have a different point of view…, THUS doing the exact same thing that TWITTER – YOUTUBE – GOOGLE – and FACEBOOK are doing to “conservatives”.

Long before YOUTUBE banned access to it’s platform for conservatives…, NEW AGE BLOGGERS and WEB PAGE owners were basically banning ANYONE who had a different take on CHANNELERS and CHANNELED ENTITIES from their own blogs and web pages!

The “GO AHEAD” to start “banning people” and their alternative point of views started with the “spiritual people” FIRST!

I dare ANYONE who is part of the NEW AGE MOVEMENT to tell me I’m wrong about this…..!

I’ve already “named” a particular website (and it’s owner) who DID the very same thing that YOUTUBE is doing now…, and “he” runs a so-called spiritual website!

Anyone who said Barack Obama is NOT who he says he is…, and is NOT the Savior of the world…, got the BAN and the BOOT from his website!

Instead of investigating both points of view…, there was ONLY ONE POINT OF VIEW…

That point of view was this:

CHANNELERS CAN NEVER BE WRONG – AND THEY ALWAYS TELL THE TRUTH!

Well, what could the Satanists do with a ridiculous attitude like that?

THEY DID YOU KNOW!

Jirka Rysavy and Drunvelo Melchizadek have both made the claim that they occasionally CHANNEL LUCIFER!

David Wilcock is currently living in a NIGHTMARE because he would not consider MY POINT OF VIEW!

Both Shane Bales and myself were talking on SKYPE at the very same time that he (Wilcock) was choosing sides, and bringing Corey Goode under his wing!

Shane had been introduced to David and had communicated with him several times.

Instead of opening up a larger discussion about DEEPER ISSUES…, (whether or not Channeling was even valid) he stopped talking to Shane (aka THE RUINER) and basically shut him out!

Had he investigated what good people (like Shane and myself) had to say…, Wilcock would NOT be in this huge mess today!  He would have been able to side step the TRAP he finds himself in.

GOD WAS WATCHING!  HE SEES IT WHEN PEOPLE WHO CALL THEMSELVES “SPIRITUAL” – CUT OFF AND CUT OUT PEOPLE OF GOOD INTENTIONS WHO MAY TRY TO WARN THEM OF TRAPS.

This is the “I’m better than you EGO” at work…, and once a man or woman gets so full of themselves that they don’t want to talk to “certain people” or consider other points of view – then GOD HIMSELF makes certain that a “fall” is not far away!

Corey Goode (who could not be bothered to talk to me even one time) is not far behind Wilcock in this “great fall” – and trust me – many people (including me) KNEW Jirka Rysavy was a wolf in sheeps clothing long before Wilcock and company signed up with GIAM TV.

Both Goode and Wilcock will be shown that if you CLAIM to be spiritual…, then you must ACT like it and be humble enough to talk to people of all kinds, and not just “rub elbows” with those you think can help you “financially”!

THIS IS A HUGE LESSON TO LEARN…, and WILCOCK AND GOODE ARE GETTING IT IN SPADES!

What does this have to do with my original thought?

It’s the BACK TO KINDERGARTEN lesson of primary importance:

Blessed are they who have learned that the TRUTH is the ONLY path!

Secrets – Secret Societies – and Secret Clubs are BAD NEWS…, and will lead to destruction EVERY SINGLE TIME! 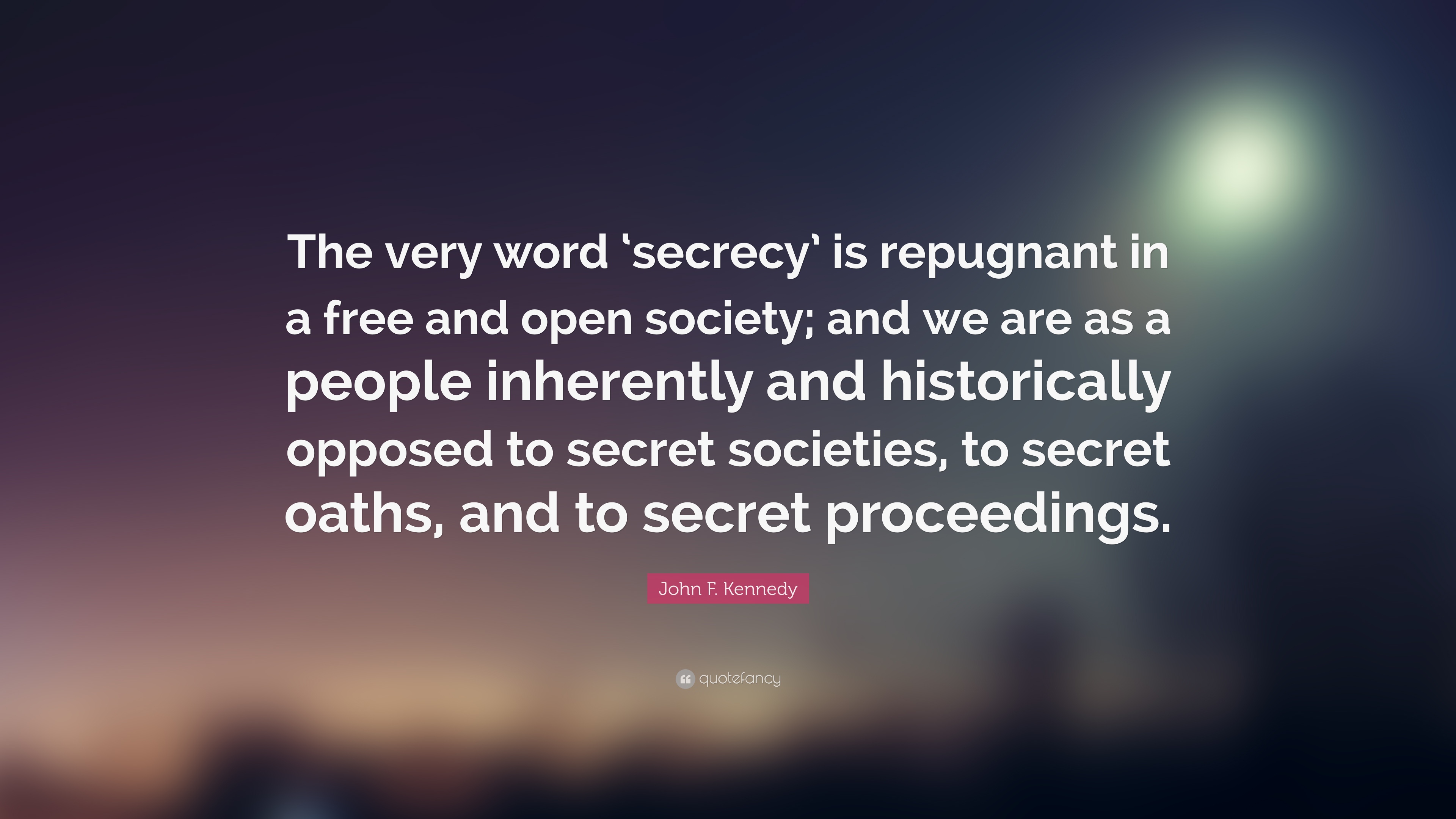 NEVER BEFORE IN HISTORY

THE STILL REPORT – THE “PERFORMANCE” OF CHRISTINE FORD