STATE OF THE NATION – WHY MILITARY TRIBUNALS ARE NECESSARY

MILITARY TRIBUNALS: Why They Are Absolutely Necessary

MILITARY TRIBUNALS – WHY ARE THEY ABSOLUTELY NECESSARY ?

Especially to prosecute the Deep State criminals, rogue Intel agents and Shadow Government perps who are executing the soft coup against the POTUS.

Because the traitors practically own and operate the U.S. Criminal Justice System, that’s why! 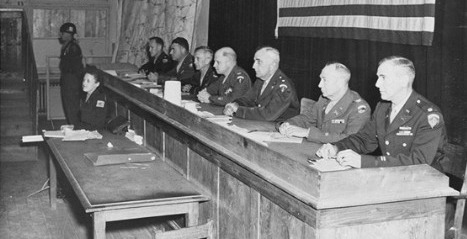 The political reality throughout the USA is that the legal profession is overwhelmingly populated by card-carrying Democrats, liberal lawyers, progressive corporate attorneys, activist judges and left-wing DAs.

All those fancy law degrees from Harvard, Yale, Princeton, Stanford, Columbia, Georgetown, Cornell, etc. are conferred upon mostly left-leaning JDs. They are a vastly self-serving lot who stay staunch Democrats their entire life. Many will never leave their major metro area even a single time…except to fly to another metropolitan airport (e.g. NYC to LAX).

Many of these self-proclaimed advocates get into the biz as a way of pushing their personal agendas, as they also promote an overarching and socially destructive liberal platform. The Philadelphia lawyers and New York City attorneys are, in actuality, the muscle employed by the hidden leaders of cultural marxism.

The U.S. Criminal Justice System is dominated by Democratic operatives at every level within most of the major urban jurisdictions. These best and worst legal counselors among them know exactly how to manipulate the judicial machinery to advance the liberal agenda. And they do so with a vengeance.

Ever since Trump has been POTUS, the nation has witnessed the many ways that the Courts have been used to shut down his various initiatives. The ultra-liberal attorneys routinely collude with the activist judiciary to terminate any presidential order or directive that can be overturned.

Because of this ever-worsening predicament, Trump has had his hands tied to a great degree. The resulting governmental paralysis has left the president with no choice but to apprehend the coup plotters who are guilty of outright sedition. Most of these agents of Deep State are committing acts of treason simply because of their political ideology. Other are coerced via bribery and blackmail by their Shadow Government masters (e.g. extortion via Pedogate crimes).

In view of President Trump’s plight, he has no choice but to prosecute the perpetraitors under the Uniform Code of Military Justice (UCMJ). Only in this way can the Commander-in-Chief of the U.S. Armed Forces be assured that justice will be administered, free from judicial sabotage, legal legerdemain and political interference.

Once the UCMJ legal framework has been adopted, military tribunals can be established to prosecute the numerous traitors throughout Deep State. That they all be apprehended expeditiously and simultaneously is critical to the success of this strategy. The longer they are free to make mischief, the more dangerous it becomes for the POTUS, his political allies and the leaders of patriot movement.

In light of the critical stage of this ongoing coup d’état, it’s especially imperative that the insurrectionists be incarcerated at Guantanamo Bay Detention Center—post haste! In this way, they can be securely imprisoned at great distance from those who would aid their escape. Most importantly, the insurgents can be efficiently moved through the military tribunal process so that justice can be served fairly and swiftly.

KEY POINT: The civilian criminal justice system would see these cases intentionally tied up in the courts for years on end. In this manner, justice
would be continually deferred or subverted altogether through liberal legal gymnastics.

The response to an attempted overthrow of a sitting president falls squarely within the domain of the U.S. Armed Forces. For this and other significant reasons, military tribunals must be constituted with all deliberate speed. The more quickly the criminal prosecutions can be conducted, the sooner the prodigious body of hard evidence proving guilt of treason and sedition can be made available to the concerned public.

Crimes must be prosecuted to the fullest extent of the law

The American people deserve nothing less than a complete airing of the many serious crimes which have been committed by countless political leaders and government officials. In point of fact, the ongoing crime spree carried out to advance the soft coup against the POTUS represents only a fraction of the transgressions by “Deep State criminals, rogue Intel & SS agents and Shadow Government perps”.

See the rest of the article here:

MILITARY TRIBUNALS: Why They Are Absolutely Necessary

UP TO THE MINUTE: ALEX JONES TALKS ON-GOING CENSORSHIP