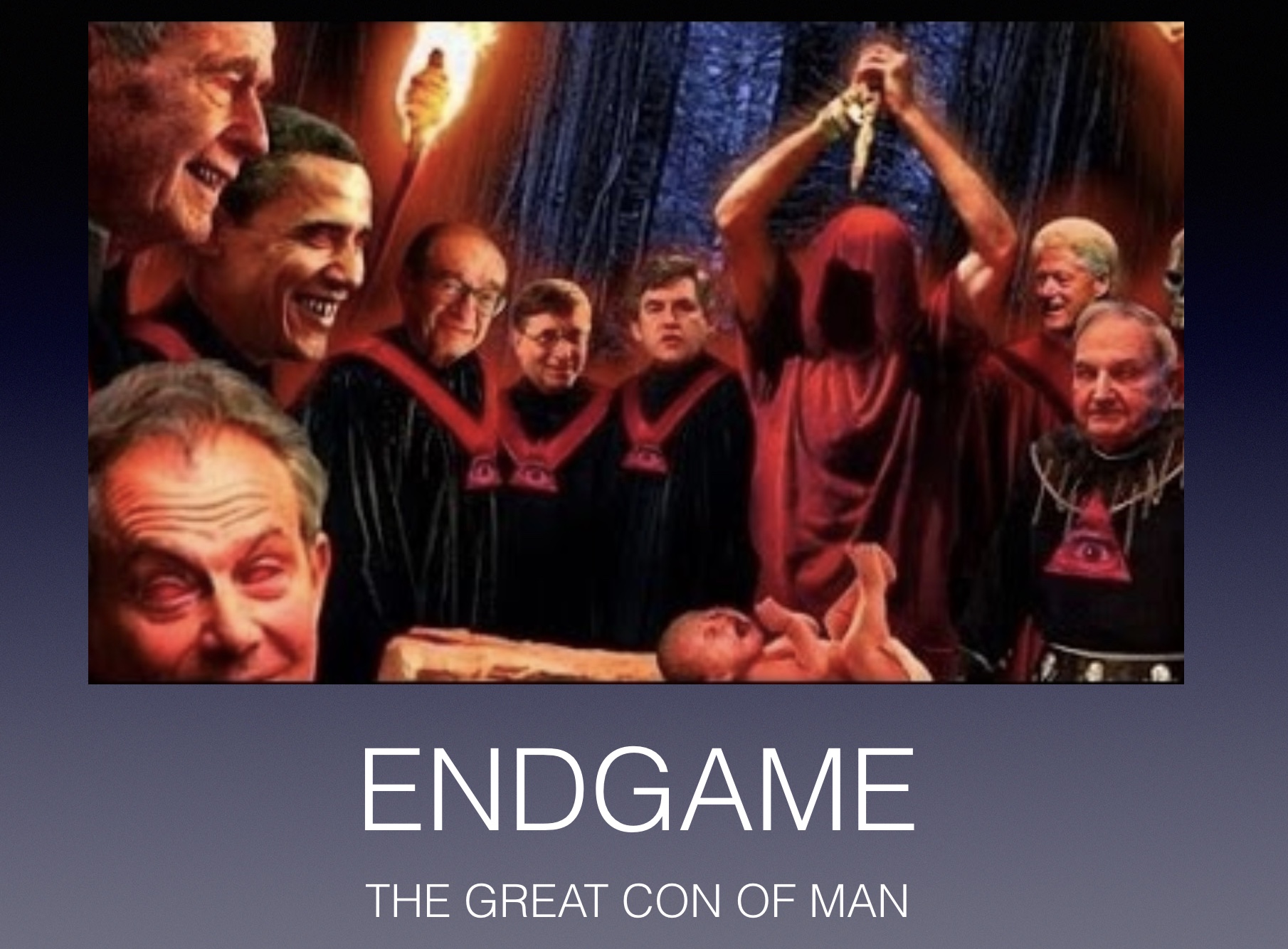 This new series is eventually going to be 17 parts!  It is actually a continuation of another 17 part series that I wrote called:  THE GREAT CON OF MAN – THE ENDGAME!

However, the title is now reversed.  If you want to get deeply into “Dark Magic Speak”…, it is MIRRORED!

You see, the first series that I wrote was written BEFORE the great PLANDEMIC of 2020! This second series is being written AFTER the great plandemic – and thus it is POST plan-demonic, and must now carry all of the information in a MIRRORED FASHION!

Every single great Magician uses MIRRORS to tell their stories, and therefore, you can only see the actual truth of a thing after you’ve looked at it through a MIRROR! 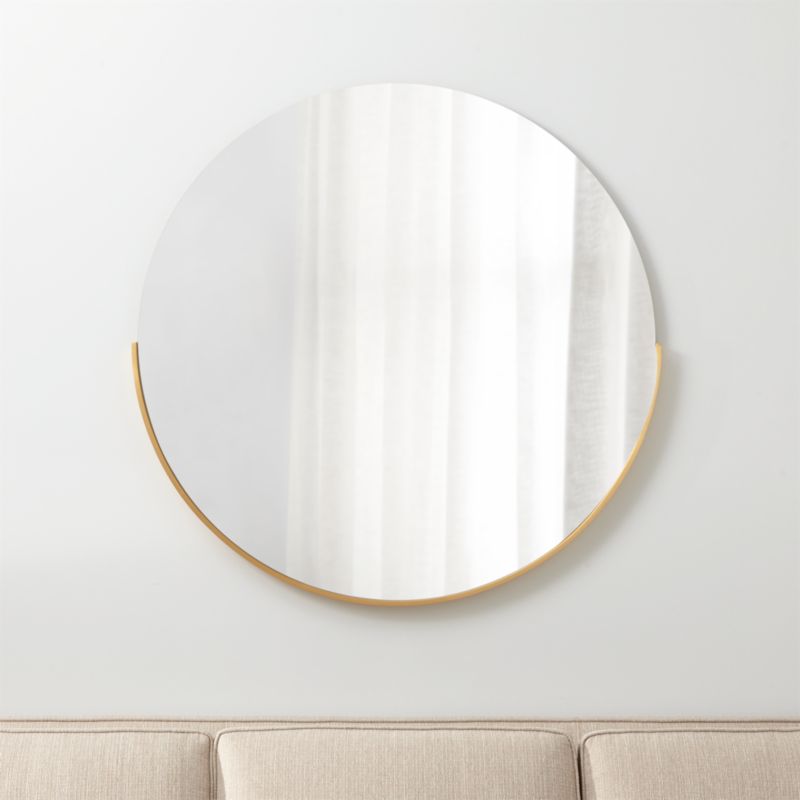 What I am really saying here is – who knows WHAT you can see when you look at everything once reflected by a MIRROR! 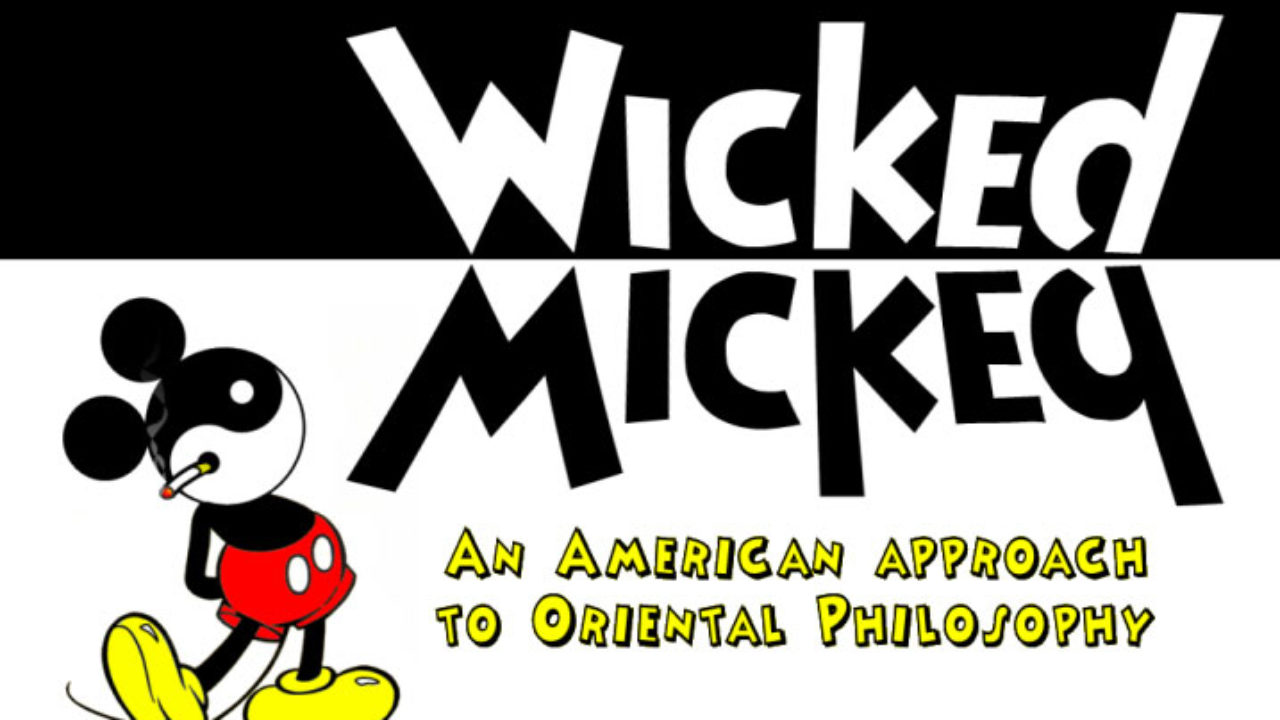 That is why they say:

What they really should be saying is:  MIRRORED SIGHT IS 2020, not Hindsight!

Of particular interest to me – knowing what I know – is that Bernie Sanders used this phrase as one of his main Presidential Campaign Slogans! 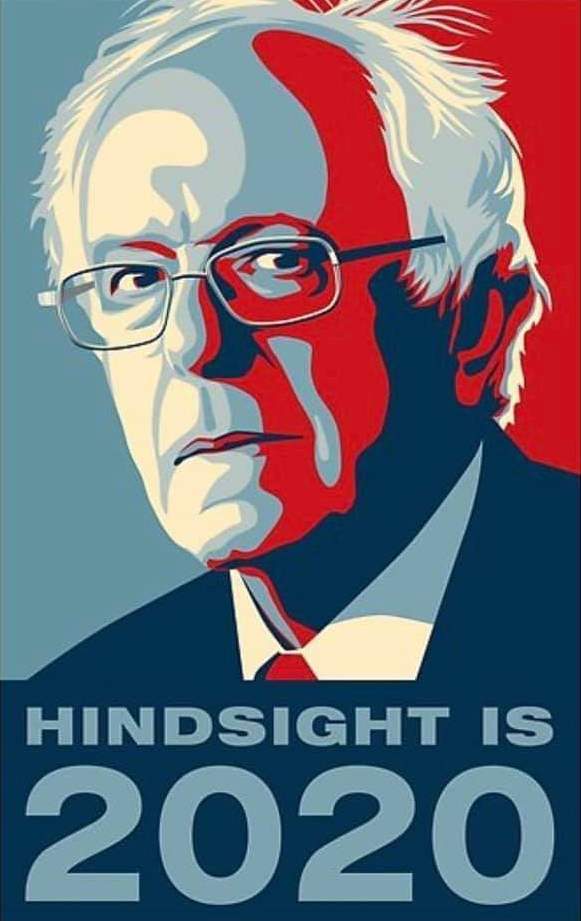 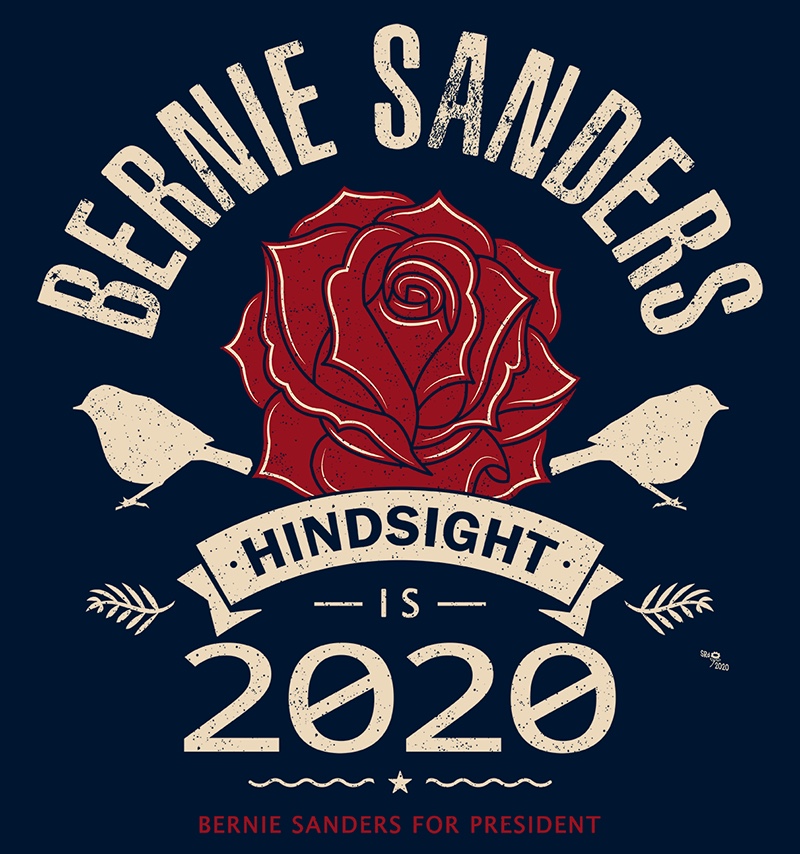 We all know Bernie was a huge Socialist if not an outright Communist!

And, doesn’t this strange type of “co-incidence” just give you some pause!  Notice the huge RED ROSE located in the middle of the image, with two white doves facing east and west!  Could it be that the ROSE is the symbol for a ROSE-BUD, and the two white Doves are actually WHITE DOV’S – aka White Dragons!

Ultimately, all I am doing is calling your attention to the deeper meaning of things and in order to LOOK DEEPER – in many cases – you must use a MIRROR!

Now that we are post PLAN-DEMONIC, absolutely everything has got to be looked at in a MIRROR to see what it really meant, what really happened, and “WHO” benefits!

Firstly, we’ve got to listen to this woman – who is a Doctor and a virologist who got thrown in Jail for exposing the antics of the CDC, BIG Pharma, and Dr. Fauci!

See this video called:  Plandemic – located on Bitchute because Youtube has banned it!

Then we’ve got to look at the antics of people on the inside – aka the GLOBALISTS and those “STATES” that serve them like China!

First, it is of interest to note that many of our Meat Packing Plants here in America – which are vital to our National Security are now OWNED BY  CHINA.

This article, by the AMERICAN THINKER – tells us that large numbers of workers from a huge meat packing plant in Sioux Falls South Dakota only contracted the Corona Virus AFTER being visited by a contingent of owners and investors from China!

How China is buying up America’s food supply

A Sioux Falls meatpacking plant was forced to close when it became the epicenter of COVID-19 in South Dakota.  Three weeks after executives from its Chinese owner, WH Group, visited the plant, a month after President Trump’s ban on travel from China, nearly 600 of Smithfield Foods’ 3,700 employees tested positive for the virus, as have 135 additional people in close contact with employees.

Smithfield Foods was started in 1936 by a family in Virginia.  Today, the Chinese own Armour and the famous Smithfield hams, together with the most quintessential American brand of all: Nathan’s Famous hot dogs, with its iconic annual eating contest.

In 2013, Smithfield Foods was bought by the Shanghui Group, later rebranded as the WH Group, for $4.7 billion.  It remains the largest total acquisition of a U.S. company by the Chinese.  With that purchase, the Chinese owned one in four pigs raised in the U.S. and, by adding 146,000 acres, continued to be the world’s largest buyer of American farmland.

The purchase was underwritten with a $4-billion Bank of China loan facilitated by the Chinese Communist Party.  The deal was an integral part of the CCP’s 2011 five-year plan to improve the Chinese economy with purchases of overseas farmland and food processing companies.  Food is poised to become the oil of the 21st century, with demand increasing for a scarce resource.  The CCP identified meat processing as a strategically important industry, and, with the Smithfield acquisition, China gained access to the world’s most advanced animal processing technology.  Former Smithfield CEO Larry Pope said, “In many respects, this is carrying out the (Chinese) government’s five-year plan, which is to improve the quality and the security of their food supply.”

The Chinese consume half of the world’s pork production.  Pork supply is so important to them that, just as the U.S. government maintains a strategic oil reserve, China stashes away vast amounts of frozen pork in case of shortages, outbreaks of swine disease, or war.  Smithfield has retooled to give greater focus to the China market.  “Down the road, if this continues and we ship a lot of product to China, certainly I think we (in America) could see shortages, particularly on hams and bellies,” admitted Smithfield’s director of procurement.

Here is why you should care.

For decades, China has been fighting a stealth war against us with the objective of replacing America as the dominant world power. “The removal of the United States as what they call the hegemon is the most important thing” to them, according to China expert Michael Pillsbury.

The Chinese would prefer to win a 21st-century war involving acquisitions of strategic industries like food and communications over a traditional military conflict.

In an article in the Atlantic, H.R. McMaster, President Trump’s former national security adviser, notes that Chinese president Xi Jinping told Trump in 2017 that the CCP is relentlessly pursuing the “great rejuvenation of the Chinese nation” —  the “China dream.”  McMaster relates a conversation with Li Keqiang, who indicates that the U.S. role in the future global economy will be “to provide China with raw materials, agricultural products, and energy to fuel its production of the world’s cutting-edge industrial and consumer products.”

According to McMaster, China’s leaders believe they have a narrow window of opportunity to revise the international order in their favor before other countries realize that the party is pursuing national rejuvenation at their expense.

Our response to the coronavirus pandemic has been severely impacted by Chinese control over the manufacturing of strategic pharmaceuticals and essential personal protective equipment — masks, surgical gowns, and gloves.  This should be the shot across our bow.  The Smithfield story is another reminder that Beijing’s economic grab is strategic and goes far beyond drugs and medical supplies.  Chinese ownership of our essential food producers generates a similar vulnerability to our national security.

It’s time to counter the “China dream” with an American wakeup call.  The alarm is ringing.

Ziva Dahl is a senior fellow with the news and public policy group Haym Salomon Center.

A Sioux Falls meatpacking plant was forced to close when it became the epicenter of COVID-19 in South Dakota.  Three weeks after executives from its Chinese owner, WH Group, visited the plant, a month after President Trump’s ban on travel from China, nearly 600 of Smithfield Foods’ 3,700 employees tested positive for the virus, as have 135 additional people in close contact with employees.

Today, Q-Anon is posting heavily, and is telling us that Senator Diane Feinstein is a direct link – BACK CHANNEL – to the Communist Chinese Government! 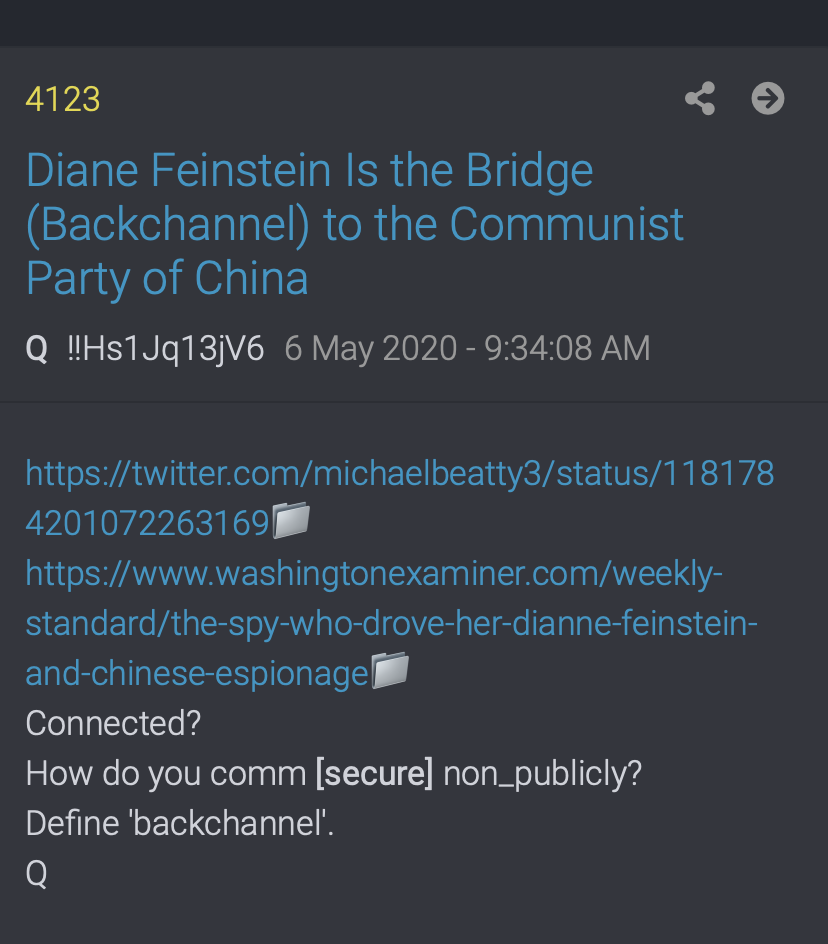 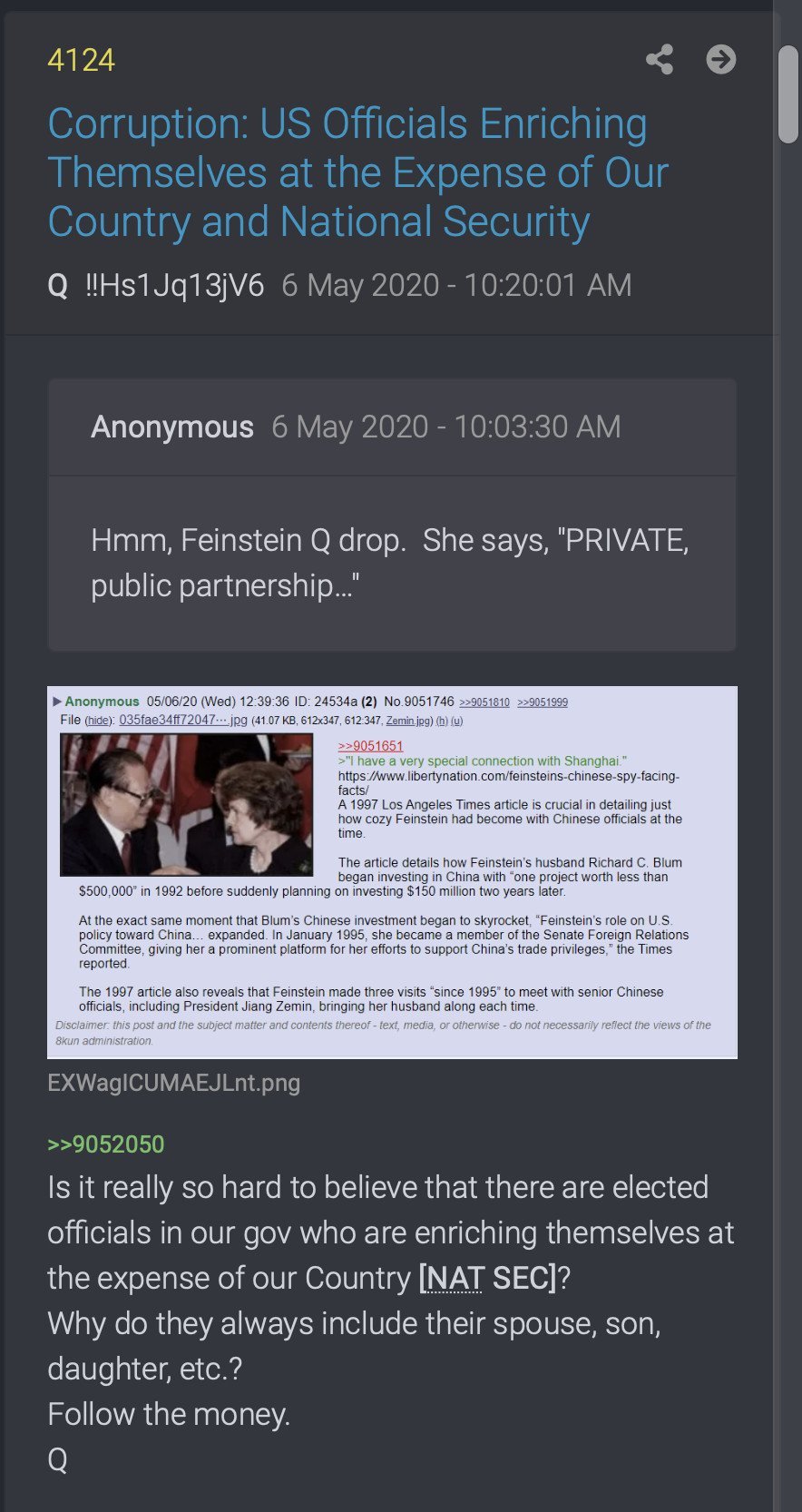 Ultimately, it is my opinion that behind and backing the CHINESE REGIME – are the bulk of the Globalists – aka Satanist/Luciferians – who believe that their last best hope of a NEW WORLD ORDER and complete GLOBAL DOMINATION over humanity comes from direction of CHINA – only because China does not have any positive view of Human Rights – Civil Rights – or a Bill of Rights!

At this late stage of the game, the Globalists see an immediate need to side step this last huge problem of human rights in order to quickly compel – force – and condition the populations of the world to give in and to consent to their New World Order Agenda!

This is why CHINA – with the help of GOOGLE/FACEBOOK and Big Tech – has created THE SOCIAL CREDIT SCORE SYSTEM – which includes facial recognition tracking and the monitoring of the movements around the country of every single one of their people!

As we speak, the Globalists are DESPERATE to bring this tracking and monitoring system into America – and into the rest of the world! 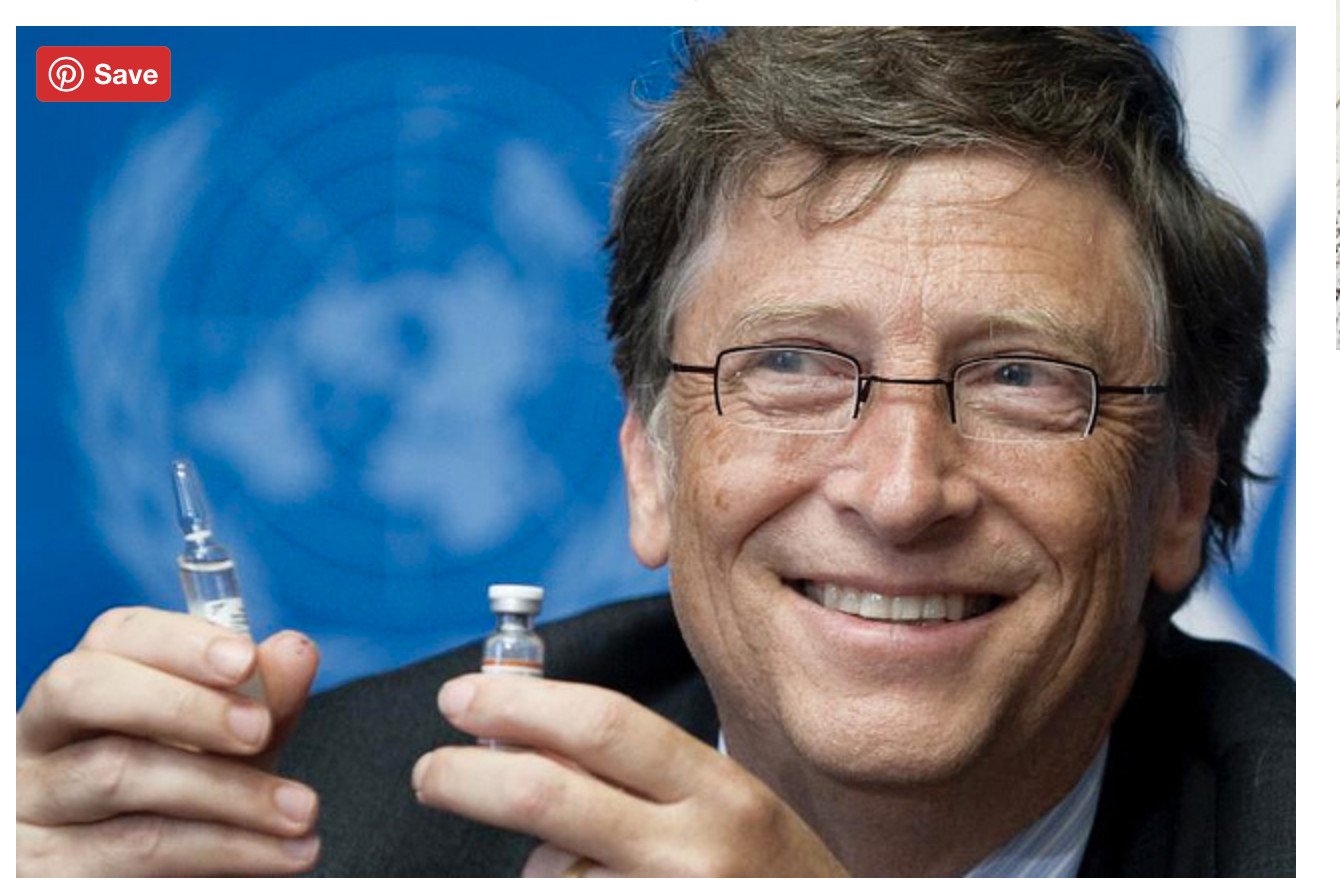 Bill Gates, Dr. Anthony Fauci, the CDC, The WHO, for years have been hard at work  hammering out the details of just how they were going to get everyone on the planet VACCINATED with a cocktail that would literally cause them to be micro-chipped and trackable by Satellite from Orbit or locatable by the GWEN – Ground Wave Emergency Network!

Total Global Control means knowing where every man, woman, and child is at ALL TIMES and what they are doing!

Huge Super Computers were needed to help with this type of tracking system, which is why AI – Artificial Intelligence needed to be directly involved and is something that Google was hard at work on in their labs!

This is why GOOGLE has revealed that it has now built a QUANTUM SUPER COMPUTER capable of doing calculations that would take normal super computers thousands of years to do – or capable of tracking every man, woman and child in the world at the same time! 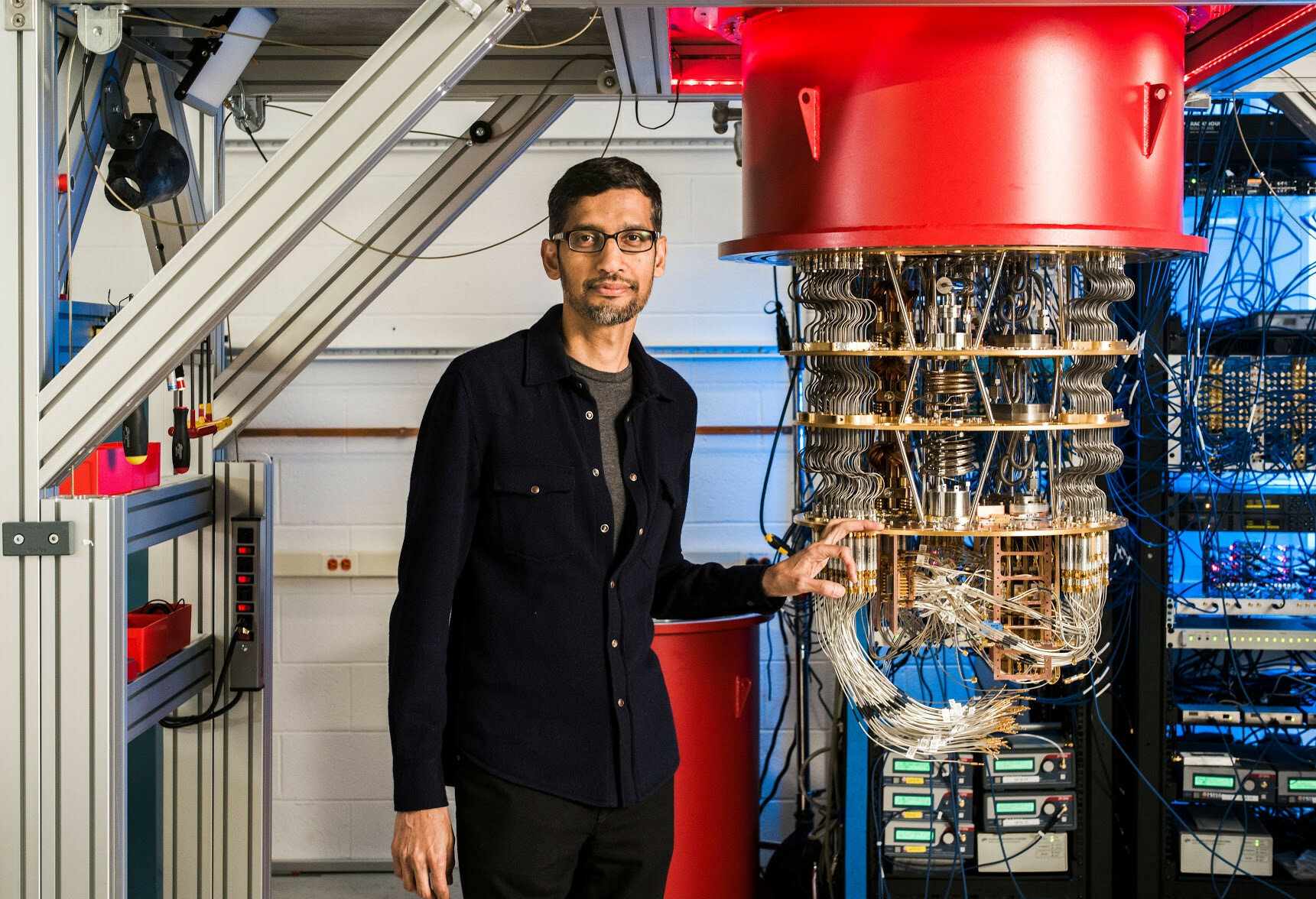 AI – THE NEXT AND FINAL STEP IN MIND CONTROL

The only thing that was missing was a way for the Google QUANTUM COMPUTER to interface with – aka TRACK everyone on the planet – and that is where Dr. Fauci – Bill Gates and the PLAN – DEMONIC came in!

The total SHUT DOWN – and then the LOCK DOWN of the world wide economy – and finally the KEY needed to open the LOCK would be the MANDATORY VACCINATION – that you just could not say NO TO!

Now, which STATE in the world already has a version of this tracking system up and running thanks to Google – Facebook & the parent company Alphabet etc. ?

You guessed it – CHINA does

‘So now that we’ve considered what is going on here in Part One of this new series – you might be wondering if it could get any worse!