TAKE THIS THREAT SERIOUSLY – YOUR LIFE MAY DEPEND ON IT

I’ve already warned in a couple of articles and posts now that if the Democrats get back the White House…, ALL CHRISTIANS and CONSERVATIVES (aka Trump Supporters) will become targets of extreme torment and revenge from the far left!

They are pissed that Trump got in…, and that anyone in America voted for him.  Conservatives and Christians will be public targets for abuse and torment if the election goes for the Democrats.

For those who think that the next “change in power” is going to bring joy, peace and happiness back to America…, READ THIS from Breitbart:

Rocker Tommy Lee Warns Trump Supporters: ‘We’re Going to Pay You Back So F*cking Hard for All This Sh*t’

Mötley Crüe frontman Tommy Lee warned that supporters of President Donald Trump would face “pay back” if the Democrats win back the White House. His missive ended with the threat that the payback would see a “gargantuan metal mountain” made of confiscated guns “emblazoned with the face of Hillary Clinton.”

The text escalates with every sentence, offering increasingly declarations of how the Left would get its revenge on supporters of the Trump administration.

“You Trumpsters better pray that liberals never gain control of the WH again,” Tommy Lee wrote, “because we are going to pay you back so fucking hard for all of this shit.” Lee proposed “Planned Parenthoods on every damn corner,” and repainting Air Force One “pussy hat pink” for aerial deliveries of “birth control pills, condoms, and atheist literature from the cockpit.”

“We’re going to tax your mega churches so bad Joel Olsteen(sic) will need to get a job at Chik Fil A to pay his light bill,” he continued, following it with changes that would be made to every one of the famously conservative fast food franchise. “Have fun with the new menu you bigoted fucks,” he said. 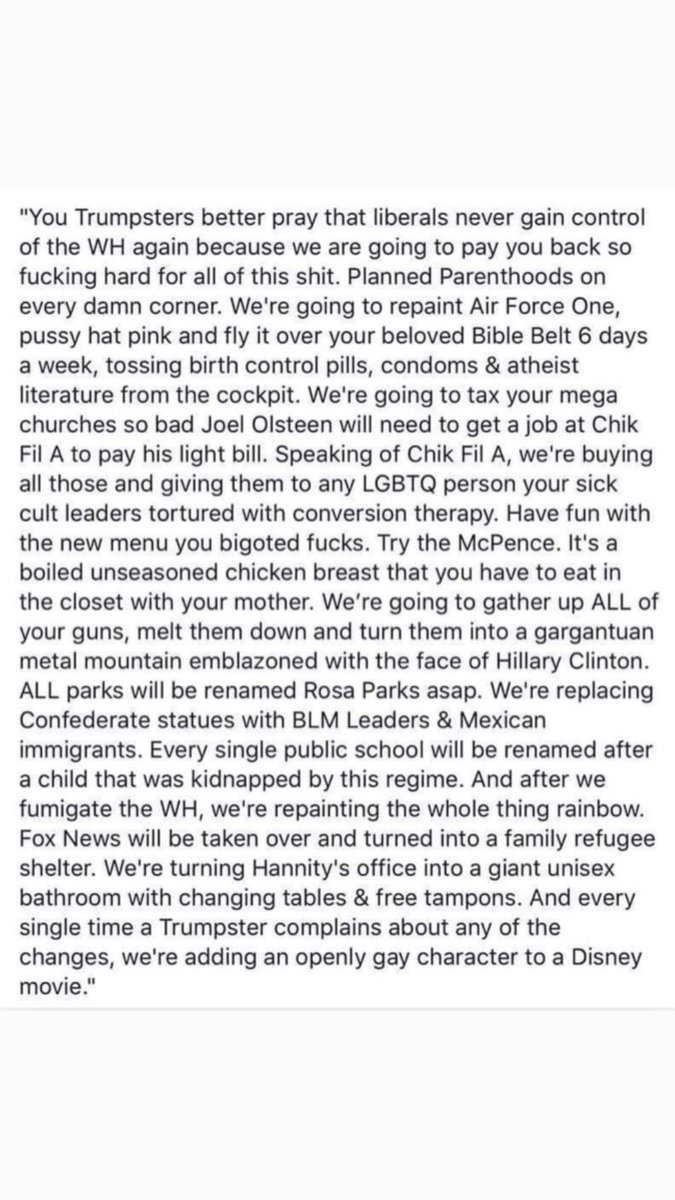 LIFE IN AMERICA AFTER THE 2020 ELECTION

How in the world can anyone support these maniacs!? ?