THE ALIEN “GRAY” – Part One

This post has been rolling around in my head for awhile.  It will contain information that I believe YOU need to know…, and it has to be written! For the conclusions of this post to make any “sense”…, there are an inordinate amount of dots to connect…, and while each dot has tons of “proof” to back it up…, in the end…, the conclusion I am going to come to is at best an educated guess!

That being said…, my conclusion…, which might take quite awhile to get to…, could just be the most “important” thing that you’ve ever read or heard in your entire life…, and could change EVERYTHING you think is real, or is happening behind our backs…, it’s THAT HUGE!

For those of you who don’t “like” speculation…, my dot connecting procedures do make sense…, and sometimes we “humans” need to follow our gut instincts,  instead of running off to a CHANNELER to tell us “how we are supposed to think and feel” about every little thing we don’t understand!

THE ALIEN GRAY…, does exist!

There have been many “articles” coming out lately suggesting that it is all just the military doing this…, (sort of like a “stage show”) for clandestine and nefarious reasons known only to them…,  and that no such beings actually exist.

People like Dr. Steven Greer and others have suggested this!

However…, before we get “sucked in” by that line of thinking…., we have to look at the countless eye witness reports of men and women who have seen these beings, worked with them, and claim that they are “VERY” real!

I myself have met people who have seen and worked with them…, so the people claiming they aren’t real…, (because they have never seen one) are “speculating” as well.

We also have documented (video) evidence of “many” people who have seen and interacted with them.

A good place to start is with this article that talks about Dan Burisch/Dr. Danny Crain.  Many people think he’s a liar…, and that he is not telling the truth…, but there are multiple witnesses and documents in this one article that claim otherwise, including legal Affidavits that are signed and notarized at the end of it.

This long article linked above is simply just important background information for starters, because before I can go forward…, I’ve got to establish that Alien Grays actually do exist…, before I start connecting the dots about what they ARE TRUELY UP TO…, what they are really doing here!!  (It will blow your mind!)

So that is Dr. Danny Crain!   Then we have Phil Schneider…, a man who claimed to be involved in the construction of many of the Deep Underground Military Bases inside the United States!

Here are a group of informational videos, where he talks about his own credentials…, and his insider knowledge.

He talks about the technology gotten FROM THE GRAYS…, the underground bases, and his experience of finding a group of Alien Grays while drilling to establish a new Underground Base.

These are posted in smaller pieces to make them easier to watch!  This information is hugely critical to know!  I implore everyone to view what this man has to say!!

(It would also be important to remember that Phil Schnieder was murdered by persons unknown for giving his testimony, and trying to bring out the TRUTH.)

In this second video, he talks about Groom Lake (Area 51) claiming that he personally helped to build NINE underground bases there…, each one basically a city unto itself!  Also, (for anyone who does not think this guy is a builder…, he uses many terms that ONLY someone involved in construction would know).  He next talks about building an “extension” underground onto an already existing base in Dulce (dull say) New Mexico which he says is Los Alamos Labs!  One of the underground extensions a city the size of 3 cubic miles!  He next talks about his first  personal experience of coming face to face with an alien gray (in August of 1979), because one of the extensions the government had decided to build was right on top of an underground base already occupied by a group of grays…, which apparently had already been there for about 4 to 5 HUNDRED years! (Dulce again is in New Mexico).

In this next part three…, he talks about the horrible smell (an important “dot” to be discussed later) associated with his first encounter with a 7 foot tall gray…, how he pulled out his side arm and shot it…, and then almost died from an electro-magnetic weapon that “fried him”.  He tells us many secret service and green berets lost their lives in the following battle…, all because the government did not inform them the grays were there. (Where they were drilling.)  Next, he pulls out a picture of a man named Valient (Val) Thor…, (from Venus)…, who has been working for the pentagon for 58 years (at the time of the video) and had not aged a day in 58 years.

He tells us that Val Thor has 6 fingers and 6 toes.., speaks over 100 languages, has copper oxide in his blood, has an IQ off the charts (over 1200) and can live about 470 years.  He says he did in fact personally meet Valiant Thor one time.

Here is a picture of Valiant Thor…, who is sometimes referred to as: THE STRANGER at the Pentagon! 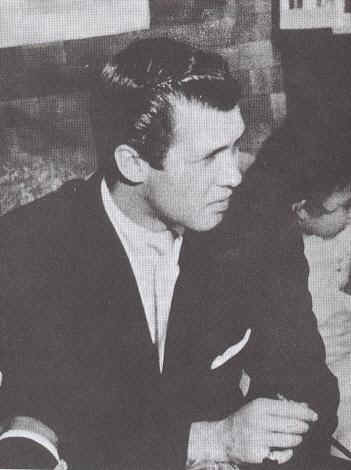 Here is a short synopsis of Valiant Thor

The above link questions if Schneider was telling the truth about Valiant Thor (Which is why I posted it).

However, here is even MORE information on Schneider personally and contains good info, which supports his story…, along with an animation video of how tunnel boring machines are able to build underground cities and bases very easily!

Besides Phil Schneider…, we also have people like Capt. Mark Richards…., the Capt. Who is now in prison in California for leading the “raid” on the lower levels of the Dulce Secret Base in order to free over 3,000 women and children who were being used as “sex slaves” by the Alien Grays…, many of whom were being experimented on…, and most of which were being kept in cages!

Many people have claimed to see hundreds of cages (in these secret bases) of young children (who were totally naked) being kept in these cages that were stacked several high.

Captain Mark Richards (a true hero) in my opinion…, is ONLY in jail because he dared to lead a strike team into this underground base and release those who had been imprisoned.

Mark Richards is “in jail” (in my opinon) because OUR GOVERNMENT made a “treaty” with these grays that made taking women and children for experiments AND as sex slaves…, “OKAY”…, as long as advanced technology was given in return!    Richards broke that treaty…, and for that reason is now in prison for the rest of his life.

I personally interviewed William (Brett) Stillings…, who told me he had interacted with a small Alien Gray…, (a being he had named SAM) and had become quite fond of.

All of this information simply is being offered in order to give the reader enough proof that there is such a thing as an ALIEN GRAY to move on into connecting the dots!!

Now…, here are the first few dots I am going to throw out to you early!

These are just the first few dots of many dozens and dozens…, which will be brought forth before I give my conclusion which will be almost unbelievable!

But here is something to think about for now!

Where have we seen pictures like this one associated with high level government officials??

I can tell you one thing for certain…, EVERY SINGLE TIME any of this starts to surface and get out into the public view…, the POLICE…, and the “AUTHORITIES” go to monumental lengths to DESTROY all such claims with extreme prejudice!

They did this in the Hampstead case…, using every power at their disposal to use the (CRIMINAL MEDIA)…, (CRIMINAL POLICE)…, (CRIMINAL JUDGES) to cover this up.

Here is a video that you also need to look at by a woman who was murdered for trying to bring out the TRUTH of the Alien Grays!

I’m telling you this goes far, far, far DEEPER than you’ve ever imagined!

Please help yourself to understand this important several part article by going to the links AND watching all the videos!

Interesting that the video cuts out briefly at 44.00 when the abductee asks what the cloned bodies are used for! This recording has obviously been tampered with in order to remove some vital information that other interests don’t want us to know! But otherwise very interesting.

If one has to say something about artifacts | Save The World