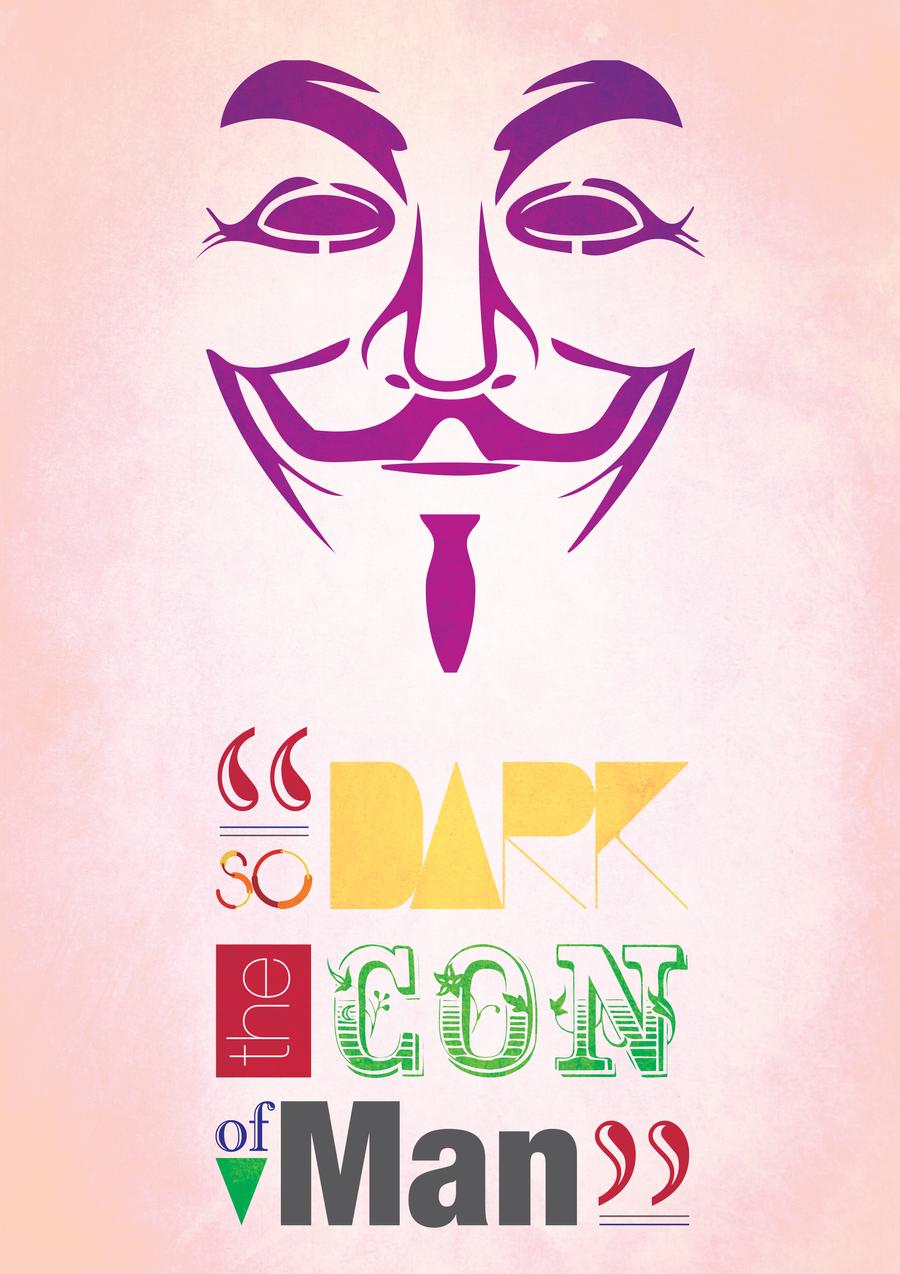 The only tool that can be used against the TRUTH effectively, is it’s opposite.  LIES are Satan’s tool.

Make no mistake here, in a war of information, LIES are the only way that truth can be covered up effectively. In fact, if used constantly against the truth, then lies do become an actual WEAPON!

Let’s not fool ourselves!

The Main Stream Media, and those who use lies (for any reason) are at WAR with the TRUTH and are very literally trying to KILL the truth!

This by far is one of humanities biggest problems!

If you want to see a simple graphic of what we are really talking about, look below:

To be “at war” with the truth, is to be “at war” with GOD himself.  I don’t think I can make this any more clear than I’ve already made it for those who are reading this post.  There is no other way to look at this, and if you can not see this, then you are spiritually BLIND!

If you are one of those who try to write a blog about spirituality, but are still an “apologist” for those who are willing to LIE…, then, you are the BLIND, who is leading the BLIND.

IN OUR MODERN WORLD – LYING IS EVERYWHERE

This is very unfortunate.  And, it is not getting better – at least not yet.

We have men and women who work daily in the Media, and who work in the sacred halls of Government, and in positions of so-called “Authority” who are desperate to KILL the truth with lies and falsehoods.  They do this because Truth is not “convenient” to their continued control of humanity nor is it convenient for all of the schemes they have for making money.

DECEPTION is just another word for “CON”

We are in a time of great “DECEPTION”.

And just as George Orwell said in his book: 1984 – During times of Universal Deceit – Telling the truth is a revolutionary act! 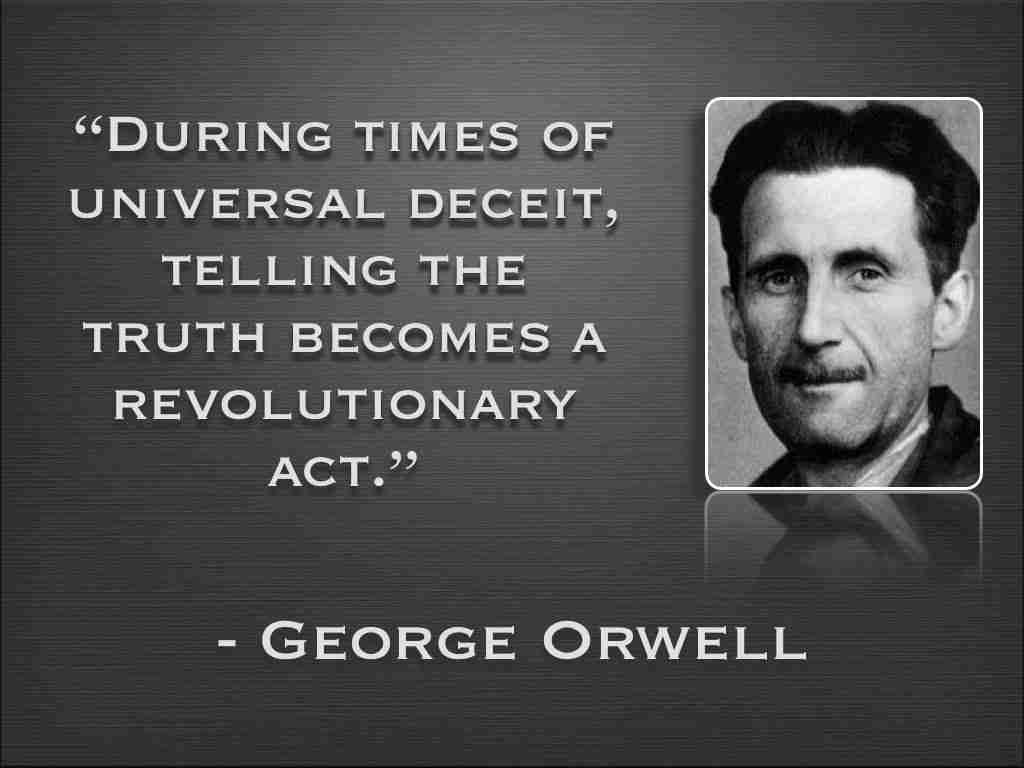 Deception is happening constantly, and it is coming at us from every direction!

THIS IS A “WAR” GOING ON HERE…, and THERE ARE ONLY TWO SIDES TO THIS WAR.

There are not “many” sides to this battle!  It is simply “good” vs. “evil” and that is all there is!

We have been asleep!

Upon awakening, we have found that as a result of our GREAT APATHY and our GREAT COMPLACENCY with regard to telling the truth,  SATANISTS & LUCIFERIANS have now come to control the entire world.

THIS IS A TRUTH THAT MUST BE TOLD, AND ONE MUST RECOGNIZE THAT SAYING IT IS A REVOLUTION

This did not happen over night!

Many good people, 0ver a long period of time, were conned and deceived into thinking that LYING, did not matter.

I’ve said many times on this BLOG that “telling lies” and “keeping secrets”, is our single biggest problem here on the Earth.


My opinion has never changed.

There are countless beings and races living in other places and realms who agree with me!  They think I am right.  It is only the people from Earth who disagree.  That is why humanity (in my opinion) is broken and needs fixing.

To “think” differently than what I just wrote above is to ALLOW yourself to be deceived.

It is to allow yourself to be CONNED.  It is to willingly hand over your heart and your mind to the Satanic – because it is ONLY the dark and the Satanic who benefit from lies and deceptions.


The Main Stream News Media – which is nothing more than a mouthpiece for the Satanists – want you to believe that both lies and secrecy are very necessary for your security and for your safety. This is preposterous, but they say it anyway.

Lies and Secrecy are necessary for THEIR security, and for THEIR safety because they are afraid of YOU!

In order to reinforce this false teaching, they create fear every single day, going so far as to create false flags and gruesome scenarios around the planet in order to convince you that you are NOT SAFE, and that only LIES and SECRETS will help you to stay safe from all of the dangers around you – dangers that “they” themselves create.

In the past, I read countless articles on well known NEW AGE BLOGS that “defended” the use of LIES as a necessary thing.

There were hundreds – if not thousands – of articles written about Barack Obama during his Presidency, and specifically written in “defense” of his continued failure to tell the truth, or to initiate “disclosure” – which supposedly he was going to do according to many “Channelers”.

Every one of these articles – written by the New Agers – said that his use of LIES were absolutely “necessary”.

When I challenged that and asked them “Necessary for what?” – the response was always that Obama was “playing a role” and that his lies were very important to “catch all of the bad guys” – which he was most certainly going to do!

NEWSFLASH:  BARACK OBAMA “CAUGHT” NO BAD GUYS!   NO DARK PLAYERS OF THE CABAL EVER WENT TO JAIL UNDER OBAMA’S WATCH…., PERIOD!

This is something that almost no New Ager who supported him is willing to admit.  It is dirt neatly swept under the rug.  New Age Bloggers themselves became willing purveyors of DECEPTION as well!

Barack Obama LIED constantly as President of the United States.  He lied every single day that he was in office. 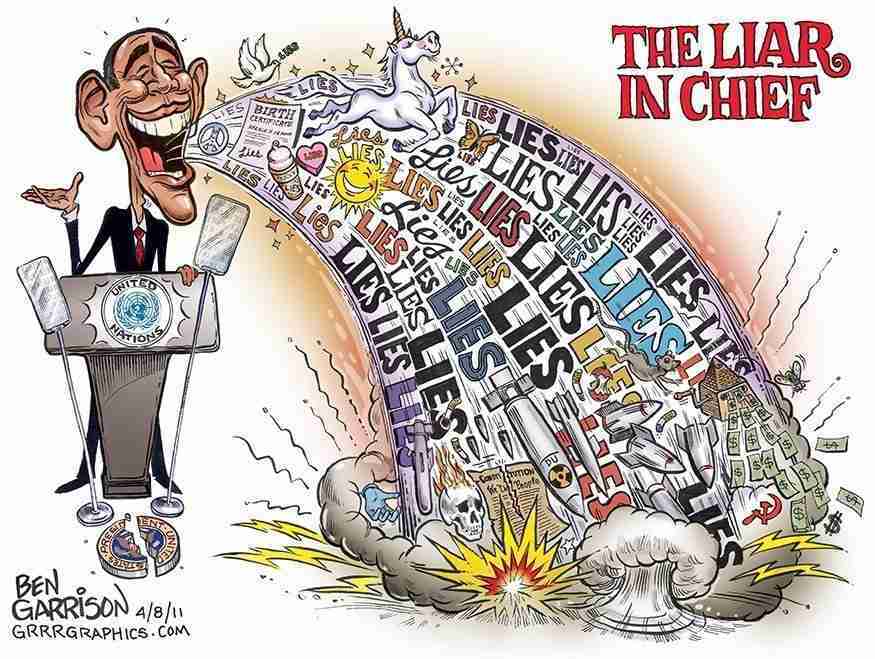 There are countless lists of his lies all over the internet!  His entire LIFE HISTORY seems to be one big lie, and everything he says about his life before being President as well!

Here are just four of those lists:

AND YET, STILL TO THIS DAY, DOZENS OF NEW AGE ARTICLES EACH MONTH ARE BEING WRITTEN SAYING THAT BARACK OBAMA IS/WAS A VERY HIGH SOUL

SATAN is said to be the “Father of all Lies”…, and those who engage in lying are said to be: SONS OF SATAN.

Always remember this!  Lies and Deception as we speak are ruining and killing this Planet.  We can not afford to be stupid about this and start defending men and women who engage in deception.

Just like the Main Stream Media needs to be called onto the carpet, so do the millions of men and women writing for the New Age.   For those who still do not understand what this Part Sixteen in the Great Con of Man – The End Game – has to do with MAGIC or HARMONICS…, then I offer this link as a review:

Please re-read the entire post linked above, and keep what I just wrote here in mind!

Morning, I have been reading your Great Con of Man Series & am AMAZED- You have taken things that I believed & gone deeper!! Some of the things you talked about I have always known, yet couldn’t put words to. As a Psychic Medium/Experiencer/Survivor of Molestation(Not Trafficked) I have read & heard others in my Circle having TDS & talking just as you stated above & I can’t believe the things coming out of their mouths. My main thought is how can you call yourself psychic if you “Believe” everything MSM & Hussein telling you??? It floors me. They can’t see thru the lies. And of course you know you can’t tell them differently. As a person that has been “Red Pilled” for a long time-All I can do is let my actions speak louder than words. Lead with Love & Light-You did open my eyes even more when you stated that the beings us New Agers work with are actually part of the Cabal- In the last few years I have pulled away from working with them & wondered why! Now I know, I have even stopped saying I was a “New Ager” I am a Spiritual Being having a Human Experience There is much work to do & when I have found wrong being perpetuated onto others; I have & do take(n) action. When it is against myself; I pick my battles as I am not willing to hand my energy/power over to just anyone. This series & The one with the Esoteric part is AMAZING & Enlightening!! I am going to be reading the others as well!!!