Here goes (for what it’s worth).

This will be a tough one (especially for New Agers) because it is a direct proof that what they’ve been taught to believe has been a LIE! 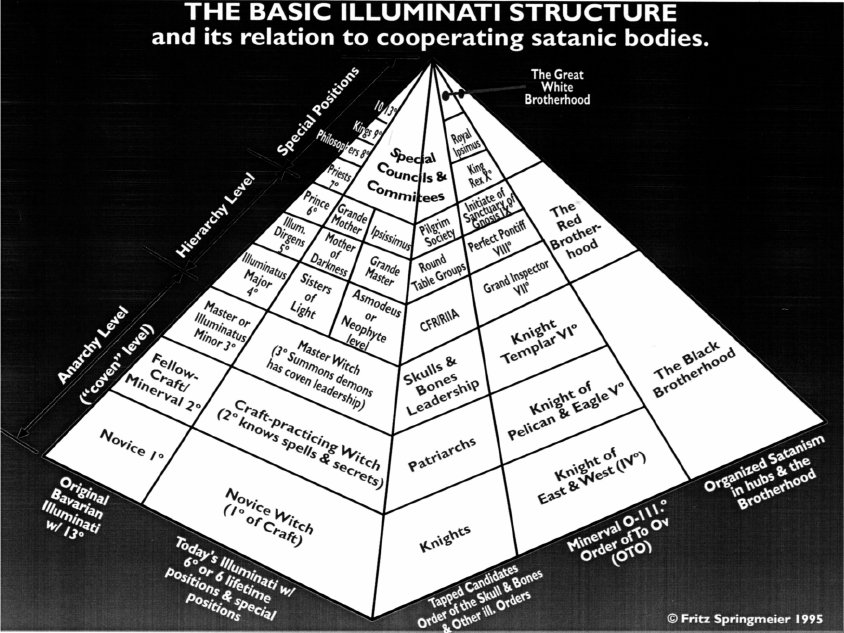 According to Fritz Springmeier, the GREAT WHITE BROTHERHOOD sits at the very TOP of the Illuminati/Luciferian Cabal!

Well according to Wikipedia…, THE GREAT WHITE BROTHERHOOD is supposedly a group of “Ascended Masters” who are said to be supernatural beings of great power who spread spiritual teachings through selected humans.

The Great White Brotherhood, in belief systems akin to Theosophy and New Age, are said to be supernatural beings of great power who spread spiritual teachings through selected humans.[1] The members of the Brotherhood may be known as the Masters of the Ancient Wisdom or the Ascended Masters.[1] The first person to talk about them in the West was Helena Petrovna Blavatsky (Theosophy), after she and other people claimed to have received messages from them. These included Aleister Crowley, Alice A. Bailey, Guy Ballard, Geraldine Innocente (The Bridge to Freedom), Elizabeth Clare Prophet and Benjamin Creme.[1]

Can you hear the needle on the record player going…, bbrrrrrrrrrrrrrt

The Great White Brotherhood – in “belief systems” akin to those held by the  NEW AGE..., are super natural beings of power who spread “spiritual teachings” to select humans.

But…, according to Fritz Springmeier…, the GREAT WHITE BROTHERHOOD sits at the very top of the Illuminati/Luciferian Cabal!!!

Let’s take it step by step!

We KNOW (for a fact) that most of the men and women who sit at the top of the Cabal are FREEMASONS.

We also KNOW (for a fact) that Helena Blavatsky…, founder of the Religion called THEOSOSPHY – and called the GOD MOTHER OF THE NEW AGE is both a Freemason and a Luciferian!

She says so herself!

You can’t dispute HER OWN WORDS!

She also says that Lucifer represents  an ever living “symbol” of sacrifice for humanity!

Now…, this is in her OWN WORDS, and taken from her book THE SECRET DOCTRINE

Do you suppose (and I’m just spit-balling here) that because Helena Blavatsky was a FREEMASON – believing that LUCIFER is the “god” of our planet – and who talked openly many times about Ascended Masters and the Great White Brotherhood…, that she just might have been an “intergral” part of the ILLUMINATI??

Do you suppose that the GREAT WHITE BROTHERHOOD is a group of DARK MAGICIANS who are the “spiritual guardians” of the LUCIFERIANS…, and NOT (as so many people want to believe) the guardians of humanity as a whole???

If we can at least conjecture that Blavatsky is a part of the Luciferian Cabal…, the would it stand to reason that all who associate with her would be a part of that AS WELL??

If so…, then let’s take a good look at this picture where she CLAIMS to be surrounded by 1oo percent bonfide Ascended Masters!

So let’s just take a good look at some men who Blavatsky rubs elbows with!

In the image above…, she is seated while surrounded by three men she CLAIMS are “ASCENDED MASTERS”!

All of these men pictured appear to have access to unlimited wealth in order to afford such oppulant clothing in the late 1800’s.

It has been written (in a history of St. Germaine) that he spent almost all of his time visiting with – and even staying with –  various European Royals!

Thus…, it is not too much of a stretch of the imagination to think that what is being refered to as: ASCENDED MASTERS are in fact “men” who sit at the top of the ILLUMINATI/LUCIFERIAN PYRAMID and are the spiritual teachers of the LUCIFERIANS!

The “idea” that they are the “Spiritual Teachers” for the masses is…, (and always was) A HUGE CON!

The men pictured above are most likely powerful MAGICIANS who gained that power through the study of the Ancient Mystery Schools…, but used that power for a very DARK purpose!

When Blavatsky…, Alice Bailey and others speak of the GREAT WHITE BROTHERHOOD and it’s Ascended Masters…, she is talking about the spiritual teachers of the LUCIFERIANS!

Now…, if you still have a difficult time with this…, notice that Alice Bailey started a publishing company for all of her “Spiritual Books” and named it the LUCIFER TRUST PUBLISHING COMPANY!

Come on people…, this is NOT ROCKET SCIENCE HERE!

A few years later…, (when it became too obvious) she changed the name to LUCIS TRUST Publishing…, (which is still in operation today).

Now…, check out the Lucis Trust logo…, which is BLUE PYRAMID…, and compare that to the FBI “boy-lover” Pyramid Symbol!

Boy there certainly is quite a lot of similarity there!

If you want to see even MORE SIMILARITY…, look at the Lucis Trust symbol in a MIRROR!

Once you put it in a mirror and look at it that way…, you can see it REALLY LOOKS SIMILAR!

The GERMANS knew it way before World War II.

Look at this symbol mixing the logos of the THULE and the AHNENERBE!

Okay…, so WHAT (pray tell) is this telling you about the early 1900’s and the GERMAN SECRET SOCIETIES???

Sex with young children (especially boys) is KEY to the ENLIGHTENMENT the LUCIFEIAN CABAL OFFERS!

Please see THIS article for some MORE interesting information!

SAUCE FOR THE GOOSE….