Today, I posted a reminder article about Former Supreme Court Justice Scalia.  There is a “method” to my thinking, and that is for you to see clearly how the Media is tasked with their main purpose for being, which is DISTRACTION.

You see…, “these times” of exposure were foreseen by those in power…, and the ONLY way they could see to confuse, confound, and befuddle the masses as to the Hidious Nature of all of their criminal activities was to DISTRACT them with hundreds if not thousands of other things on a daily basis.

In this way…, the public would be so numb…, and “desensitized” from all of the other “scandalous” news they would barely register a story about one of the most prominent Supreme Court Justices in History being both a Satanist, and a Pedophile.

And this is what it has come down to really…, is OUR ability to sort out and deal with all of the revelations that are happening at this time.

Make no mistake about it…, this is NOT a time to get overwhelmed and stick our collective heads into the sand…, because according to Cosmic Law…, we get only one chance to OBJECT to all of this BEFORE according to the Law of Free Will…, “THEY” get to claim that since we all knew exactly what was going on…, and DID NOT OBJECT to it…, then we must have been in “agreement” with what they were doing.

This is a “game” they are quite good at…, and the roll out of all of these “FACTS” about what they are doing…., at the very same time that they are actively creating MAXIMUM STRESS and MAXIMUM DISTRACTION for all of the human masses is NOT an accident.

So let’s just get our minds and our heads CLEAR about this!  The revelatory times we are in now were foreseen!    So, in order to use COSMIC LAW to their advantage…, they choreographed a TIME of maximum chaos and distraction all around the world that was running in Parallel with all of the exposures they KNEW had to happen.

In this way…, they figured that 99 percent of humanity would be so “shell shocked” from everything else happening around them…, they would have little time or even concern about the FACT (yes it is a fact) that LUCIFERIANS are actually running the world!

They knew that their sick religion would have to be exposed at some point and they created maximum chaos all around the planet at the very same time these revelations were to come out.

Using their power of money magick, they bought up everything and everyone they could…, had anyone and everyone in high up rolls sign “NON DISCLOSURE AGREEMENTS” in order to gag them…, and then started endless wars, terror, and abysmal poverty all around the world.

You see, in this way…, as all of these horrid Revelations of their sick religion is coming out…, people will be 100 percent distracted from doing a single thing…, or even saying a single thing about who these people are!

BUT DON’T BE A FOOL

There is a larger reason for this!  IF we collectively don’t take action or say anything as we are learning about this…, then COSMICALLY…, they can claim that upon finding out the horrible truth of all of this…, we collectively did and said NOTHING.

Just to once again be clear as to what we are talking about here.

These LUCIFERIANS practice blood sacrifice!  They murder young children (usually torturing them first) and then killing them only when the blood is absolutely filled with the hormone ADRENALINE!  The adrenaline rich blood is like a drug, which gives the drinker of that blood (yes they drink the blood of the children they kill) a “HIGH” which is very addictive.

There have been certain whistle blowers who have come forward online and claimed to have actually “tasted” or “drank” the blood of a human victim who had gone through such horror, and claimed that indeed they experience such “high” they could not describe it.  Not only that…, but apparently they had also experienced a tremendous increase in vitality and energy at the same time as well.

So you can see why they would continue this practice.

These LUCIFERIANS believe in adult – child sex, and consider it a sacrament to Lucifer!  So, not only do they practice RITUAL CHILD SACRIFICE, and practice blood drinking…, they also engage in pretty much constant “child – adult” sexual relations (mostly of the very abusive type) which also gives them an “energetic high”!  (See the Hempstead Children’s Videos for discriptions of the abusive sex they endured)

Jay Parker has explained in several of his online video interviews…, that as Satanists…, (or Dark Magicians)…, they have perfected ways of “stealing” or “taking” the vital energy of young children directly from their ROOT CHAKRA as they analy rape them.

So this is not just fun for them…, there is an actual ENERGY TRANSFERANCE from the innocent child to the adult as this is being done.

“Practicing” Satanism…, or Luciferianism is a constant battle for these people because they don’t want to get caught!  So in order to keep their ways of living a secret…, they have all become PERFECTLY TWO FACED! 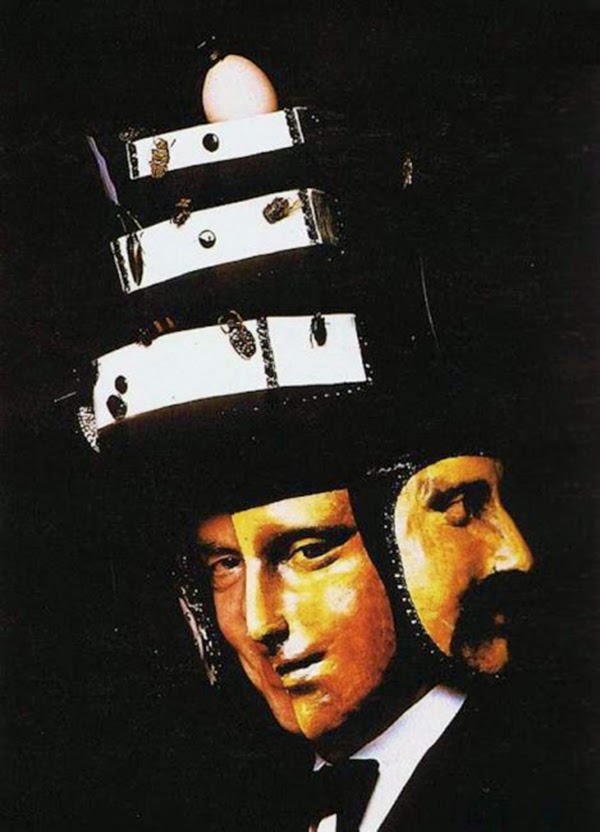 This is one of the “masks” that was worn at the ROTHCHILDS PARTY in the 1970’s that shows the world how they operate.

Up until now…, they have developed SECRECY around everything they do…, which is always done in secret groves… BOHEMIAN GROVE…, or in secret EUROPEAN CASTLES and on large EUROPEAN ESTATES that consists of thousands of acres…,where they actually “hunt” young children for sport by stripping them naked and then sending them off running into the woods before chasing after them with guns and dogs!

THE VATICAN is 100 percent involved in this…, make no mistake about it.  The testimony of SVALI is clear about this!  For, it was under the VATICAN where she witnessed her first child sacrifice (a little boy of only 5 or 6 years old).

Priests, Cardinals, Illuminati Family members as well as a bunch of child and adult initiates were in attendance…, and the victims blood was indeed collected and drank by the participants.

This is NOT a problem that can be explained away as just being done by a few ROGUE people!  This is a highly organized and highly orchestrated WORLD WIDE CONTROL MECHANISM!

The ROYAL FAMILIES of most European countries, and well as Major Governments are ALL heavily involved in this!  They know about it…, they do it…, and they cover it up!

Jimmy Saville in England was just one of probably thousands of “procurement” people who are out there getting and collecting young children for the ELITES.

We have now heard of the horrible things going on in Austrailia by Fiona Barrett who has named names at the highest levels!

Police, Judges, Lawyers, County, City and State Officials were all involved in having sex with these boys.  This went all the way up the Federal Government in Washington DC where boys were sent to the White House as “RENT BOYS” for sex.

My point is simple!  Don’t let all of the CHAOS happening around you… “DISTRACT” you from realizing what is really happening ON THIS WORLD!

We are finally coming face to face with the SATANISTS who are being exposed!

NOW IS THE ONLY CHANCE we will ever get to object in thought, word, and deed to what they are doing.

If we do not use this time…, it will not come again…, and even the UNIVERSE will not support us later on.   Because at the moment we finally found out what was really going on…,  WE DID NOTHING!

THAT IS CALLED:   TACIT CONSENT

Get your head out of the sand!   We need all hands on deck!

Please…, forward this article to all who need to know!

Yes, US Government Propaganda Use Against American Citizens Is Officially Legal Now