I know that most of you have deep feelings about our world and the way things are happening here on planet Earth at this time.

So, it’s not like you haven’t already come to this same conclusion, but sometimes opening up the NEWS OF THE DAY on various websites and blogs is like swimming in sludge and sewage!

They call us sheep and cattle behind our backs every single day!

I’m firmly convinced that Q is working in “Intelligence”, and most likely somewhere above the NSA – (could it be military?) that has the capability and the capacity to listen in on every single phone conversation going on in the world.

This last Q basically says as much!

You don’t know how depressing it is for me to read something like this KNOWING that grown men and women from behind the scenes inside the government are “talking” about how to SHIFT the narrative, organize their endless “talking points”, or try to find friendly “insiders” who are going to go along with their agenda against everyone else…

Every single time I hear stuff like this, I feel like I’m in a house filled with five year olds, all of whom need to be spanked and sent to their rooms without supper!

Sometimes it just seems HOPELESS!     These people are NEVER going to come to GOD, nor are they going to ever come to TRUTH!

In my opinion the world is far better off without them!!

Long story short…., THESE PEOPLE NEED TO BE DEALT WITH!

Turning a “blind eye” (read: non-judgement) did absolutely NOTHING to help our world, or make it a better place!

All it did was to create an INFECTION that is now so huge, cutting it out is going to create endless problems for the rest of the human body!

John F. Kennedy wanted to “Break the CIA into a Million Pieces” back in the early 1960’s.

And THAT is when all of this should have been done!

Even at that time, the infection or  cancer that was “EVIL HUMAN BEINGS” had gotten way out of hand!

What happens if you don’t clean out a dirty, dank, smelly toilet for 55 years? (One that already needed cleaning 55 years earlier?)

Do you think it gets any better??

THIS HAS GOT TO STOP!

Once again, in my regular discussions with New Agers, (yes I can do “discussions” without going overboard) and also by reading what they are printing daily on their websites and blogs…, I find that they are repeating the SAME BULLSH*T about how every one of us just need to:

You can not imagine how tired I get trying to explain the same truth concepts over and over again to grown men and women who refuse to open their eyes because they have WILLFULLY closed them to REALITY itself.

Because you see, IF we did exactly what is prescribed above…, within just days (not even weeks) those men and women who are PURE EVIL would take over the entire world and ENSLAVE the rest!

The ONLY thing that is standing between the New Agers and the Illuminati/Luciferians are the good men and women of this world who CARE SO DEEPLY about all of humanity, they are willing to DO THE ACTIONS and the BEHAVIORS that New Agers are unwilling to do to protect anyone.

IT ALL BOILS DOWN TO MATHEMATICS

Jay Parker says that 10 to 12 percent of humanity is OLD WORLD CULT.  They follow the Babylonian – Generational Satanic teachings of:

If true, this would mean that there are:

I “dare” you to click on the link below and scroll down through every single News Report of  the “arrests” that have been made in the last year of serious Child Traffikers and Pedophiles!

This is from the Q research board!   You will be amazed and awed and just how many arrests have been made worldwide, AND, how many children have been saved!

How many arrests would have been made if the Police or Agents involved had:

I really don’t think that any New Ager’s even come to my blog anymore, but this question is just as valid to my regular readers!

Does anyone reading this post “CARE” to comment on just how many children would have been SAVED from a life of SEX SLAVERY (or worse) if those who could “do something about it” had followed the “channeled advice” to “just be happy” and to “not worry” about anything??

Did you scroll through the page that I linked above?   Do you see how HUGE this problem really is?

How many Channelers have said multiple times that no matter what happens to people living here on Earth…, “THEY WANTED THAT”…, and so we should not worry ourselves with their plight or their life situations?

I have read that same idiotic statement at least once a week for the last 10 years!

And yet, if not for the concrete “intervention” of actual LOVING and CARING people…, people who refuse to sit idly by…, (and therefore DO TAKE ACTION)…, the entire WORLD would have been enslaved and under the boot of the New World Order by now!

Something is very amiss with these damn channeled messages!

Two and two is NOT adding up to four in the way we are told it should.

Let’s Look at this another way..

Let’s say that you are a New Ager, and you get a cancer, or perhaps need heart surgery, or have some other disease!

Are you not a total hypocrite if you go to the hospital in order to get help?

But if you wanted it…, THEN WHY ARE YOU TRYING TO CURE IT?

In the very same way that New Agers will ALWAYS go the hospital or seek a cure for their cancer…, good men and women will see the ILLUMINATI AS A CANCER in the body of humanity and SEEK A CURE!

“Ignoring it”…, “not judging it”…, “surrendering” to it are totally BOGUS approaches to this problem.

The only REAL approach to any issue of consequence is FACING it and DEALING with it!

Now HOW we deal with it is possibly up for debate, or up for suggestion!

But the FACT that something MUST be done is NOT up for debate!

This is the “fine line” of this New Age teaching that does NOT CUT THE MUSTARD!

Too many people think (falsely) that surrendering, not judging, and accepting means:

This is the crucial and critical flaw…, the RED HERRING that has been sold to New Agers from Channelers, and the Entities they Channel!

ACTION MUST ALWAYS HAPPEN…, WE ARE LIVING ON A WORLD OF ACTION!

If you had the benefit of an actual GOD REALIZED MASTER standing at your side…, this is what that being would be telling you!

How “enlightened” can these Channeled “Ascended Masters” possibly  be if they do NOT inform you of something as simple as this?

Why am I able to tell you this on my blog…, having not yet GOD REALIZED, but simply walking the path of TRUTH?

Becuase I do NOT hand over my FREE WILL to anyone, ever!

I still “THINK” for myself each and every day, and do not “allow” others to do the “thinking” for me!  (No matter who they say they are)

Therefore, TRUTH reveals itself to me and becomes my best friend because I seek it from within my own being!

(NOT HEARING IT FROM CHANNELERS)

Whenever you sit at the “feet” of someone else looking for advice…, you are giving up your GOD GIVEN RIGHT TO THINK FOR YOURSELF!

If you do this…, then you may as well become a SLAVE!

So this is my “rant” for the day!   It’s getting more and more difficult to watch as “crazy” and “insane” human beings continue to sit idly by DOING NOTHING while the SATANISTS LIE-CHEAT-SWINDLE-DECIEVE-PLOT-PLAN-CONNIVE…ETC.

And too few GOOD HUMAN BEINGS seem to be upset by it!

How can a human being like this STILL EVEN HAVE A JOB?

150 years ago he would have been TARRED AND FEATHERED for his actions!

There is no honor, no love, no CARE!

HEY CNN…, LYING IS NOT OKAY!   GOD IS WATCHING!   AND I AM HOLDING YOU FULLY RESPONSIBLE FOR EACH AND EVERY SINGLE LIE SPOKEN ON YOUR NEWS NETWORK! 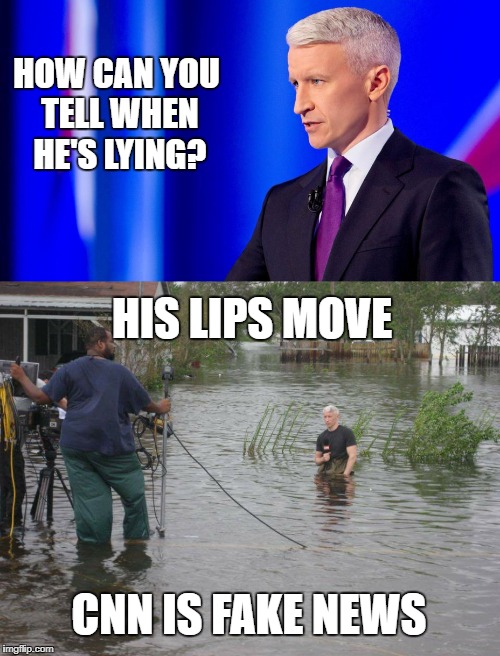 FOR THOSE WHO CAN’T ADD…