What most people don’t know – only because they do not really know how it all really works – is that America has 3 separate constitutions, not just one constitution – and that it was set up this way from the very beginning. 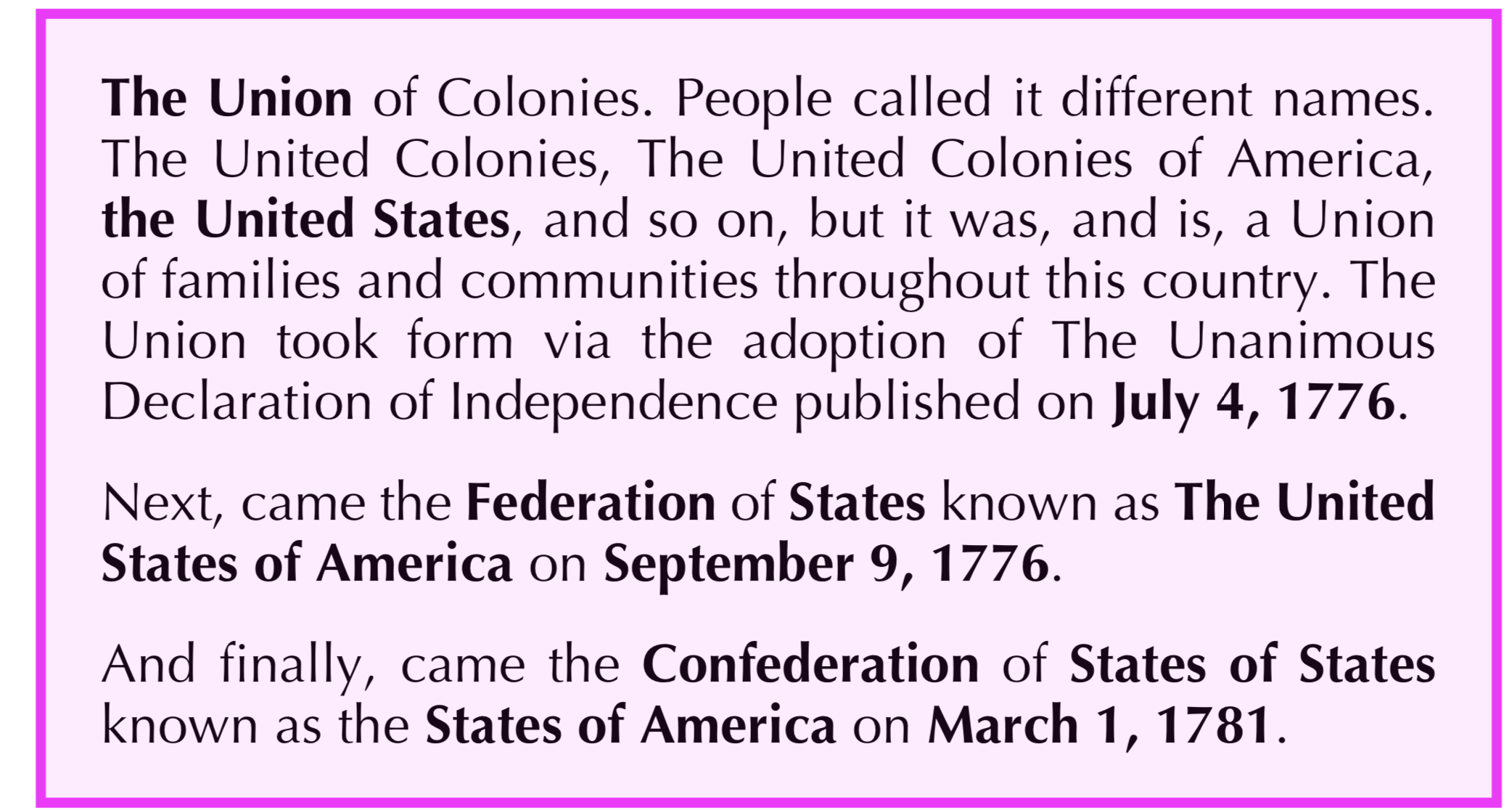 A visit at Grandma’s house is a MUST READ for people living in America if you ever want to understand exactly how this Nation was set up originally from the beginning!

Now, I’ll tell you why you need to read it, and read it fast!

It is due to the fact that the “UNITED STATES” – which is a Municipal Corporation with its roots at the Vatican – is now in the final stages of Bankruptcy!

This is one of the many reasons why Washington DC was intentionally vacated 2 months ago – (no it was not due to Corona Virus) – and had to stay vacated for 90 days!

On or around June 21st of 2020 – the Bankruptcy of the MUNICIPAL CORPORATION will be fully complete – and one part what you all know of as America – not all parts, but ONE of the three main parts of the American Government – THE MUNICIPAL PART – will cease to exist forever!

This means that all City Police – City Clerks – City Judges – and many other CITY and MUNICIPAL EMPLOYEES will probably be let go, get fired, or lose their jobs.

At that time – this part of America will be FREE once again from FOREIGN RULE!

However, thanks in large part to the evil doings of Barack INSANE Obama – who knew that this Bankruptcy was coming down the road over 4 years ago – just before he left office – signed all of the Municipal Parts of America over to the United Nations!

He did this in an attempt to do an END RUN around the Bankruptcy proceedings – and to saddle all living Americans with a new form of rule from the United Nations which was to take over the interests of the Vatican!

This was set up so that it would take place on the Municipal Level of Government (The City Level) – which is the first step toward the NEW WORLD ORDER!

The United Nations – and the U.N. are two very different organizations. They are not the same thing.  The U.N. is quite evil – and mostly populated with former NAZI’s left over from World World Two. The United Nations is the organization that controls the W.H.O. and many other philanthropic parts of the world body.

However – once again – repeat:

These two organizations are not the same thing!

The U.N. – as we speak – is pushing very hard for a ONE WORLD GOVERNMENT – NEW WORLD ORDER!   So even though the United Nations and the U.N. are not the same thing – behind the scenes – they do work together for the same goals!

So now everyone listen up – the Sh*t is about to hit the fan big time – and MOST OF YOU are not ready!

IF they do, they will CLAIM TO HAVE JURISDICTION here on American soil because Barack Obama gave it to them!

IF and when this happens – everything that the NEW WORLD ORDER wants to do – will be attempted to be done and very literally WILL BE FORCED UPON YOU AND YOUR FAMILIES!

The only thing that you can do – as Anna has been saying for several years now – is to give up your “UNITED STATES CITIZEN” political status – and instead come over to the land and the soil jurisdiction of America by instead claiming to be an:

You now have 3 weeks left to get your paperwork DONE!

What you may not be aware of – is that “secretly” over the last two or three years – over 30,000,000 people (30 million Americans) have switched their political status very quietly while no one was looking – just so that they would be prepared!  (The really awake 10 percent)

Those that are – United States Citizens – may end up living in a nightmare because the UN will be looking for those people specifically to rule over – and they will not be nice about it.

They may go so far as to try to ORDER you back into your homes and refuse to let you out!  They may also attempt to OCCUPY and TAKE OVER all City and Municipal Buildings and Municipal Properties here in America.

Honestly – I don’t know for sure what will actually happen!  All I do know – at least this is what I’m being told – is that the Bankruptcy is in it’s FINAL THREE WEEKS!

So don’t shoot the messenger!

Hey – “THEY” – were never going to tell you about this at all!  The Media was going to keep totally quiet about it, and simply allow the UN to take over!

They were just going to finish this bankruptcy – and then let all of this happen without warning a single soul about it.

For now – YOU MUST READ – a visit at Grandma’s house!  Also know that Donald Trump knows what is going on – and he is doing his very best to try to stand in the way of what is coming down the road – he can’t stop it – in order to protect as many people as he can from the fallout!

If you wish to “CORRECT” your political status – then please contact one of the State Assembly Coordinators here in America – who will be able to help you switch your status from a US CITIZEN – to an American State National.

Here are some of the links you will need:

Firstly, you can reach Dennis Knill (Arizona State Co-ordinator) by e-mailing him here:

Or, you can use these:

No One Figured This Out??? – Follow up video posted below!!!
https://www.youtube.com/watch?v=FbZry4mcZZA&t=14s

Thank you so much! I have downloaded the forms (Expatriation from Anna, Declaration of the Naturalization Act of 1779, and Witness Testimony) but it is very hard to find an example completed anywhere. (I did see where these have to be filled out in BLUE INK, and the CASE matters depending on who is filling out what items). I have emailed my state rep and searched Anna’s site. All I have is a birth certificate and I hope that is enough. If you can please post any samples of the forms filled out or know someone who can assist I will pay for their time. You have no idea how much this means to me. I have shared it in alot of places too.

Thanks again and God Bless!

Bradley Loves You
Reply to  Alice

Please feel free to contact Dennis! He is more than willing to help you fill them out!

Alice
Reply to  Bradley Loves You

Thank you Bradley, My state rep (not Dennis lol) got back to me right away! We just hung up after a wonderful conversation and he made me feel like a [safe] human being again! It’s amazing that any of us have to worry about that, after being good citizens our whole lives but I’m assured that FULL DISCLOSURE is coming soon. Another site that is worth mentioning and that I hope you’ll check out: https://ssbamerica.com/

I am actually going to be a volunteer for my county! 🙂 Thanks and I love you too!!

Any tips for your neighbors north of the border?

Bradley Loves You
Reply to  nateyad

There may indeed be something you can do!