THERE IS A WAR GOING ON “FOR YOUR MIND”

There really is nothing more to say!

You will either get this, or you will not!

Whether we are in the midst of an INVASION from ET (Extra Terrestrial) or ED (Extra Dimensional) forces or not, there is one thing that remains true, and can NOT be disputed.

These beings CAN NEVER take over the entire planet without first gaining our CO-OPERATION & CONSENT!

This is what we have to understand and comprehend!

OUR COLLECTIVE AGREEMENT IS VITALLY NECESSARY BEFORE ANYTHING CAN BE “DONE” TO US!

“WE” collectively must be convinced to freely hand over our world and thus our “freedom” TO THEM…, and if we do not…, they can NOT KEEP IT!

This is why OPERATION MOCKINGBIRD was so vitally important for the differing factions of the CIA that had already made “treaties” with the Grays and with the DRACO!

This obviously happened in the early 1950’s!

So, we have been “battling” these NEGATIVE FORCES for quite some time!

For those who can not remember, CNN was the very first Cable News Network that decided to run “NEWS PROGRAMS” all day long, (and even all night long!)

CNN was owned by Ted Turner back then, and it has been suggested that he is most assuradly a GLOBALIST that wants 90 percent population reduction on planet Earth!

It is “clear” after we’ve seen the role that CNN has played in distributing complete and utter PROPAGANDA…, that the CONTROL OF YOUR MIND has been their primary goal from the very beginning!

It was going to be their “JOB” to convince the rest of the men and women living here on Earth to ACCEPT and to even ASK FOR their own imprisonment!

This OPERATION MOCKINGBIRD is still ongoing and the “battle” is heating up as we speak!

MAKE NO MISTAKE…, WE ARE AT WAR!

Winning this WAR can only be achieved if enough FALSE INFORMATION and DECEPTIVE IDEAS are propagated into the public mind!

WE ARE SEEING THIS EACH AND EVERY DAY AS WE SPEAK!

So, regardless of what you THINK you see happening around you on planet Earth…, what you are really seeing is a COMPLETE and TOTAL WAR for your OPINION!

This is the “battle” that we are now fighting…, and it is UGLY and VICIOUS!

Anyone who thinks we are NOT fighting this battle is deluded, and in denial!

It is happening and unfolding each and every single day…, and we are NOT DONE YET!

THIS BATTLE REQUIRES ALL HANDS ON DECK!!

If you care about the Earth at all, you must be willing to engage in and to FIGHT THIS BATTLE by supporting the TRUTH at all costs!

IT IS OUR VERY SOULS WHICH HANG IN THE BALANCE!

You are fighting for your very right to survive as a free species!

“FOR WE FIGHT NOT JUST AGAINST MEN…, BUT INSTEAD, WE FIGHT DEMONS, DARK FORCES, AND PRINCIPALITIES!!

We will not survive as a species if we cast aside TRUTH and demonize those who are trying to “speak it”.

This battle is one of PURE GOOD vs. PURE EVIL

Your MIND and your OPINION are very necessary, because it is OUR COLLECTIVE WILL that is what will either save us from this INVASION…, or put us under the boot of TOTAL MIND CONTROL FOREVER!

Look at what is happening around you!

Get serious about the TRUTH!

You can not claim to be the slightest bit “spiritual” if you support lies, trickery and deception.

This is your moment to SHINE as a real spiritual being!

How deeply to you LOVE TRUTH??    How sincerely are you in your support of saying only things that are truthful and supportive of TRUTH??

Anyone who does not say truthful things (regardless of their politics) is in support of SATAN!

Here are the “latest” Satanic “GUCCI” models showing us exactly what they are all about! 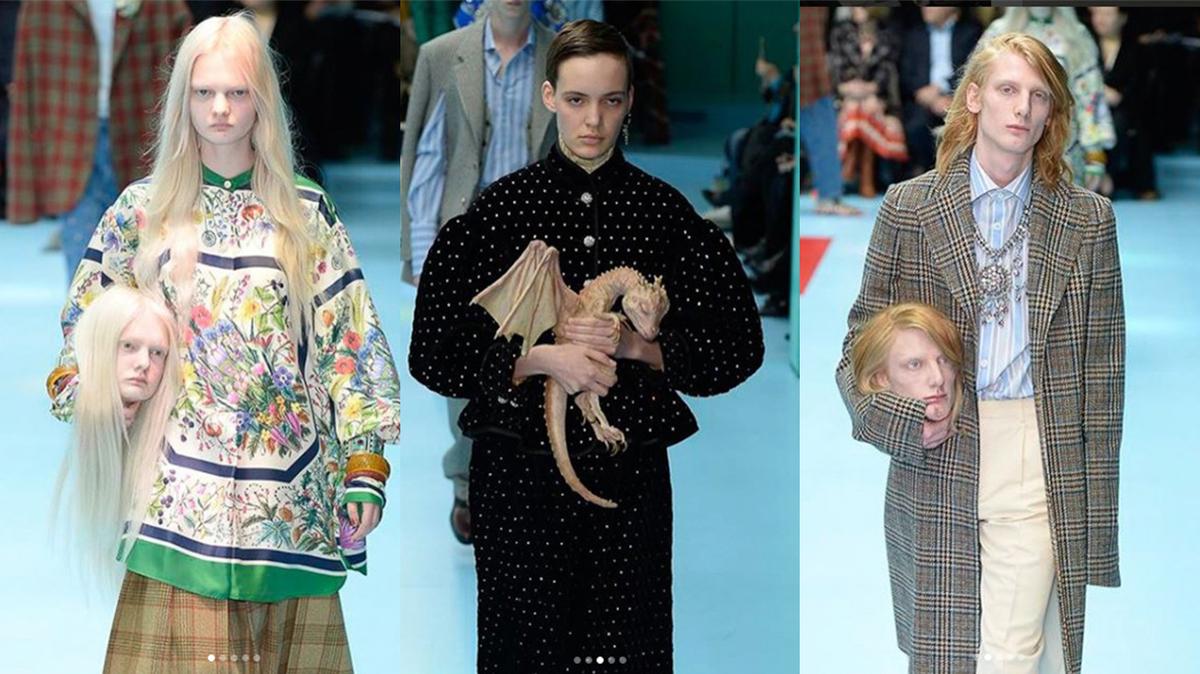 These “models” are walking down the runway carrying severed “heads” as “fashion accessories”!

Where are the “NEW AGERS”…, why aren’t they talking about this??

REMEMBER THIS – CHOOSING TO DO NOTHING…, IS A CHOICE!

It is a choice to allow evil to take over!  Getting out of the way of a mass murder and allowing it to take place IS participation and complicity!

Regardless of what you think…, THE DEEP STATE IS NOT ON OUR SIDE!

They are working against all of us by keeping everything HIDDEN, and using the Main Stream Media to LIE to all of us daily!

CNN is the most “Demonic” ridden News Organization in the entire world!

Why do you think they are being broadcast in every airport across the entire world???

Google, Yahoo, Facebook and others are HELPING THEM subdue you, and your OPINIONS…, so that you may be imprisoned in the future!

THE CHOICE IS YOURS…

Goes to show, people are strange.
That is all….