THIS IS “GOD’S” UNIVERSE 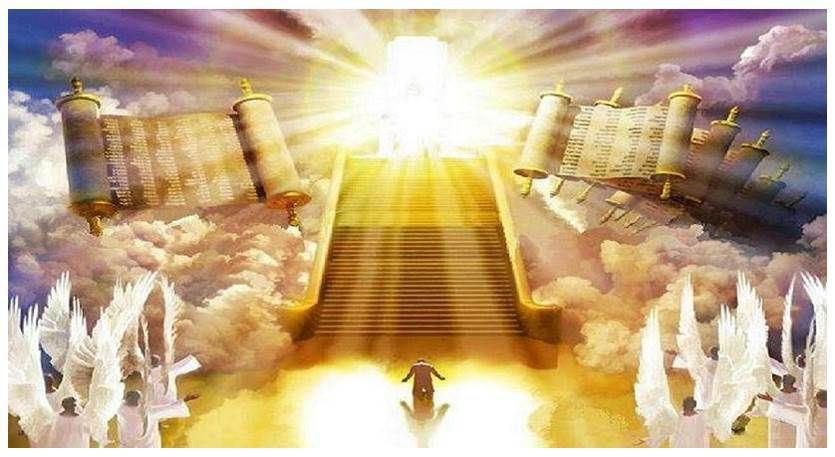 By now – if you have not already figured it out – there is some really funky “time manipulation stuff” going on out there!

Some of you are starting to notice things that don’t make any sense at all, and because you don’t think in term of TIME MANIPULATION – or in terms of GOD – you think none of it has any meaning.

Well, let me be the very first to remind you all of one single thing you may have overlooked.

THIS IS GOD’S UNIVERSE!

And if saying it this way does not seem proper to you – a better way to say this might be to say that HE is the AUTHOR OF IT!

Like any good book or exceptional painting has a creator – GOD IS THE AUTHOR and the ARTIST in this Universe.  The Universe is HIS creation – and thus it is HIS TO CHANGE!

Just like the AUTHOR of any book can work with it years after the fact, and can actually come in and make certain changes, or edit out a few of the parts that he never really liked – GOD can do the very same thing.

Take for instance my re-editing of one of this “truth blogs” most important series – THE GREAT CON OF MAN – THE END GAME.

I came in and re-edited that entire series in order to make it far more CLEAR!

It was originally written slightly vague, because it was too soon to have that series make certain statements,  however I can come in a year or two later and then clean it up at my pleasure!  I can do that because I AM THE AUTHOR of it.

I have all of the original text on MY COMPUTER – and I can log in and edit anything I want!  And, in a way, doing this kind of thing might even seem like I am doing TIME TRAVEL according to a certain logic!

I can edit the original copy of the text – leave the publish date in tact and keep the post exactly where it fits into the Blog – and then make it appear slightly different – as if it was always that way!

The only thing that might remain is an “echo” or a “ghost copy” of what once was – but no longer IS!

In the grand scheme of the Secret Space Program – and our entire Universe – the time travelers who wonder why they keep bumping into “time-lines” that don’t seem to be functioning any longer – should take notice of this blog post!

They do not seem to understand what I’ve just said at all!

And yet – if “echos” and “ghost copies” of something that “I” as the author of my own blog can (and do) exist concerning my original writings – writings which I have now changed – then why can’t “time-lines” that are now 100 percent MEANINGLESS – AND NO LONGER HAVE RELEVANCE – remain as echoes in the script of GODS UNIVERSAL STORY?

GOD has abandoned that version of history – edited it out – and changed the text!

So now, if I can do this with a BLOG that I myself created, and am the AUTHOR OF – then why can’t GOD edit HIS UNIVERSE, and change all the parts HE just does not like ?

To them – sadly, GOD is a mere “power source” or an “energy source” and nothing more than that!

HOW TERRIBLY FOOLISH OF THEM TO THINK LIKE THIS…

GOD is an absolutely awesome and astounding intelligence – an intelligence by the way which is unparalleled anywhere, and as is as SMART as they come!  HE has been around for quite a while, and you can NOT FOOL HIM as easily as the Luciferians think.

If GOD decides that the Luciferians are cheating and are NOT following the rules that HE has laid down for everyone inside of creation – HE will simply DELETE THEM!

HE CAN DO THAT!

Just like I – as the author of this blog – can go back into the original script and delete things that I don’t like, or things are no longer serving the message properly – HE can do that with the entire Universe!

Here is where the Luciferian Cabal keeps making their biggest mistakes!

They are so very, very ARROGANT!

They believe that they can HI-JACK GODS ENTIRE CREATION.

They think they can actually send armies directly into Heaven – which is outside of space and time – and put LUCIFER onto GODS THRONE!

If GOD wants to – HE CAN LITERALLY DELETE THEM from the “story of history” as easily as if they NEVER EXISTED in the first place!

I will now repeat a secret that most of you may not know!

GOD exists outside of TIME and SPACE!

This means that HE is the very SAME GOD – THE SAME BEING in the here and now – as in the past – and will be in the future!

IT’S THE SAME GUY!   SO PLEASE GET OVER IT ALREADY!

GOD – as the Creator, and the Author – can very literally “change HIS mind” as much as he wants – ANY TIME HE WANTS!

Those of us who can “tune in” to GODS FREQUENCY – because we spend most of our time LOVING HIM – know that HE is the very same being as he was 50 years ago – as HE is now – and will be 150 years from now!

ITS THE SAME GUY

The only thing that “might change” is WHAT HE WANTS TO DO WITH HIS UNIVERSE!

Try to get used to it!

MORE OF THAT IS COMING!

GOD WILL NOT BE MESSED WITH – NO MATTER WHAT THESE PROFOUNDLY ARROGANT LUCIFERIANS THINK, SAY, or DO…

Here is the final message for today’s blog post, and it comes from the illustrious “Q”

THE FUTURE PROVES PAST – AS USUAL

Bradley what are your thoughts on The Book of Enoch please?

Barney a most scholarly view of God as “owner or creator” of the Universe from the point of view of the King James Bible. I will not debate with you your quotes and opinions based on the words in the KJV of the Bible. There is no “wrong” answer her. Since time is of the “essence” here it may be well to remember that the editors of the KJ Bible subjectively cherry picked from those available sacred “documents” those writings which they felt represented the “Word” at the time the book was compiled. Further those writings were in many languages and needed translation. So a lot of subjective interpretation there also.

We’re there errors? We’re some texts edited to reflect some religious agenda? I will not debate that except to remind the reader to factor that into the interpretation.

What then of the knowledge that was hidden. Mystery schools information. The fires that destroyed those great libraries where rare and important knowledge was “lost”. Or was it? What amazing revelations are to come from the immense libraries of the Vatican which can throw a much different light on what some of us regard as “Gospell”?

So I think Barney that you are a laudable scholar. Now maybe ponder on some of the aforementioned.

With much love in your quest and indeed the quest of us all for enlightenment.

Then there is the question of the ‘time’ as it relates to a changing humanity.

As someone who has read aloud and studied, no dissected, the KJV bible I can tell you that there is no way any man had a hand in the words contained therein.
I refuse to believe that the God I worship is incapable of making certain that every word that is to appear in HIS book is not there exactly as He wants it to appear. The smallest words are some of the most important; the one to three letter words.
I will not allow anyone to change my mind. I have found an article which may interest you. It is titled “Why Scientists are Focused on Plant, Animal Genomes”. In the article it states and I quote: “You can think of a genome as an instruction book for building a living thing. Its language is a four-letter alphabet, which stand for the four compounds that make up the innards of the DNA molecule. The order of those compounds along the molecule is the code; it creates “words”.” (John 1:1) “In the beginning was the Word, and the Word was with God, and the Word was God.” (John 1:14) “And the Word was made flesh, and dwelt among us, (and we beheld his glory, the glory as of the only begotten of the Father,) full of grace and truth.” So, the King James Bible, which God gave to us, IS Jesus Christ.
There are 2 strands and 4 four base pairs in man’s DNA – 3 base pairs are alike and one is different. There are 2 testaments and four gospels – 3 gospels are alike and one is different; coincidence? Absolutely not. The bible is full of this type of thing to prove that God’s word, is Jesus Christ. There also exists a number system within the KJV bible that can never have been created by man. It is far too involved. I rest my case and will not allow my mind to be changed for if I doubt God’s word, I doubt God and that I will never do.
God Bless you always,

I don’t see anywhere in the KJV Bible where God stated that He created ‘planets’, ‘universes’ or ‘galaxies’. The only time the word ‘planet(s)’ appears in the bible is when God is admonishing the children of Israel for calling the wandering stars planets and then naming them after their false gods. The etymology of the word planet means wandering star. Who are the wandering stars? (Jude 1:13) “Raging waves of the sea, foaming out their own shame; wandering stars, to whom is reserved the blackness of darkness for ever.” They are the fallen angels. We know that in Revelation 6 and 12 the stars (angels) of heaven will be thrown to earth. If stars are really blazing infernos like NASA (Never A Space Agency) tells us it would obliterate the earth and clearly God does not do that. Stars are angels we are told this a few times in scripture. Jesus is called the ‘Morning Star’ and an angel as well in the book of Revelation.
This is why it ALL belongs to God. All things in earth and heaven belongs to God; we are merely stewards. This is God’s world and it is He who will heal it. 2 Chronicles 7:14 “If my people, which are called by my name, shall humble themselves, and pray, and seek my face, and turn from their wicked ways; then will I hear from heaven, and will forgive their sin, and will heal their land.”
Job gives us a clue about what is over our world here: Job 37:18 “Hast thou with him spread out the sky, which is strong, and as a molten looking glass?” and here Job tells us how the earth looks as the makings of a clay seal with a signet: Job 38:14 “It is turned as clay to the seal; and they stand as a garment.” When Augustine PIcard flew high above the land in a balloon he was asked when he landed what he saw and he replied: a flat earth with a lip. That lip is the Antarctica, as it is called, however it surrounds our world and it is a 200-300 feet high ice wall holding in the waters. There are a LOT of verses in the KJV bible which all prove these things, but don’t take my word for it – go in search of them yourself and learn the truth; the only 100% truth in this fallen world: the KJV Bible alone.
God Bless you all.