THIS IS “NOT” ROCKET SCIENCE – (Part Five)

Here is the FINAL piece in this series, and it will be taking a look Preston James’ last segment of his series.  Located on VETERANS TODAY…, it can be found HERE.

In this final Part 3 of his Long Article he makes suggestions as to how we can actually WIN this battle for ourselves and for Earth!  I am in agreement!

He starts out this way:

If 12% of the public wakes up and becomes populist, the “Agenda of Death and Destruction” being imposed on “We the People” by “Super-elite Deviants” will soon be reversed and America the Republic will be restored.

If 12% or more Americans as in “We the People” withdraw consent from the occupation of America by WZs and their Cutouts through Nuclear Blackmail, America can be taken back from these Draco driven hijackers of America who have used their WZ Cutouts, the Israeli Dual Citizen Traitors to set up Homeland Security as an Israeli occupying force. (4)

One of the realities of Psi-power is that the Group Mind of the masses unifies around a theme of survival as a people and liberation from tyranny, a great power for change emerges. At present it appears that approximately 11% of “We the People” have woken. The SSG realizes they are in a race to establish complete control and are now evaluating options,especially since they were apparently delivered an Ultimatum or Final warning which originated from the Dracos. Alien ETs and their Cutouts the WZs and DHS know that they can never succeed unless they disarm “We the People” the largest army in the world.

The Hunters and sport shooters alone in the Midwest constitute the world’s biggest army once DHS tries to institute Martial Law, transform America into Gaza II, and then start their planned mass-murder of Americans which at the rate they are going can never satisfy their overlords the Alien ET Dracos.

So basically he is saying this:

WE HAVE A ROLE TO PLAY HERE IN OUR OWN SALVATION!

He does not say…., (as almost every channeler does…,)

“Sit back, relax, and enjoy the ride!”

No…, he says that “we the people” have got to “unify” our MINDS and HEARTS in NON-CONSENT!   PERIOD!

They have now turned against their own salvation and the salvation of MANKIND…, by using all of their strength and minds to “protect” a method of communication that has been PROVEN to be both corrupted, and corruptible!

Only the bravest of them have come forward to admit they were used!  In my opinion…, Greg Giles…, who was at least willing to admit he’d been had…, has turned his life around, and is worth saving.  So many others (because of their refusal to admit there is a serious problem with channeling) have now taken on the position of “working for the dark”…, or at the very least…, “working AGAINST the light”…, even though they don’t know that.

It’s time to take our great Republic America back from the foreign hijackers and infiltrators who always put Israel first while they suck the life and wealth out of ordinary hard working Americans.

It is time for We the People to take control back of America and route out all incumbents and corrupted USG officials and Israeli dual citizen traitors, Infiltrators and espionage fronts inside America. Start speaking up to family and friends because the hour is late and we all need to work together to get the truth out and drive evil back into the darkness where it came from. The truth will resonate with “We the People” and cuts through the criminal sociopathy of the soulless WZ Ruling Elite Deviants like a red hot knife through butter.

The Controlled mainstream media is now rapidly dying as many are turning to the alternative media on the Internet where they can find truth.  The following diagram explains the Matrix of World Control and the Hierarchy of World Authority. The World Zionists (WZs) are a very crafty bunch and learned along time ago that if they created two separate forces to war one against the other this created great cover for those controlling both. And that is exactly what the WZs have done, but now they have ordered these forces to combine to take down the whole world. After they are no longer needed, you can bet that the Dracos will quickly dispense with them as they have done to their Cutouts numerous times in the past. It is important to note when the Dracos’ One World domination plans failed in the past they always dispensed with their Cutouts because they served no usefulness anymore.

I agree with his last statement here.   It is very unlikely that these “cutouts” will get the “reward” they were promised!  The Draco’s will throw them under the bus the very second they are not useful any longer. It is truly sad that they can not see this!

It is their greed, lust for power, and low vibration which does not “allow” them to see that THEY TOO will be killed, thrown under the bus…, and gotten rid of by those they are serving.

Just as in the movie: STAR WARS…, and the examples of the SITH…, EVIL  NEVER SHARES POWER.

However…, those who worship Satan…, may have unified for a purpose of having a Satanic “Reality” become manifest here on Earth.

Preston gives us a graph which shows the steps of power in the SATANIC REALITY. 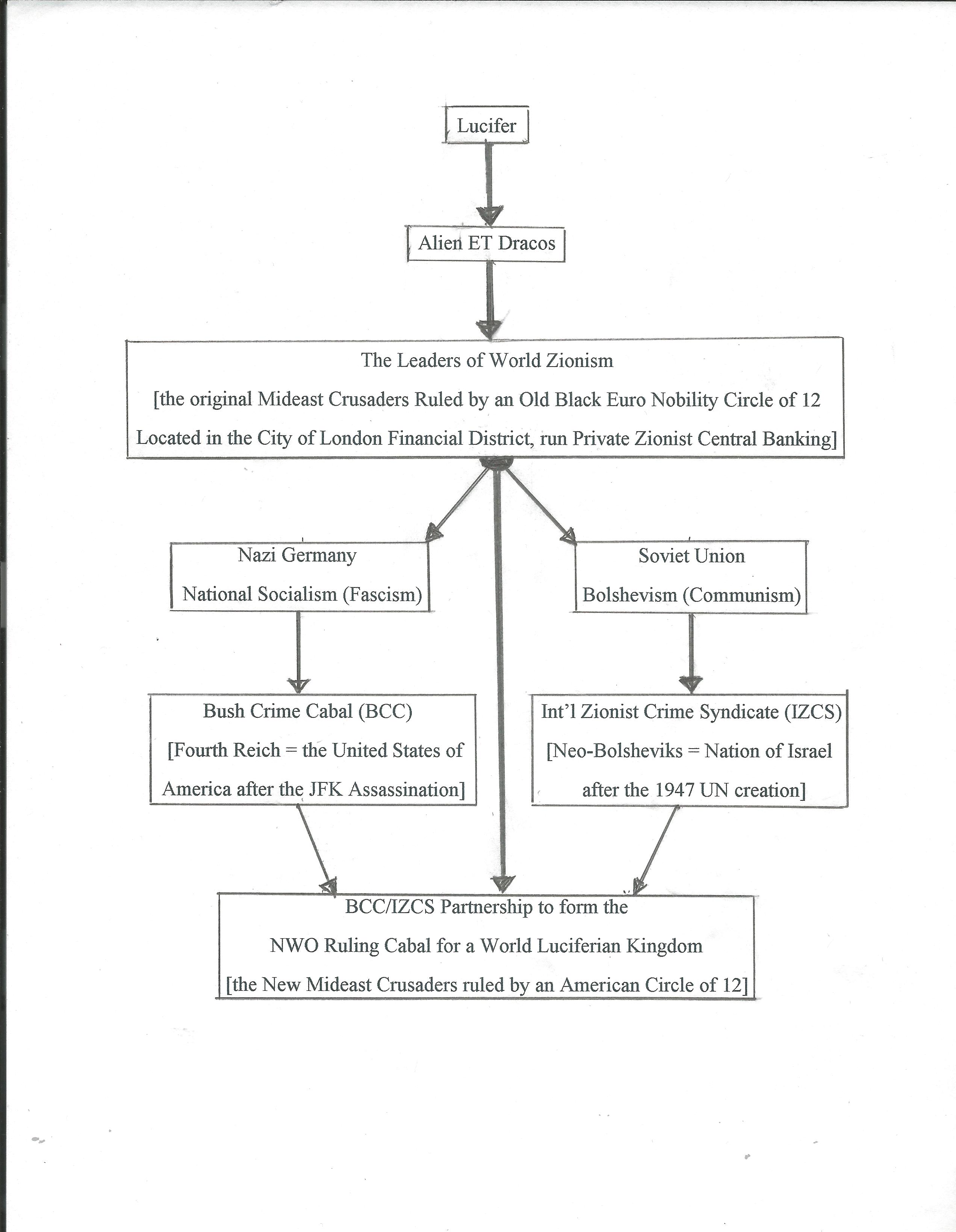 Preston Continues basically saying A SECOND TIME…., that WE HAVE A ROLE TO PLAY in our own salvation…, and when he says: WE MUST TAKE AMERICA BACK…, he is saying we must NOT CONSENT to their plans!

It’s time for the American people to wake up and take it all back from the World Zionist run Neo-Bolshevik Traitors and Infiltrators who are the true “Enemies within our Gates”. These are the same World Zionist Cutouts that hijacked America since 1913 using City of London Zionist Money-Power and debt-slavery induced by their pernicious usury system. These Traitors and Infil-Traitors have taken America to an all time low that must be imediately freversed and it must be done by all of us working together as “We the People.”

It is these same WZ families that have a long history of war for profit, mass-murder of millions and their trademarks are the Bolshevik Revolution and Red Terror, and the mass-murders of Mao in China, both set up the the City of London World Zionists. The Soviet Union fell but the City of London, Israel and Communist China are the last bastions of these evil, soulless haters or mankind and mass-murderers.

Next,  He repeats AGAIN, FOR A THIRD TIME, what the solution to our problem is…  (apparently for the people who just can’t seem to get…, or to fathom, that they have a role to play)!

Or, maybe he is hoping (like me) that there is even just one person out there who is listening!

We the People must speak up and work together to defaet these WZs and their Cutouts and take our great nation America back.

Once awake, “We the People” can be an Invincible Force against these soulless scum and can take it all back. The US Constitution and Bill of Rights as well as natural and Common Law gives us the right to take it all back from these evil usurpers who are using DHS, their Israeli Occupation force inside America, to oppress and tyrannize us, asset strip us, detain us and then to systematically mass-murder all of us as soon as they acquire enough power to do so. Let us expose them for what they are and turn the situation back on them for what they have done to us and our Great Republic and are trying to do in the near future.

Let us say NO to them in every way possible and stand against them on every single issue they try to dominate against us. Let us work together to expose them and drive them out of America forever.

He does “not say” however…,

Sit back…, enjoy the ride.., relax…, outside forces are about to SAVE YOU……

So I guess the question now is this:

Who is listening…, who really gets this…, and whose MIND has not been taken over by the SATANIC AGENDA?

We must look deeper than ever before to see who is really telling the TRUTH and who is not.

THIS IS “NOT” ROCKET SCIENCE!

WITH ALL MY LOVE…, TO THOSE WHO LOVE…