TO MY BEST FANS…

I’ve said it before, and I’ll say it again!

“MOST” of my readers are not the general public!

And as truly SAD as that is…, there is nothing I can do about it.

I’ve got more people in the Defense Department and other agencies reading what I write…, than there are regular people.

So…, what does that tell you?

Would they even bother reading what I’m writing if most of it was not true?

Why did Field McConnell of ABEL DANGER call me personally on the phone and tell me that certain people in Annapolis Maryland (The Naval Academy) were reading my blog daily??

The reason I am bringing this up now is that according to WordPress Stats…, my blog is not growing or expanding in readership…, and has barely increased it’s numbers in over a year.

This is not a “big deal” unless you want to call attention to how many people care very little about the TRUTH.

There may be many people who come here to read, and who think I’m off my rocker when I write about “Angels” and “Demons”…, Dark Magic.., and “Demonic Entities”…

But if this is the way you feel…, I would ask that you view a few of the videos done by Steven Quayle, (A Christian) who has talked on the phone with many very high level military people who have told him that they are literally fighting against DEMONS…, (along with Giants) and all manner of things that most people could not fathom in their wildest dreams.

This has all happened before in Earth’s History (in Ancient India) where Demonic Entities known as the Rakshasa fought against humans on Earth.

Ravana, a rakshasa, is the king of Lanka. He was son of a sage named Vishrava and daitya princess Kaikesi.

After performing severe penance for ten thousand years he received a boon from the creator-god Brahma: he could henceforth not be killed by gods, demons, or spirits.

He is portrayed as a powerful demon king who disturbs the penances of rishis.

Ravana was an oddity because he was supposed to have ten heads…, and is always shown that way in Hindu images. 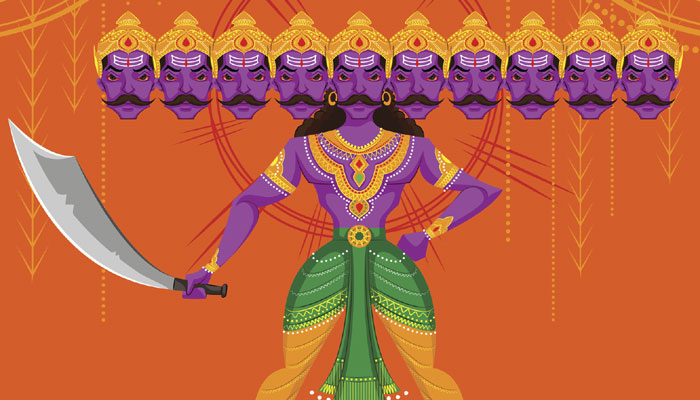 As crazy at that sounds…, what about “monkey” people.., or “lion people” or “bird people” ?

Who is to say what is really going on out there because almost EVERYTHING is hidden!

The real problem as I see it is that regular men and women have forgotten to PRAY every single day!

PRAYER is the only way to fight what is (for the most part) a SUPER NATURAL WAR between good and evil!

Once again…, the Luciferian NEW AGE has conned good people into believing there is NO SUCH THING as GOOD and EVIL and therefore they have STOPPED PRAYING!

Well…, why would one ever think of “praying” if there is no such thing as EVIL??

I keep reminding them every single day that there are countless reason why they NEED TO PRAY!

I would not doubt that several prominent Illuminati are also reading my blog – just to see how much they are being exposed!

But…, this happens ONLY becuase they know how TRUTHFUL all this stuff really is.

The general public…, who still follow many blogs and videos being done by con artists…, do not like what I write…, because it does not SOUND like the stuff that everyone else is writing!

But you have to realize that I do NOT follow other writers and other bloggers…, just so that I can then repeat what they write only because it SOUNDS GOOD…, or SOUNDS LIKE SOMETHING I want to see happen.

I do my OWN research…, and then write what needs to be written based upon that research.

This is real intel…, NOT CHANNELED INFORMATION coming from one of a million out of body entities who have no concern about people living here on Earth.

So there you have it!

My real fans are not those who are still looking for the TRUTH (because once they come here…, they discount what I write as false based upon what other people are writing).

My true fans (sadly) are those men and women who already KNOW WHAT THE TRUTH IS…, and know just how accurate what I am writing really is!

So for my TRUE FANS…, the White Hats, the Military, the Off Worlders…, and the Time Travelers…, here’s to you!   If you were not reading my blog…, I’d hardly have any readers at all!

Over 6 years I have made more then 1950 newspapers for free. I have e-mailed them to friends with all the links and so more. I did it because they wanted to learn more. I stopped in July this year because I felt they did not read the newspapers anymore and did not go to the sites I recommended to them. I have asked them why not. They thought it was too much and too heavy.

I also lost friends and since then I never have heard anything from them.

I have done my best. What I do now is I make documents and spare them for when anybody wants to know more about the real world we are in. I also speak to people “when” they wil listen to me and recomment this site.

Manushya Gana: This is seen in many human beings. People who work and live for their family and relatives will fall under this group. Such kinds of people do regular works, and if anyone approaches them for any help, they will pretend like they are busy. In other words, these people possess mixed qualities.

Deva Gana: They will possess divine nature, and these persons can be seen rarely. Such people work for others without any expectations. They will look into other problems; suggest ideas though they cannot work on the issue due to their busy lives. On the whole, they mostly care for others. Overall they are soft-spoken and generous.

Rakshasa Gana: In many humans, this demonic nature can be found. These people will be very selfish, and they won’t have the helping tendency. When comparing the other two ganas, these people will have more advantages. With their powerful sixth sense, they can recognize the negative energy easily and early. They are cruel.

Many people are born with Rakshasa Gana and in Hindu Tradition they marry with each other Ganas, Ravana was of Rakshasa Gana but was the biggest worshipper of the Shiva. Majority of people in India worship Ram but Ravana is worshipped in some places as well, some scripture says he was a Cannibal but some refuse of it.

Anyway Thank You for this information.

I read your blog daily, Its resonated on many occasion many thanks.

One thing I’m pretty sure of, is that everything I thought I knew growing up, I didn’t.

As Socrates said, I know that I know nothing.

Thanks for continuously keeping on, it’s appreciated.

I read you’re blog every day Bradley and i’m fascinated with everything you write. I have learned a lot from you. Thankyou. Just a member of the general public.

Bradley Loves You
Reply to  angie

All my love to you Angie! I really appreciate that!
Do me a favor…, share links to my blog on Twitter and other Social Media platforms and maybe I will get a few more readers just like you!!