There is a bigger picture to what we are seeing!  Sadly, even those who see it will most likely DO NOTHING.  ~ Brad 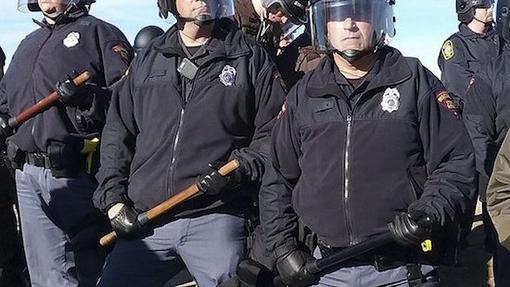 We must, indeed, all hang together, or assuredly we shall all hang separately.”

It’s one of the oldest military strategies in the books, and it’s proven to be the police state’s most effective weapon for maintaining the status quo.

How do you conquer a nation?

Distract them with football games, political circuses and Black Friday sales. Keep them focused on their differences—economic, religious, environmental, political, racial—so they can never agree on anything. And then, when they’re so divided that they are incapable of joining forces against a common threat, start picking them off one by one.

What we’re witnessing at Standing Rock, where activists have gathered to protest the Dakota Access Pipeline construction on Native American land, is just the latest incarnation of the government’s battle plan for stamping out any sparks of resistance and keeping the populace under control: battlefield tactics, military weaponry and a complete suspension of the Constitution.

This is what martial law looks like, when a government disregards constitutional freedoms and imposes its will through military force.

Only this is martial law without any government body having to declare it.

This is martial law packaged as law and order and sold to the public as necessary for keeping the peace.

These overreaching, heavy-handed lessons in how to rule by force have become standard operating procedure for a government that communicates with its citizenry primarily through the language of brutality, intimidation and fear.

What Americans have failed to comprehend is that the police state doesn’t differentiate.

In the eyes of the government—whether that government is helmed by Barack Obama or Donald Trump or Hillary Clinton—there is no difference between Republicans and Democrats, between blacks and whites and every shade in the middle, between Native Americans and a nation of immigrants (no matter how long we’ve been here), between the lower class and the middle and upper classes, between religious and non-religious Americans, between those who march in lockstep with the police state and those who oppose its tactics.

This is all part and parcel of the government’s plan for dealing with widespread domestic unrest, no matter the source.

A 2008 Army War College report revealed that “widespread civil violence inside the United States would force the defense establishment to reorient priorities in extremis to defend basic domestic order and human security.” The 44-page report goes on to warn that potential causes for such civil unrest could include another terrorist attack, “unforeseen economic collapse, loss of functioning political and legal order, purposeful domestic resistance or insurgency, pervasive public health emergencies, and catastrophic natural and human disasters.”

Subsequent reports by the Department of Homeland Security call on the government to identify, monitor and label right-wing and left-wing activists, military veterans and sovereign citizens as extremists (the words extremist and terrorist are used interchangeably in the reports).

These reports indicate that for the government, anyone seen as opposing the government—whether they’re Left, Right or somewhere in between—is labeled an extremist.

SO WHERE EXACTLY DOES THE “NEW AGE BULLSH*T” PART OF THIS VIDEO START (?)

Love Truth. I have shared this far and wide.