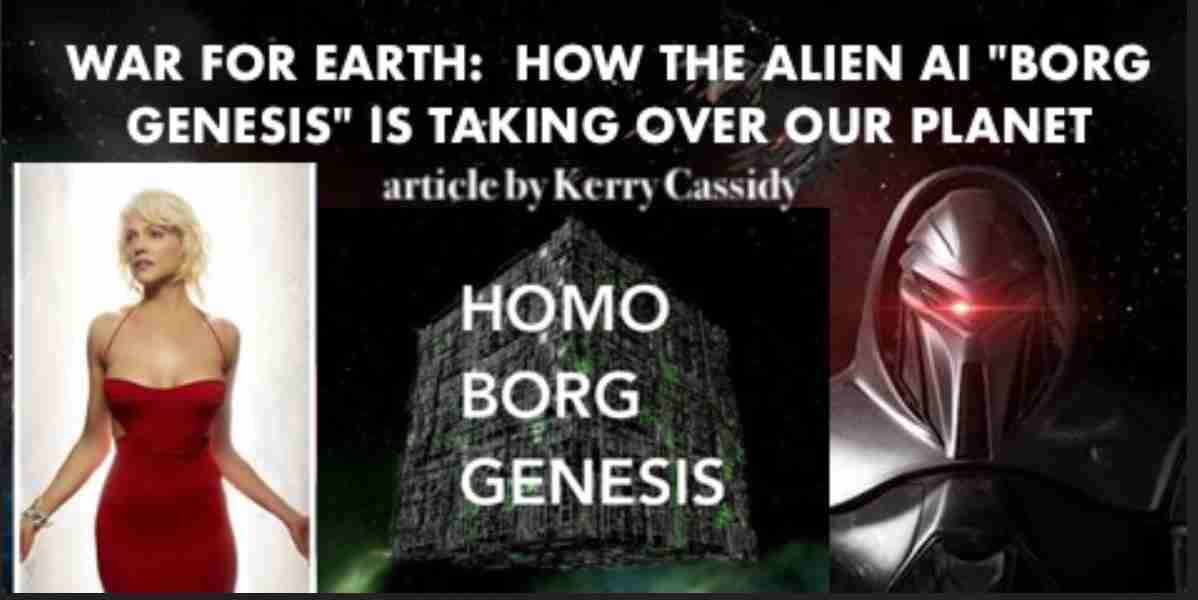 WAR FOR EARTH: HOW THE ALIEN AI “BORG GENESIS” IS TAKING OVER OUR PLANET

The following is an attempt to connect the dots concerning what is happening to humanity and the threat from Reptilians and Artificial Intelligence. You are encouraged to do your own research on these subjects.  The survival of humanity may depend on it!

THIS REMOTE VIEWER SAW AN INCIDENT IN WHICH A MILITARY WHITE HAT  BATTALION BROKE INTO AN UNDERGROUND ARENA WHERE 3 CHILDREN WERE BEING TORTURED IN A CIRCUS LIKE ATMOSPHERE…THEY KILLED THE AUDIENCE AND RESCUED THE CHILDREN…THIS IS A DIAGRAM OF THAT INCIDENT:

The viewer said that 60% were killed but others remained hidden…This is excellent visual evidence of the White Hat operations ongoing:

Controllers of Reptilians:  This remote-viewing documentary describes the group that ultimately control the Reptilian extraterrestrials in their drive to expand across the galaxy. It shows the Farsight Remote Viewers looking at the expansion throughout the Milky Way Galaxy and their controller is an Artificial Intelligence.  This coincides with my own intuitive understanding gained over many years that the Draco-Reptilians and Greys are controlled by AI. They have already taken over other galaxies.  They have only partially taken over the Milky Way Galaxy. The Pleiadians have been stating this for many decades. It is one of the primary reasons they have interacted with humans.  Their objective has been to educate and assist us in becoming warriors to assist them in their war against the Reptilians. For more on this see my interview with William Tompkins.  https://projectcamelotportal.com/2023/01/14/william-tompkins-navy-sanctioned-disclosure/

The above videos demonstrate why we are dealing with a massive Reptilian takeover agenda here on Earth mirrored in the current trend toward a Totalitarian/Nazi i.e. Fascist NWO.  Clearly the Alien AI controlling the Reps has made great inroads into the members of the ruling classes that are among the NWO here on Earth.

This is not something that can be dealt with by simply taking out the leaders of the NWO.  Because their influence is pervasive and handed down to younger generations around the world.  Armies of sleeping recruits brought up on mind control and various forms of addiction.

The White Hats believe they need to hide this reality from the masses and in that way they are doing a disservice to humanity.  Keeping people in the dark about this threat to humanity and our Planet is dangerous to our future.  People can handle the truth and need to know.

One reason the White Hats want to keep the actual threats to humanity secret is so they can deal with a portion of it themselves without oversight or wasting time arguing over methods of execution.  Such as arresting top leaders and perpetrators and executing them in military tribunals or even just shooting on sight.  However this has limited effect.  Again because the threat is not only Reptilian but also Alien AI and galaxy-wide… even covering multiple galaxies.

Due to the critical extended influence already in effect on Earth of this ‘alien intelligence’ and the Reptilian invasion it is crucial that all of humanity wake up to this reality instantly.   The White Hats cannot control or limit the enemy (Borg Genesis — the name the NWO has given it)…simply by killing a few members.  They actually need the critical mass of awakened humans to assist them mentally and emotionally in their quest.  And to do that they must communicate so to expand the awareness of who the enemy is and why we need to come together on Planet Earth to fight it.

If you don’t believe or understand how the VAX and  covid19 bioweapon were designed by scientists who were in communication with the Alien AI= Borg Genesis  and that it is part of a Transhuman takeover agenda, then you are unaware of the real truth.

My knowledge of this comes from my own downloaded info combined with whistleblower testimony leading in this direction for many years.  Some of the whistleblowers who focused on AI, transhumanism and the Reptilian takeover are Cyrus Parsa, Captain Mark Richards, William Tompkins, Duncan O’Finioan and other super soldiers and many more who I have interviewed in the over 18 years I have been on the trail of this agenda.

PLAN-DEMIC, DOD BIOWARFARE PROGRAM DEPLOYED WORLDWIDE.  As I noted in this recent article, the Nano Graphene Oxide is proven to be in all the vaxes including the so-called PCR tests.  Prior to that I have a powerpoint presentation I gave during the summer with slides showing how prolific the Nano is throughout our world…Being used in our food, water, clothing and chemtrails… and industry.

Nano Graphene Oxide is the strongest material on Earth.  There is a great deal of information on the web…just search the term.  What they won’t tell you is that it is quite possibly the same as what we call “black goo”  which was also depicted in the famous X-files TV series.   Black goo emerged during the FALKLANDS WAR and was the real reason for the war.  It is apparently embedded in the Earth.  Said to be left here by an alien species then activated remotely.  It is conscious and sentient.  It was responsible for the deaths of the MARCONI SCIENTISTS during the time of the Falkland war.  See the article by researcher David Griffin that covers this strange anomaly. https://concen.org/content/bizarre-marconi-deaths-et-bases-1980s-falklands-conflict

Black goo re-emerged and was said to be eating the bottom of boats in the GULF which was publicized falsely as the “Gulf Oil Spill”.  A product known as Corexit was supposedly used to stop it.  I have several whistleblowers who revealed the real truth on this and their testimony corroborates with each other.  These are people who don’t know each other and are mainly unknown to the public. What seems to have happened since then is that this substance (black goo) has been reverse-engineered to be used as nano graphene oxide.  I was told is even part of certain OIL you use in your car and If you touch it in its liquid state. And that like the Marconi scientists, your body eventually gets taken over by it.  The Marconi scientists who died all died mysteriously by committing suicide in totally alien type ways.. All of the Marconi deaths are documented in writing on the RENSE.COM website…

See the rest of the article HERE:

WAR FOR EARTH: HOW THE ALIEN AI “BORG GENESIS” IS TAKING OVER OUR PLANET

MUST WATCH VIDEOS – THE JAB IS A BIO-WEAPON