WHATS “REALLY” HAPPENING OUT THERE? (An Honest Look)

This is going to be an honest assessment of where we are at in our present journey.

It will be a short breath of fresh air in the long and very carefully orchestrated drama that is unfolding in front of us.

Very little of what we are being told (even NOW)…, is the actual TRUTH!

Before that…, we were literally at ZERO TRUTH being told to the public!

Donald Trump and his efforts to Drain the Swamp have given us only a very tiny glimpse of the comprehensive corruption – secrecy – manipulation of every Government around the world, and the callous disregard for humanity and human life that is currently taking place on this planet.

Regardless of what you think you now know…, WHAT IS STILL HIDDEN is enormous!

We (the people) have been conned, used and abused in ways that (IF HONESTLY KNOWN) would make every man, woman and child want to chase down these perpetrators and hang them from every tree and lampost that could be found!

THEY ARE JUST THAT EVIL!

Those that have opted to be complicit with and enjoy the corruption are LEGION!

They are EVERYWHERE and there is not a man, woman or child in the world that does not personally KNOW someone who was working against all of the rest of us (humanity) and profitting off of the scheme!

Decades ago, when it was seen that the hold of the Religious Institutions and the Clergy was slipping on the people all over the world (and these people were “waking up” to the lies of the past) …, it was decided that MIND CONTROL would have to be used on every single man, woman and child on the Earth!

Starting in the 1950’s – all US Intel Agencies (THE SWAMP) got together and decided that no living and breathing human being had a “right” to know the TRUTH about anything…, and therefore a massive campaign to LIE TO and literally DECEIVE THE PUBLIC ABOUT EVERYTHING was instituted by the CIA, NRO, FBI, and even the NSA.

The deception was comprehensive!

It was instituted in the media, the workplace, schools, universities, within institutions and corporations…, in movies and on television…, it was EVERYWHERE!

John F. Kennedy found out…, and was going to put a STOP to it.

Since the 1950’s – this purely Governmental (no longer Religious) MIND CONTROL has gone world wide!

Every country on the entire planet participates in MIND CONTROL…, and the control center for all of this MIND CONTROL…, is the SECRET SOCIETIES that are behind the VATICAN!

The MOCKINGBIRD MEDIA is simply just one of over a hundred secret programs and other advanced tools (that are currently being used) to bamboozle, confuse, and literally CONTROL the perceptions of everyone on Earth!

No longer enough to just “tell a lie” and try to get people to believe in a CON (as was done in centuries past) the “AGENCIES” (the SWAMP) has crafted new tools for MIND CONTROL based in advanced broadcast technology!

VOICE OF GOD/VOICE TO SKULL broadcast technology…, plus physical and astral implants that were literally put or injected into every single human being (placed there by doctors and dentists who did what they were told and “followed orders”)…, caused human beings to hear “thoughts” that were NOT THEIR OWN.

May I remind you here that MIND CONTROL is the greatest CRIME against GOD/PRIME CREATOR that exists anywhere in the entire Universe!

You may not think so…, but I can assure you that it IS!

Because it directly challanges his GIFT of FREEWILL that was given to each of his creations out of pure love…, and was decreed at the beginning that it would never be interferred with.

It is the “RIGHT” of every human being (every soul) – granted by GOD himself to freely choose what he or she will or won’t do…, based up their own level of learning and upon a PRIVATE PROCESS of honest thinking and logical deductions that takes place within their OWN MIND!

THIS IS THE DEFINITION OF FREEWILL….

By hacking the MIND…, and by installing or placing programs or thoughts directly into a human beings mind that these HUMANS did not choose, nor wish to create…, the AGENCIES and the ILLUMINATI (Secrect Societies) behind them…, STARTED A WAR WITH GOD!

To you…, who may not understand the repercussions of such things…, let me be clear here…, that this WAR WITH GOD…, has indeed been initiated…, and it is now in the process of being brought to EARTH.

Why do you think that SATANISM and LUCIFERIANISM has come so close to the forefront that even the common man can SEE IT?

Because the very people hiding behind the scenes…, the very people who pull the strings of these Secret Societies that are directing things – are Satanists…, and they wanted to start a WAR WITH GOD!

The “Agencies”…, and the mid level management who use MIND CONTROL technologies had no idea that their “higher ups” and their “bosses” real intention was to use them (like pawns) to piss off and thus start a UNIVERSAL WAR with the CREATOR of all that is!

This is why we are now seeing the NSA so quickly turning around and once again taking the side of the people!

They finally see who these men and women behind the scenes are!

The NSA is now working AGAINST all of the other agencies (CIA – FBI and many others) because they have realized that they were duped!

The NSA knows they were used like pawns by hidden beings behind the scenes to commit COSMIC LEVEL CRIMES that would bring the wrath of PRIME CREATOR directly unto this planet!

So…, how did it all change?

WE ARE NOW IN THE MIDDLE OF A “TIME TRAVEL WAR”

One of the many tools that were being used by THE SWAMP to control everything and everyone was the classified and militarized technology of TIME TRAVEL and QUANTUM ACCESS!

This single tool (more than any other) allowed complete and total control over all of our lives and our options for the last 60 years!

Effectively we have been living inside of a “Time Travel Prison” of sorts…, where those who had access to this particular advanced technology were using it to STEER anything and everything that happened on Earth in order to keep humanity in ignorance and in chains!

He won the election because of this!

At this point…, what we are seeing playing out in the public arena and in the NEWS MEDIA, is the tit for tat attacks and strategies of the larger TIME TRAVEL WAR!

This is where both sides of the on going battle are using Quantum access techology and Time Travel to try to get the upper hand!

The CENSORSHIP were are seeing now is the result of Donald Trumps election and has been initiated as a result of what they see coming from their access to future events!

TRUMP is winning (at the moment) because his side controls the Presidency!

This only occured, because the other side (which had been in power ever since JFK was shot)…, got lazy and complacent!

THEY NEVER THOUGHT SHE WOULD LOSE

(I guess they spent way too much time on Pedo Island having sex with little kids to notice that Trump’s team had come onto the TIME TRAVEL scene that they thought they were in total control of!   They were, shall we say, pre-occupied!)

Even if the larger public has NO CLUE just how deep this rabbit hole goes…, and just how huge this BATTLE for Earth really is…, Q – Anon knows!

You can find it everywhere in his posts and the crumbs as he puts it out there in terms that can not be mis-interpreted!

WE ARE FIGHTING TO FREE NOT JUST AMERICA…, BUT ALL OF MANKIND… 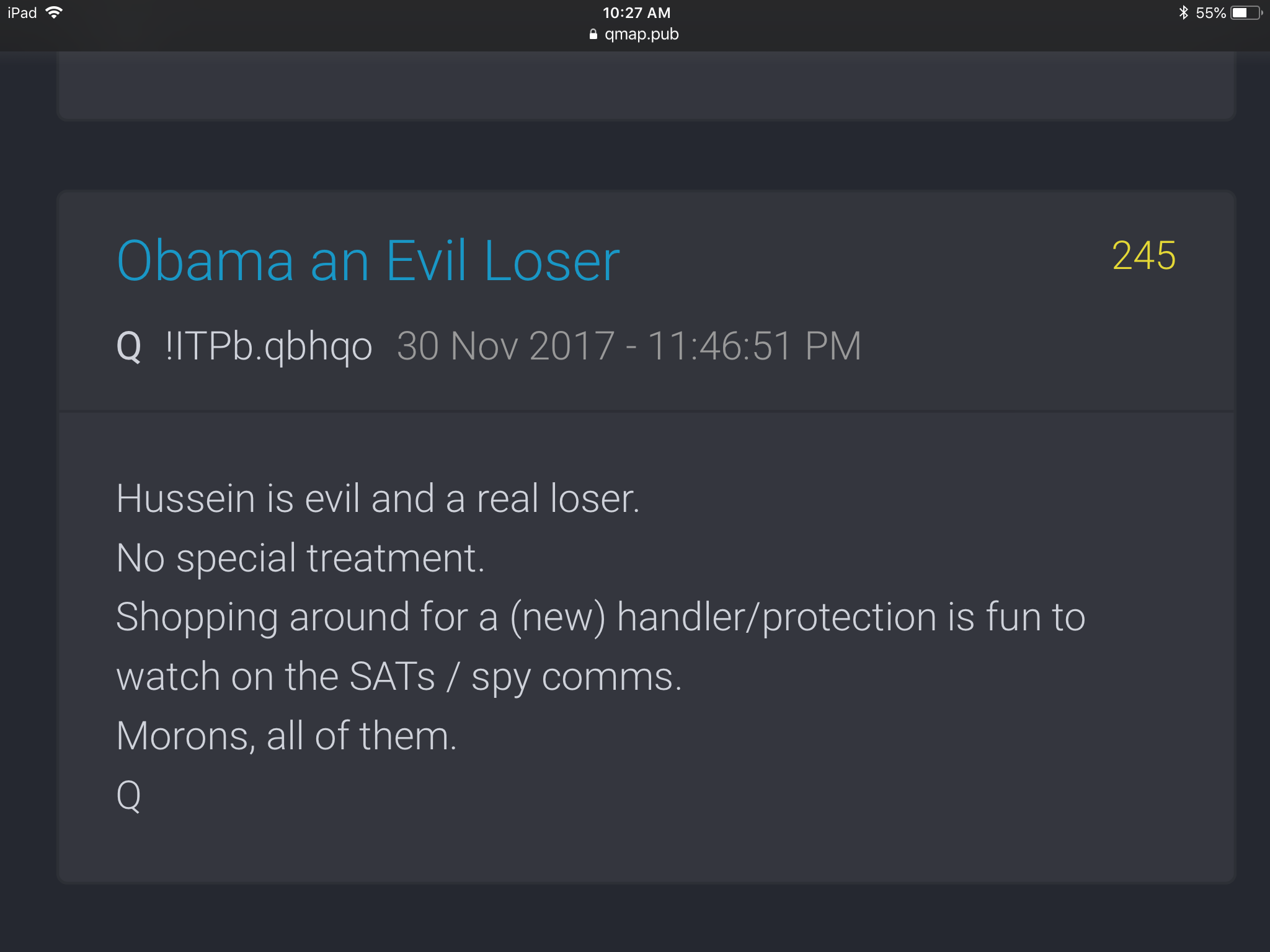 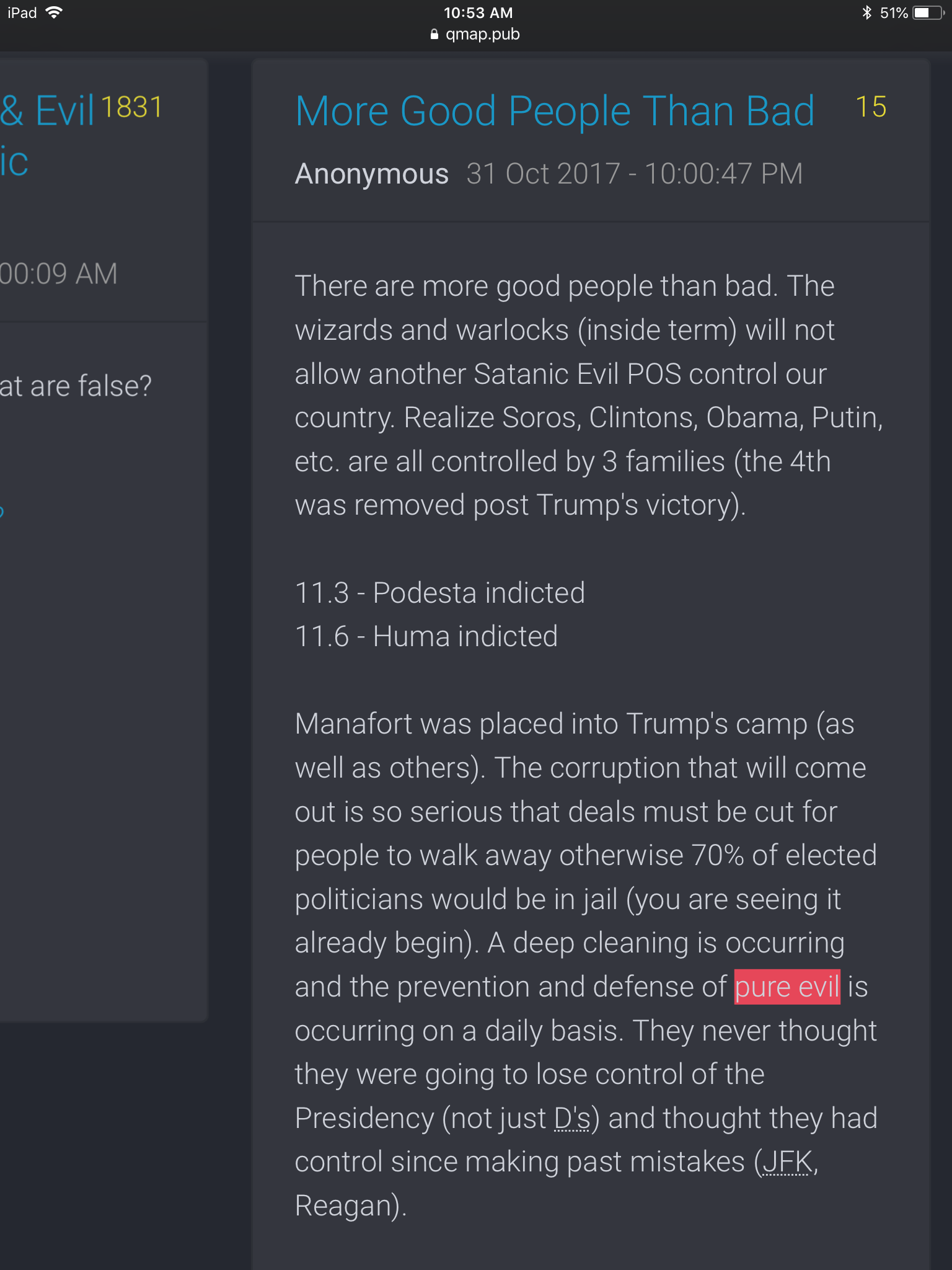 That it is not just the Democrats we are fighting, but the SATANISTS!

These are men and women who WANTED to do battle with GOD/PRIME CREATOR!

They wanted to use the rest of us (as FODDER) in that battle, and use us as human shields (thinking to place us in a permanet position of SLAVERY on Earth) and take control of the entire planet!

MIND CONTROL was their weapon of CHOICE!

Beyond this…, (as I’ve said) this battle goes OFF WORLD and into other levels and dimensions!

This…, my loyal readers is an HONEST ASSESSMENT of some of what is happening behind the curtain!

There is far more…, and it concerns what is coming in space!

For now…, think on this deeply….

This is a very good expose that resonates with truth. I stand strong in the face of these evil-doers and demand the full control of my free will. I do NOT CONSENT being controlled, used, manipulated, or lied to in any way by those who wish to do harm to humanity.

All that said, I really urge you as an author and disseminator of truth to stop using political definitions when you write about the enemy. It is not “the Democrats we are fighting”!! The evil exists on BOTH SIDES of this political illusion. The Bush family is Republican. John McCain was Republican. PLEASE! This rhetoric discredits your writing by revealing a clear bias. You’re allowing yourself to be labeled and therefore dismissed by a certain audience that might otherwise benefit greatly from what you have to say. Please consider this.

I firmly believe this to be true that we are in the middle of a time travel war. On a personal level there have been far too many “occurrences” and people popping into my life to totally derail me financially and otherwise. When this is over (..and it will be) I want to see the unredacted file on my life and the sabotage that was done and by whom and WHY? Those that are “not human” need to go and forever.